< Back to Samuel Atcherley’s true and perfect inventory – Part 1

Our ‘guided tour’ of the house of Samuel Atcherley [

], aided by the “true and perfect Inventory” of his possessions taken in 1731, continues. Once again, to save space the items listed below are not set out in the same format as in the inventory, but they follow the same order and all original spellings remain unchanged, including the use of ‘ff’ to represent an upper case F.

A parlour, according to the 1854 publication Exercises on Etymology by William Graham, is “literally, a room for conversation; from parler (French), to speak …”. The earlier Universal Etymological English Dictionary (by Nathan Bailey, published 1773) describes it as “a low Room to receive company in.” With two tables and a dozen chairs, Samuel Atcherley’s parlour was equipped a to receive a good number of guests. We can only speculate as to how often (and how many) guests were accommodated therein, what the subjects of the “old Pickters” (pictures) on the walls were, and what toys Samuel had upon his mantelpiece.

Samuel had no young children of his own in 1731; his only child, John, was then in his late teens. He did however have nephews and nieces, the children of his “Dearly Beloved Brother Roger Atcherley” and it is possible that Roger took them on trips from Shrewsbury to Sowbath from time to time to see their uncle Samuel. The ‘toys’ on Samuel’s mantelpiece may not have been children’s playthings however. The term was quite possibly used to described ornamental or decorative trinkets intended for the delight of adults. A list of commodities in a pamphlet dated 1738 includes “Tin, Lead, Leather, Toys of Gold and Silver, hard Wares of all sorts …” while another publication from 1719 refers to “Hatbands, Feathers, Fans, Girdles, Hoods, Masks, Looking-Glasses, Watches, Pictures, medals, Cabinets, Cases, Bracelets, Tablets, and other Toys”.

The mantelpiece, of course, indicates the presence of a fireplace – but the lack of a grate, fender or fire plate (all of which were present in the kitchen) suggests the absence of a fire, at least when there were no visitors.

The presence of a cupboard here is not a surprise. The hops, one of many indications that brewing took place in Samuel Atcherley’s home, well, why not keep them in the pantry. But the wheels? I find myself imagining Samuel’s wife tutting loudly, if they had been stored in the pantry before she passed away! 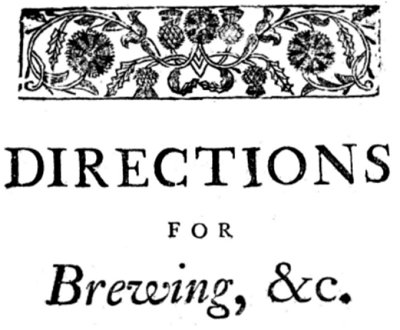 evidence of brewing is found in the cellar, in the form of barrels, stillages (racks for supporting the barrels, or casks of ale) and bottles. There was no shortage of guidance in print for those wishing to make their own beer. One such publication was A Guide to Gentlemen, Farmers, and House-keepers, for Brewing the Finest Malt-Liquors (written by “a Country Gentleman” and published 1727 in Dublin). According to the preface to this tome: “middling ALE, Brew’d of the best Malt, Boil’d, Fermented, and Depurated, according to Art; […] such Liquor is the most comfortable, and to be coveted Drink, the World perhaps ever yet found out […] Thus it quencheth that most insuperable Passion of Thirst, refresheth the Bowels, relieveth the Spirits and proveth a true Cordial in most outrageous scalding Fevers.”

Brewing required water, malt (which we will find later in the Corn Chamber), and hops (which, as we have already seen, were stored in the pantry). The ‘Country Gentleman’ of Dublin recommended that “Hops must be bright, well-scented, will dry’d, cur’d, and bagg’d; and, generally speaking, are best about a Year old.”

Lack of cold storage, particularly in the warmer months when production was at its peak, meant that in Samuel’s day (and for more than a century after) milk could not be transported over great distances, nor kept for any great length of time after its production for later consumption locally. Butter and cheese on the other hand could be safely stored for longer periods, making such dairy products more marketable commodities.

The parish of Stanton on Hine Heath, where Samuel had his home at Sowbath, fell within the southern part of the area of Cheshire cheese production. Shropshire historian Barrie Trinder has noted that inventories dating from the late 1600s and early 1700s, from nearby Shropshire parishes, “describe well-equipped dairy farms, with relatively large milking herds, producing cheese as a cash product within a mixed farming economy.” Samuel, who (as we will see later in his inventory) owned 12 cows, was far from being a large dairy farmer (other inventories mentioned by Trinder detailed dairy herds ranging in size from 13 to 137). Yet he was, I am certain, producing cheese commercially as it appears that he had over half a ton of it in his cheese chamber.

The cheese presses in Samuel’s dairy had a self-explanatory use (photos showing what they might have looked like can be found on the website of the University of Reading, see objects 51/1246 and 58/69). The ‘wooden ware’ found there was perhaps also associated with cheese manufacture, and the scales and weights were no doubt used to quantify the output before it was sold. But what were ‘scarches’? While they may have been items otherwise known as sarches (items made of bristles, probably for scrubbing) I suspect that they were actually sieves or strainers (more often referred to as serces or searces) through which the milk used for cheese-making was first run.

Having found wheels in Samuel’s pantry, perhaps we should not be surprised that his dairy chamber contained nothing related to dairying. Hurds, or hards, were the coarser part of hemp or flax, separated from the finer elements. Barrie Trinder has written: “Inventories show that in almost every part of Shropshire flax and hemp were grown […] The Crops were retted, scutched with tewtaws, combed with heckles, and spun into yard in the homes of the growers, after which the yarn was taken to professional weavers to be made into cloth for use as bed or table linen.” From the hurds, hurden sheets could be made.

The Green Room appears to have been Samuel’s bedroom. Here we find a bed, two bedsteads, a dresser, a coffer (a wooden chest or box in which clothes and other valuables were stored), another box, a joyn stool (see the list of items found in Samuel’s kitchen), and the dressed flax and hemp from which the hurds in the dairy chamber had probably been removed. 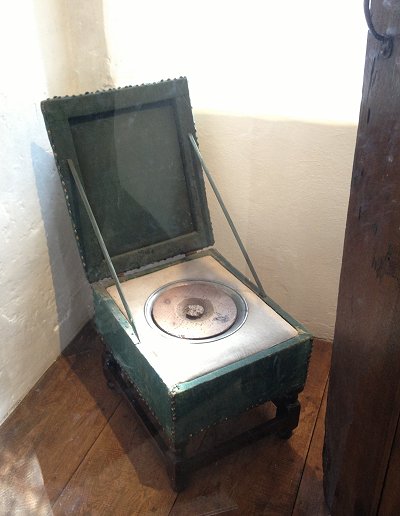 We also find the possessions which, I think, mark this room as Samuel’s own. First, his clothes or ‘wearing apparell’. And second, his ‘close stool’.

Catherine Simpson provides a good description of the close stool in her contribution to a series of blog posts, Shakespeare’s World in 100 Objects: “Also referred to as a ‘night’ stool, ‘necessary’ stool, or ‘stool of ease’, these objects were actually toilets in disguise. At first glance their primary function may have been overlooked when entering a room. However, the piece of furniture contained a hinged top that opened to reveal a large circular hole, within which a chamber pot […] was placed. For comfort during the more prolonged occupations of the stool a cushion could be fitted around the hole.” The photo above is of a close stool at Plas Mawr in Wales, which has a lid over the hole above the enclosed chamber pot.

This seems a good point at which to bring Part 2 of our tour of Samuel Atcherfley’s home to a close. You may continue to Part 3 at your own convenience.

Picture credits. “Directions for Brewing” from A Guide to Gentlemen, Farmers, and House-keepers, for Brewing the Finest Malt-Liquors. Copyright expired. Close stool at Plas Mawr, adapted from a photo taken from Wikimedia Commons by Hchc2009 (both the original image and my adaptation are available for reuse under a Creative Commons Licence.