I was six days from being 9 years old the day Pearl Harbor was bombed, nearly 74 years ago. I was an orphaned child of six years then. We boys, while standing on our patio after 7 a.m., following breakfast, looked up to see rows of low-flying airplanes marked with solid red painted circles on their wings headed in the direction of Pearl Harbor and Hickam Army Airfield. The sky was filled with puffs of smoke we guessed were from ‘big guns.’ 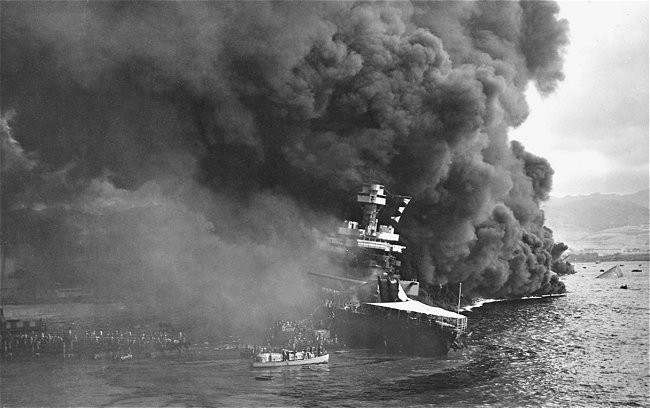 ] (who was in turn a son of Dr John Atcherley and Mary, née Kinimaka). His mother was Ida Germaine Kahananui Atcherley, née Yowell [

]. Sam senior and Ida had married at Honolulu on 7 March 1931; Sam junior was their second child, daughter Leona Merle Atcherley [

] having been born on 3 November 1931. The first birthday of Samuel L Atcherley Jr was celebrated, along with the third birthday of Donald Inouye, at a luau in the beer garden of the Oahu Ice Company at Kaneohe, attended by about a thousand guests. Entertainment for the occasion was provided by “the Schilling group” (Sam’s mother was one of the group’s three members) and the Harmony Seven orchestra.

Sadly, the marriage of Sam’s parents hit the rocks and the divorce of “Samuel Atcherley from Ida Y. Atcherley” was granted on 15 October 1935. This, presumably, explains why Sam Atcherley junior was brought up and educated in an orphanage from the age of three. The institution was evidently a Catholic one, based on Samuel’s recollections of the day Pearl Harbour was attacked in 1941. Continuing from the opening paragraph above:

Six of us skipped Mass at 8 a.m. that morning to take a chance at climbing nearby mountains to have a look. All we were able to see were walls of heavy gray and black smoke and fire and flames everywhere there. Whistling overhead bullets kept our heads down most of the time. Ford Island Navy Airfield was on fire everywhere. We were barely able to see any ships that had taken a direct hit from bombs or torpedoes through the walls of smoke, and after more than an hour, we decided to leave.

Sam and his companions returned to their orphanage. This would have been the Kalihi Orphanage which was named for the valley above Honolulu in which it was situated; the institution took in boys and girls. For missing Mass, and for running off without permission, the boys were punished. On top of that, they were not allowed to receive their “once-a-year major Christmas gift” and so “watched tearfully” as the other orphans opened up their gifts on Christmas Eve.

According to Claire McCaffery Griffin (in her 1996 paper, The Story and Style of the Kalihi Catholic Orphanage), “The heart and soul of the construction of the Catholic Orphanage in Kalihi was Bishop Libert Boeynaems (1857-1926), the Apostolic Vicar of the Islands since 1903 and titular as well as actual head of the Catholic Mission in Hawaii”. His plan, first mooted in 1906, was to build “an orphanage for the sons and daughters of parents suffering from leprosy”. The institution was opened on 29 September 1909, with an official blessing and dedication taking place three days later. It was staffed by Sisters of the Congregation of the Sacred Hearts, and supported entirely by the Catholic Mission of Hawaii until 1918. After that time, the General Welfare Drive became the main source of funds, with guardians of the ‘inmates’ requested to make contributions.

It is clear that most (if not all) of the children at Kalihi were, like Sam Atcherley, not truly orphans but children who were separated from their parents for welfare reasons. A report on the care provided by the orphanage, in the Honolulu Star-Bulletin of 7 November 1930, stated: “Children are admitted through the board of child placement and the court, and emergency cases through the Columbus Welfare Association.” 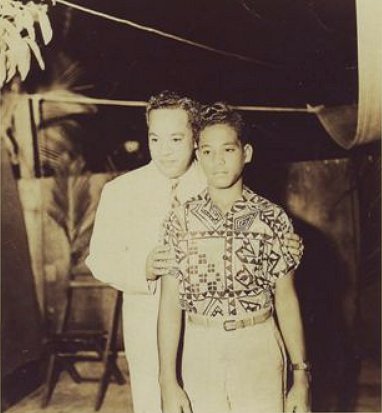 The article went to say: “Children are encouraged to keep in touch with their families by letter, and relatives are welcomed in visiting the institution. When homes are rehabilitated children are returned to them.” The young Samuel Lawrence Atcherley certainly got to see his father from time to time, as this photo of father and son (kindly supplied by Pattie Atcherley Hitchcock) shows.

Schooling was conducted at the orphanage. The Star-Bulletin report above noted: “Sixty-nine children are attending school, three teachers supervising their education to the completion of the sixth grade. When any special talent is displayed, every opportunity is given to develop it.”

Sam not only received an education at Kalihi, but also healthcare. This again from the Star-Bulletin report of 1930:

The health program is under the direction of a graduate nurse with the Columbus Welfare Association. Each child receives a complete physical examination before being admitted to the institution. The board of health also examines the children and administers necessary immunizing serums. Dental care and follow up treatments are given at Palama Settlement, also supported by the United Welfare.

Annual check-ups were also provided for the children, and in February 1944 a clinic was opened at the orphanage. The new clinic was accompanied by “a new cooperative plan for [the] health and social welfare, worked out by the Catholic Charities of the Diocese of Honolulu.” The Institution’s Sacred Hearts Sisters were to be assisted by the Franciscan Sisters (providing  medical care through the St Francis Hospital), and the Maryknoll Sisters (delivering social case work services to the children and their families).

Christmas, as we have already seen, was the highlight of the year for the Kalihi ‘orphans’. Appeals for gifts and funds were made each year to make sure the children had a Christmas party and received Yuletide goodies. In 1940, under the headline “Santa Will Visit Kalihi Orphanage Sunday Afternoon”, the Honolulu Star-Bulletin reported: “For 20 years this has been one of the major projects of the Catholic Women’s Aid society’s extensive Christmas program.”

The Holidays of 1941 were of course not so festive for Samuel Atcherley and the other boys who had trekked up into the mountains to view the destruction of Pearl Harbour. During 1942 he may have been one of the boys brought back “big bunches of bananas from their Victory gardens. Hopefully, Sam was off Santa’s naughty list that year and received what he wanted on Christmas Eve. One gift which stuck in Sam’s memory was probably the most valuable one he received before leaving Kalihi Orphanage: a Schwinn bike, which he used for his “career as a newspaper boy”!

Sam completed his education at Kaneohe, a coastal town on the other side of the mountains behind Honolulu. There, while at Benjamin Parker School, he was a member of the school football team, known as the ‘Cliff Dwellers’. The earliest reference to this which I have found so far dates from October 1949, when the “power packed Waialee Warrior grid machine crushed the Ben Parker Cliff Dwellers, 33-0”. Although this was a heavy defeat for Sam’s team, the report on the game ended with this paragraph of praise: “Playing brilliant ball on defense for the losers were Sammy Atcherley, Kenneth Fujisaka, Domingo Nazarro, Reuben Lum and Donald Kunimura.”

In September 1950, following an “Upset Win Over Farrington” (a “far superior” team), “Ben Parker’s Elwyn Hoapili almost single handedly garnered victory for the Cliff Dwellers”, but “other backfield stars like Joe Beranobis, Sam Atcherly and Stanley Lam performed effectively from a single wing formation.” Sam and two other pupils were to head a “powerful running attack” against the Leilehua Mules in October 1950; in the same month, anticipating a game between Ben Parker school and the Waipahu Marauders, it was reported that the team had “good running backs in Joe Beranobis, Stanley Lam and Samuel Atcherly.” In another match, against Koolau Boys’ Home the following month, Sam was again slated to play in the full-back position. His name also appeared in a report on the Cliff Dwellers’ 12-7 defeat of Kahuku later that November, in which he played an active part.

Sam continued to play football when he moved to Kaneohe’s James B Castle High School in 1951. He was one of five representatives of the school to be described as “outstanding” in a match which sadly ended in a 6-0 win for the opposition, Waialua, in September 1951. During an 18-0 defeat at the hands of Kahuku’s Red Raiders two months later in November, “Sam Atcherly of Castle punted to his 45” and further moves by his teammates led to the ball being put on the Raiders’ one-yard line and then rammed over, but the conversion failed.

Football was not the only extra-curricular activity that Sam got involved in at Castle High. He was a candidate for the king to accompany the May Queen during the school’s May Day festivities in 1951 (although unsuccessful, he was – with the others who had vied for ‘regal’ status and failed – made part of the ‘Royal Court’). On 2 May 1951, Sam was master of ceremonies for the school’s career day, when “Panels and discussions” were held. Sam also assisted with the ‘Castle Fun Fest’, held at the school on 2 and 3 May 1952. One of the student chairmen who worked with the teachers in charge, he took on jazz music and singing! 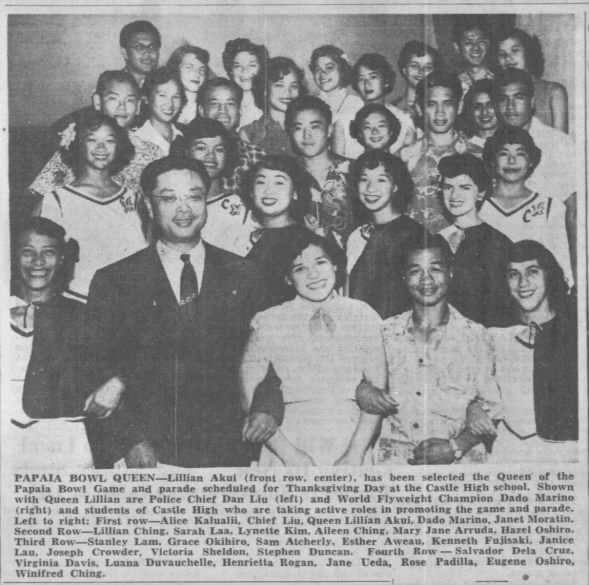 A photograph of Sam from his Castle High school days can be seen in the Honolulu Star-Bulletin of 21 November 1951. The star of the shot is “Queen of the Papaia Bowl Game and parade”, Lilliam Akui. But Sam is there, back in the third row.

Sam was part of the first class to graduate from Castle High, in June 1952. The graduation ceremony included speeches from five students on “the responsibility of the citizen today towards the home, the school, the community, the country and the world.”

What would Samuel Lawrence Atcherley Junior do to serve his community and his country? He started out by enlisting with the US Army, on 24 June 1952.

An appeal: If you have photographs, memories or information about Sam’s adult life which you would be prepared to share with me for possible use in a follow-up story about Sam, do please get in touch! Additional information or corrections relating to the above article would also be welcome. Steve.

Picture credits. Attack on Pearl Harbor, 1941: Adapted from an image held by the National Archives and Records Administration, National Archives Identifier (NAID) 295980, no restrictions on use. Samuel Lawrence Atcherley, Senior and Junior: Photo provided by, and used with the kind permission of, Patricia Atcherley Hitchcock. American football game, 1950 (sadly in Florida rather than Hawaii): Adapted from a public domain image taken from Wikimedia Commons. Papaia Bowl Queen and other Castle high school students: Shared from Newspapers.com.