Siblings Sarah and John Atcherley were the first of six children born to John Atcherley senior of Waters Upton, Shropshire, and his wife Elizabeth. They were also the only two of John and Elizabeth’s children who did not marry. Though they led separate and very different lives, ultimately they shared the same fate. Sarah Atcherley and her brother John both spent their last days in the Wellington Union Workhouse, dying there within a year of each other.

] was baptised at Waters Upton St Michael on 17 January 1809. As she does not (to my knowledge) appear in any other records until the census of 1841, the first thirty years or so of her journey to the workhouse are a mystery. Even the 1841 census record was not easy to find, as Sarah’s surname was written as Hatcherley and her age as 25!

The spelling of Sarah’s surname perhaps reflects the way it was pronounced (or heard). As for her age, Sarah was then 32 but she may (deliberately or otherwise) have misled her employer regarding her true age. She would only have needed to say that she was 29 to end up being listed as a 25-year-old. The instructions issued to census enumerators in 1841 stated that when copying information from householders’ schedules onto their own,

The census enumerators’ instructions for 1841 also stated, with regard to a person’s profession, trade or employment, that “Domestic Servants may be inserted as ‘Male Servant’ or ‘Female Servant’ without further statement of their duties.” So it was that Sarah was recorded as one of two female servants living at Child’s Ercall, in the household of farmers Elizabeth and William Woodhouse (who, from their ages, were likely mother and son), along with four agricultural labourers.

Sarah did not remain at Childs Ercall. By 1851 she was residing at Atcham in the household of another farmer, Edwin Cotterell, where she worked as one of two general servants. (Edwin also employed three agricultural labourers, and his sister worked as his housekeeper.) Although on this occasion Sarah’s name was written correctly, her age as recorded on the census schedule was still seven years adrift from reality. Any doubts that this might be another Sarah Atcherley are allayed by the fact that from the 1851 census onwards more specific birthplaces were asked for, and Sarah’s was said to be Waters Upton.

Downton Cottage, in Upton Magna, was Sarah Atcherley’s home by 1861. Living with 33-year-old cowman Thomas Chalenger, his wife and their three children, Sarah was described as a former dairy maid. We will probably never know how long she had been out of work at that point, nor how long it took her to find the dairy maid’s job she had in 1871. By that time she was once more part of a farming household, headed by George Hooper and his wife Emma, at Kinnersley. Her work would have involved not just milking the cows, but also making butter and cheese on the farm. It seems unlikely that she was chatted up by a character like “Doctor Syntax” in the illustration below, but the picture is probably not an entirely inaccurate representation of a farmer’s dairy chamber in the 1860s. 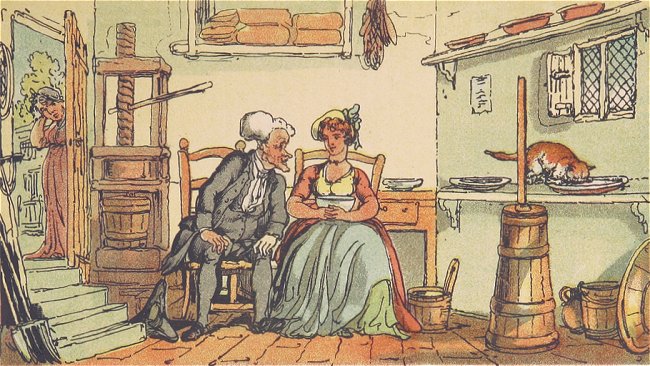 In both 1861 and 1871, Sarah had knocked six years off her age when the census enumerator came calling. At the end of her life however, in 1875, the official records of her age were closer to the mark. When her death was registered, and when her burial was recorded, Sarah was said to be 63 years old, which wasn’t too far from the truth (she was 66).

The burial register of Wellington All Saints also showed that Sarah’s interment took place on 19 June 1875, and that her abode had been the “Poor House”. Workhouse deaths, such as Sarah’s, were not uncommon. In 1870, the deaths of 5564 people were recorded by the registration districts lying wholly or mainly in Shropshire. 274 of those people (just under 5%) passed away in the county’s 17 workhouses.

Sarah might have lost her employment at Kinnersley and, with no means of supporting herself, had no choice but to apply to the Relieving Officer for the Wellington Union for admission to the workhouse, wherein she fell ill and died (Wellington and Kinnersley were two of the 11 parishes which made up the Union). Alternatively, Sarah may have succumbed to illness or debility for which she needed treatment; again, given her situation, the workhouse was probably her only option. Whatever the circumstances in which Sarah entered that institution, when she left it she almost certainly did so in the most basic of coffins, for a pauper’s funeral in a communal grave.

It seems likely that until she was finally laid to rest, Sarah Atcherley was regularly on the move, from one job to another and one parish to another. Census records only enable us to check on Sarah’s whereabouts on one day in every ten years, so we can only guess how many other Shropshire settlements Sarah lived in besides those we know about (shown on the map below). 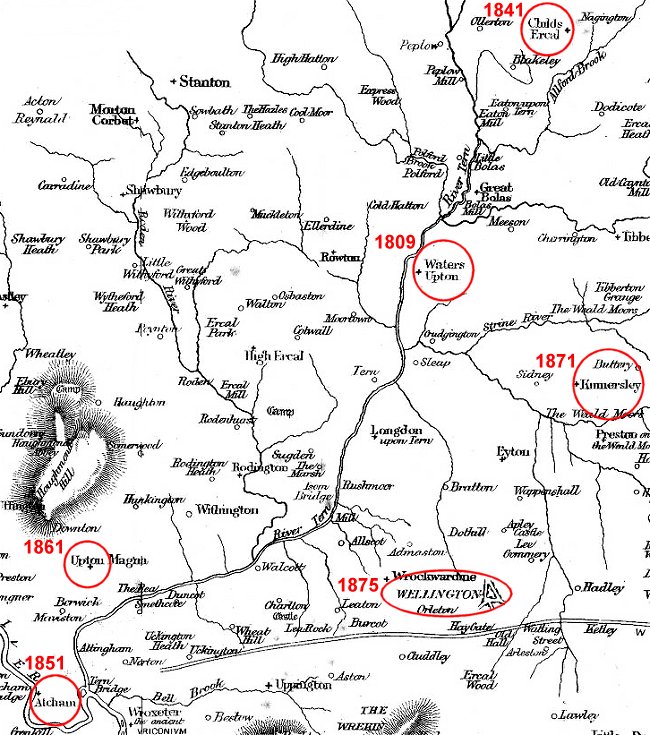 ]. While Sarah can be found in four different places on the four censuses which took place during her lifetime from 1841, for John the 1841 census is the first and last on which he appeared. Unlike Sarah, he had remained in the parish of Waters Upton, the parish in which he was most likely brought up, though possibly not the place where he was born.

John was baptised on 29 April 1810 at Priors Lee, a chapelry within the parish of Shifnal. The registers of Priors Lee were kept with those of the mother church, and the baptismal entry for John states that he was “born Apl. 5”. The abode of John’s family is not noted, leaving us to assume that they were at that time living in Priors Lee or close by, but that is not certain. Personally, I think it would have been odd for John to have been born there, when all of his siblings came into the world at Waters Upton – odd, but by no means impossible.

The 1841 census confirms that John was born in Shropshire. His age, like that of his sister, was recorded as being 25, whereas in truth he was rather older (31 to be precise). And we have an occupation for him: John Atcherley was a tailor. I imagine he made and repaired clothes for his fellow villagers.

I have searched for John on later censuses without success. Recently, I expanded my Waters Upton One Place Study and pored over the census schedules covering that parish from 1841 to 1911 to create abstracts. Still no sign of John after 1841. There is however some evidence to suggest that John remained in Waters Upton, or at the very least returned there for a while. He may have managed to evade the census enumerator, but did he escape service as a juror when a Coroner’s Inquisition was held at Waters Upton in the first quarter of 1865?

The Coroner’s Inquisition concerned the death of Andrew Lawley. He was most likely the Andrew Lawley who was born at Muckleton in the parish of Shawbury around 1834, and who by 1861 was lodging in Wolverhampton and working as a railway employee. His job may well have brought him back to the Waters Upton area, which became home to a number of men who worked at or from the railway station at Crudgington (just south of Waters Upton, but lying in the parish of High Ercall or Ercall Magna). Andrew was buried at High Ercall on 12 October 1864, the burial register showing that his abode was Crudgington and his age 29.

Of the ten jurors at the inquisition in 1865, five appear to have been Waters Upton residents at the time of the 1861 census: shoemaker Thomas Bennett, agricultural labourer Thomas Fletcher, tailor or agricultural labourer William Lloyd, innkeeper John Owen, and one of the two men named William Tudor (the one from Waters Upton was a wheelwright). Of the others, it appears that at least two were residents of Ercall Magna parish: William Humphreys (of Crudgington Green) and John Jenkinson (of Sleap). On this evidence I think it highly likely that the remaining three – including John Atcherley – were also resident in or near to Waters Upton. It is possible that the John Atcherley in question was the farmer living at Moortown (see Lunacy and an Atcherley), but if I were a betting man my money would be on John the tailor.

One thing we can be sure of is that John Atcherley, the tailor of Waters Upton who seems to have been quite determined to keep his name out of official records, could not maintain his anonymity at the end of  his life. When I purchased the death certificate for a mysterious John Atcherley whose passing was registered in 1874, I was surprised to find that he was the mysterious John Atcherley. The copy of his entry in the register of deaths (see extract below) showed that John, age given as 63 (close to the truth, he was 64), a tailor, had died at the Union Workhouse in Wellington on 31 July. The cause of death was certified as debility and exhaustion.

As John ended up in the Wellington Union Workhouse we can assume that he, like his sister Sarah, had previously been living in one of that Union’s 11 constituent parishes. Those parishes were, in addition to Wellington itself and the above-mentioned Kinnersley, Bolas Magna (or Great Bolas), Ercall Magna (or High Ercall), Eyton on the Wild Moors, Longdon upon Tern, Preston on the Wild Moors, Rodington, Wombridge, Wrockwardine – and Waters Upton.

A check of Shropshire Archives’ copies of the Wellington All Saints burial registers confirmed that John Atcherley was buried at that church on 3 August 1874. It seems likely to me that his final resting place was the same communal paupers’ grave in which Sarah Atcherley was interred the following year: brother and sister reunited at the end of their separate journeys from Waters Upton to the Workhouse.