Miss Ethel Atcherley was one of the most gifted of the brilliant circle of Manchester artists. She studied painting and modelling at the School of Art, in London and in Paris. She was a frequent exhibitor at the Paris Salon, at the New Gallery …

– Womanhood: the Magazine of Woman’s Progress and Interests.

], second daughter and fourth child of grocer Roger Atcherley and his wife Mary Ann (nee Heath), was born on 30 January 1864 at Eccles in Lancashire. She was baptised there on 13 March the same year. In 1871, ’81 and ’91 Ethel was living with her family at Wheatland, 5 Victoria Crescent in Eccles, but she is missing from the 1901 census. On 25 October 1905 at the age of 41 Ethel, a landscape painter, died in the Shropshire parish of Church Stretton, where she was buried three days later.

This picture of Ethel’s life, drawn as it is solely from parish, birth, death and census records, is rather basic and does not do justice to its subject. However, if we add other sources of information to our palette – particularly local newspaper reports – we can paint a richer and more vivid portrait of Ethel Atcherley.

Ethel’s artistic interests extended beyond her use of oils and watercolours, at least in her earlier years. One of the first appearances of her name in print, dating from 1880, is in a list of students granted certificates in Local Examinations in Elementary Musical Knowledge. Ethel Atcherley of Eccles was awarded Second Class Honours in the Senior Division.

A decision – music or painting – had to be made, and it was painting (along with sculpting or modelling) rather than music that Ethel pursued academically. She did so as a student of the Manchester School of Art, where she studied under a Mr Willis. She was probably there from at least 1885, being amongst the winners at the school’s Sketching Club Prize Distribution which took place on 13 January 1886. On that occasion the club’s vice-president, Mr. T. Worthington, F.R.I.B.A., and Robert Crozier, president of the Manchester Academy, both urged members of the Sketching Club “to use untiring effort in developing their talent and sustaining the prestige of the institution with which they were connected.”

Ethel certainly seems to have taken the advice of Messrs. Worthington and Crozier to heart. In 1891 her sculpture Reduced Copy of ‘The Slave’ by Michelangelo was exhibited at Manchester Art Gallery’s First Exhibition of Arts and Crafts. The following year she was presented with prizes of £3 for an oil painting, and of £1 for a “modelled head from life.”

After completing her studies at the Manchester School of Art, Ethel studied in Paris under Messrs. Raphael Collin and Girodat. She then returned to England, where her work began to attract comments in the local press. In one of the earliest such mentions, in 1895, the author stated that “Ethel Atcherley may be seen to advantage in a bright drawing of a scene on the Anglesey Coast.” The painting referred to may have been Ethel’s Anglesea Village which was exhibited at The Royal Academy of Arts that year. Later in 1895 her painting The Silent Hours of Love was sold at the Autumn Art Exhibition in Manchester for £31. 10s.

A picture is said to be worth a thousand words. I am therefore very grateful to Martin Atcherley for providing me with a photograph of Ethel’s painting Warkworth Castle and allowing me to share it here.

There are also two examples of Ethel’s work online to which I can link: Wild Roses by a Stream, and The Sculptors Studio. These images provide such a small sample of Ethel Atcherley’s paintings that I can’t resist adding, if not a thousand words, then certainly a few hundred, from the columns of the Manchester papers. I hope (as no doubt the original authors hoped) they will provide the reader with a feel for the quality and range of Ethel’s work:

Miss Ethel Atcherley is an artist of whose work we have spoken in these columns in terms of praise. In the present exhibition she is represented by one of the best drawings in the collection. (No. 54) The Monnow Bridge, Monmouth, is a large and important work, and represents a mediaeval piece of fortification, with truth and great strength. The colour is admirable throughout, and the focus of light on the old town gateway is a happy artistic inspiration. … Miss Atcherley has got the true grip on water-colour art, and this fine drawing is worthy of all praise.

Miss Atcherley’s Exhibition of Watercolours.—At Messrs. Grundy and Smith’s galleries in Exchange-street, Manchester, Miss Atcherley is exhibiting 68 examples of her work as an artist in watercolours. During the summer of this year she stayed at St. Monans, a quaint fishing village in Fifeshire, and as a consequence there is a strong Scottish flavour about many of her pictures and studies. One of the largest of her works, The Harbour of St. Monans, is an interesting nocturne. Deepening twilight gathers around the cottages of the fisherfolk, and the lights from within them are cleverly reflected upon the water and the boats in the harbour with almost weird effect. A few figures flit through the growing darkness, and altogether the composition conveys a poetic sensation of the close of a quiet day in a spot where there is more of the hush than of the rush of life. A Sunny Morning at St. Monans, St. Monans on a Showery Day, and St. Monans from the East, are other Fife subjects, having more daylight in them, and are smaller than the one just referred to. Their mention serves to indicate one direction of Miss Atcherley’s industry in a locality whose charms she has striven artistically and with success to convey. They are only a few of her gleanings from the North. On this side the border she has exercised her vocation in parts of the country far and near. Richmond, a large drawing, in which the lower part of the hill is enveloped in a bluish haze, A Berkshire Home, The Wye at Monmouth, Warkworth Bridge, The Farne Islands, North Hill, Clovelly, On the Kennett and Old Cottages, Warwick, are a sufficient number of titles of her pictures to name in order to show that she has laboured over a wide area in her studio from Nature. Of the interiors which she shews three are specially interesting in this part of Lancashire, namely, Eccles Old Church,Manchester Cathedral, and Chetham’s College, the last-named being the most commendable of the trio.

Prominent amongst the watercolours was The Harbour, by Miss Ethel Atcherley, representing that mysterious hour of the gloaming, half-day, half-night. A rising sea-mist slowly envelopes a row of fisher cottages on a quayside. As the lamps are lighted their reflections quiver in the calm waters of the harbour. There is a refreshing breadth and an absence of trickery in Miss Atcherley’s work.

– The Art Record: A Monthly Illustrated Review of the Arts and Crafts, April 1902.

Where all are so good it is difficult to single out examples as illustrations of this, but we are bound to draw attention to Mr. Cyril Ward’s grand Welsh landscape (No. 91), and to Miss Ethel Atcherley’s Sweep of Scythe in Morning Dew. These two examples are totally different in subject and treatment; yet they are equally strong in manipulative power and fine colour scheme. Miss Atcherley has achieved a great triumph in the sweeping attitudes of her mowers. They are most powerfully drawn, and moreover, they take most interesting colour from the atmosphere of the ‘dewy morn.’ … These two drawings may be ranked amongst the strongest works in water-colour …

Finally, one of the last reviews of Ethel Atcherley’s work, printed in or just before the year of her death:

Nowhere are women more strenuous in social work, in art and literature and music, than in Manchester. At the City Academy of Art we find them taking foremost places in the Exhibition. Miss Ethel Atcherley’s Summer Noon and her Quiet Coloured Eve, are delightful examples of her style.

After Ethel’s father Roger retired from the grocery trade the Atcherleys moved from Eccles to Roger’s native Shropshire, in the autumn of 1904. The family lived at All Stretton Hall, which is where Ethel passed away, a week and a half after being taken ill. Among the floral tributes at her funeral was a wreath sent on behalf of the Manchester Academy of Fine Arts. Administration of Ethel’s effects, valued at £1,921 10s., was granted to her father. 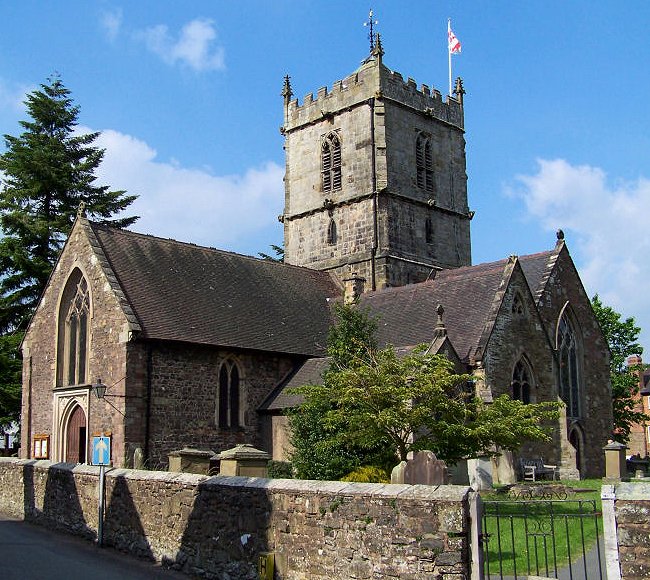 From historic newspapers we can glean not only facts about Ethel Atcherley’s life and work, but also something of her character and how she was seen by others. An obituary printed in the Manchester Courier and Lancashire General Advertiser included the following tribute to Ethel:

For many years past she has been one of the most noted and effective contributors to the Manchester Academy’s Annual Spring Exhibitions, her exhibits being in every way a strong reflex of her honest, loveable, and loyal disposition—powerful, open, direct and free from show in every respect. One who knew her well writes: ‘In all her dealings one always found her fearless and just. But, above all, she had sympathy and consideration for other people’s feelings and rights.’ She was a valued and valuable member of the Council of the Manchester Academy, respected by all who were fortunate enough to have the advantage of her acquaintance.

In 1908, three years after Ethel Atcherley’s death, one her paintings (The End of an Autumn Day) was presented to the Manchester City Art Gallery by her mother, where it remains to this day as an reminder of one of city’s most talented young artists.