On 27 August 1816, an Anglo-Dutch fleet in the Mediterranean approached the north African city of Algiers. The fleet’s mission was to secure the release of Christian slaves, and put a stop to the Algerian practice of enslaving Europeans. A shot fired by an Algerine gun triggered the planned bombardment of the city, its defences, and the ships in its harbour. During this attack Midshipman Aaron Stark Symes, commanding rocket boat number 8, was “led by his ardent spirit” to defy orders and set off in support of a barge which was tasked with setting fire to an Algerine frigate. Of the 17 men aboard the rocket ship, three were killed and 11 – including Aaron – were injured. Aaron’s conduct merited an official mention for his gallantry, and earned him a Lieutenant’s commission. 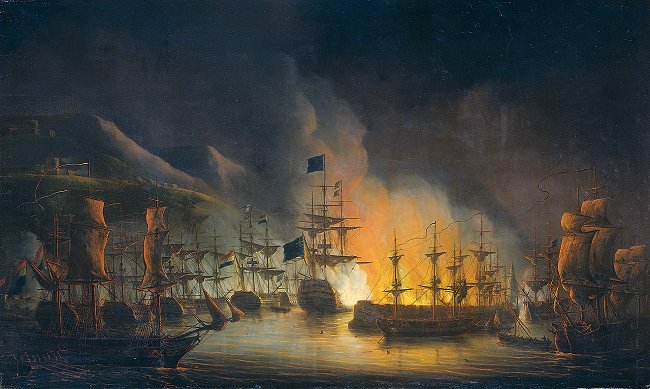 ] in 1857, was born on 17 September 1792 at Combe St Nicholas in Somerset. Aaron’s birth was recorded at the Baptist Church in nearby Chard; his parents were named in the register as Jonathan Wyatt Symes and Anna. Jonathan was a tobacco manufacturer, as were members of the Cary family of Martock into which he had married. Documents held by the Somerset Heritage Centre also indicate links with a Jonathan Wyatt (yeoman of Chardstock) and Martha Stark (the widowed sister of James Wyatt). These relationships probably explain the forenames of Jonathan Wyatt Symes – and of Aaron Stark Symes.

Aaron joined the Royal Navy on 7 December 1808, as a First Class Volunteer. He served in that capacity, and later as Midshipman and Acting Master, aboard the sloop Pheasant (18 guns). His service with that vessel took in the Channel, West India and Newfoundland stations. According to A Naval Biographical Dictionary, Aaron “contributed during that period to the capture of several armed American vessels, and was often intrusted with the charge of a prize.”

After passing his naval examination on 5 April 1815, Aaron was nominated on 11 May 1816 for the position of Admiralty-Midshipman of the Hebrus (36 guns), under Captain Edmund Palmer. It was while serving on this ship that Aaron took part in the bombardment of Algiers. The attack was a partial success, in that the Dey of Algiers freed over 3,000 slaves. However, although the Dey signed a treaty which forbade the future enslavement of European slaves, the slave trade continued.

This partial success cost the British navy over 800 casualties: 128 men were killed and 690 wounded. Aaron himself “had his lower jaw fractured, and part of his tongue carried away, by a musket-ball; and, in addition to several contusions, he received a painful wound in the right hand.” In respect of these wounds, Aaron received a grant from the Patriotic Fund, and – thanks to a special exception being made in his favour by the Admiralty – an annual pension of £91 5s.

I have not been able to confirm Aaron Stark Symes’s movements in the immediate aftermath of the action he saw at Algiers. No doubt he spent some time recovering from his wounds, but then what? The Naval Biographical Dictionary suggests that he “appears to have commanded a ship of his own in the Mediterranean, South America, and the North Sea”, but I have found no evidence which would corroborate this. Instead, it seems, Aaron settled on the island of Guernsey, where he lived on his pension (and probably also on half-pay) from the Navy  – and married his first wife, Sarah Jefferys [

As we will see in due course, Aaron’s marriage to Sarah was as crucial to the Atcherley-Symes story as his later wedding to Elizabeth Atcherley Holt. It is said that Aaron and Sarah had eight children – five boys and three girls. I suspect that not all of them lived beyond childhood. We will catch up with one of the surviving offspring later.

With a family to support, Aaron Stark Symes supplemented his income by entering into business. A biography of master mariner Nicholas Le Messurier noted that Nicholas joined the crew of the Reward, which belonged to Messrs Sheppard, Symes and Co of Guernsey, in March 1822. Then:

On 25 March 1827, Messrs Hannibal Sheppard, Aaron Stark Symes, and Hillary Evans Jeffreys bought a brig on the stocks from Mr John Vaudin and young Le Messurier was selected to see that the vessel was properly rigged and appointed. She was launched on 11 May 1827 and, much beyond his expectations, the young sailor was appointed master. The vessel was named the Flora, 158 tons […]

An “Alphabetical List Of Ships, Brigs, Schooners, and Sloops or Cutters, belonging to Guernsey, in employ for the year 1827” confirms that N. Le Mesurier was Master of 169 ton brig Flora, but states that the owners were A. S. Symes and Co. Hannibal Sheppard appears to have had his own, separate business, Sheppard and Co., which also appeared in the list of 1827. 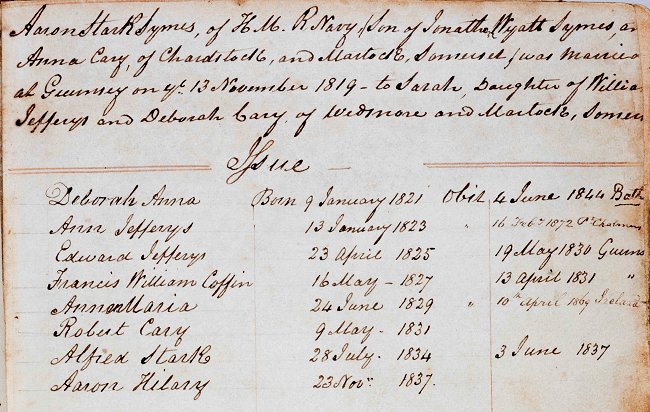 When the census of 1841 was taken, Aaron and his family were enumerated at “Charottrie” (Charroterie), a street in St Peter Port, Guernsey. With Aaron Symes (age 48, Navy Half Pay) were Sarah (age 39) and children Deborah (20), Ann (18), Anna (12), Robert (10), and Aaron junior (4), plus two female servants. Aaron’s birthplace was shown as England, while his wife and children (listed – along with those who died young – in the family bible, an extract from which is shown above) were all born on Guernsey. It looks like the Symes family had been living on the island continuously for more than 20 years – a situation which was soon to change.

The New Navy List of August 1843 had no entry under ‘Present Employment’ (in the Royal Navy) for Lieutenant “Aar. S. Symes”. Within two years however, Aaron was appointed (on 21 May 1845) to Her Majesty’s Steam-packet Redwing. This vessel, a 60-horsepower steamship on Post Office service, was based at Liverpool under the command of Thomas Bevis.

The revival of Aaron’s active Naval service next brought him a promotion to Lieutenant-Commander (from 19 June 1846) and the command of his own steam-packet, the 240-horsepower Urgent, also based at Liverpool. Appropriately enough, it was during his service on this vessel that Lieutenant-Commander Aaron Stark Symes attended to two urgent cases of distress.

One of these was the famine which afflicted Ireland in the second half of the 1840s. This was a humanitarian disaster on an enormous scale, the impact of which was made worse by the way in which the British government of the time handled the crisis. This is not to say that food aid was not provided – it was, and Aaron Stark Symes played a part in that operation. 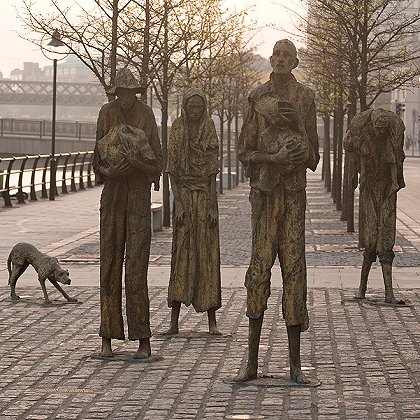 On 30 January 1847, the Hampshire Chronicle gave an account of some of the British ships involved in the relief effort, with details of where and how they were assisting. It stated that “The Zephyr, Lieutenant-Commander Ladd, one of the Holyhead steam-packets, and the Urgent, Liverpool mail packet, Lieutenant Commander Symes, have been ordered to be employed in conveying provisions; the former has already arrived at Cork.”

In a similar report, The Freeman’s Journal of Dublin noted on 27 March 1847 that “The Urgent, Liverpool mail steam packet, Lieutenant Commander Symes, when the Tyne has discharged her cargo, is to tow her to the southward of Cape Clear.” The Tyne, a frigate, had arrived at Tarbert on the 17th and after unloading was to head for Devonport to pick up further supplies.

Another Irish newspaper, the Northern Standard, informed its readers on 7 April 1847 that:

By a letter from Cork, dated 5th April, we learn that several vessels were held in readiness at that port and on the coast of Ireland, to receive seed on the arrival of the Terrible, Odin, Avenger, steam frigates, and Portland, 50 gun frigate and distribute it at the various points. […] The Urgent, steam packet, Lieut. Commander Symes was at Cork, readiness for transferring seed corn from the vessels expected from Portsmouth to the distressed points of the coast.

In all, 50 naval vessels – from men-of-war to lighters – were engaged in relief operations on the coasts of Ireland and Western Scotland. Some were more involved than others. According to The Nautical Magazine and Naval Chronicle of February 1848:

Of the 50 government vessels enumerated, the meal and bread stuffs carried and distributed by each varied from 3,200 tons to 59, and from 80 trips of distribution to one. The work, risk and labour, fell upon the small and not largely powered steam vessels, with crews from 30 to 70, […] the task of relief fell upon the Blazer, Comet, Lucifer, Dasher, Zephyr, and the small sailing craft, to put to sea in all weathers for the distressed and suffering parts of Cork, Kerry, Galway, &c.

At the beginning of 1848, the Treasury “awarded the sum of £8,600 to be distributed as gratuities to certain officers, men, and boys employed, as compensation for their extra expenses, and for the wear and tear of the clothing of the men and boys.” Although it was not amongst the ships which saw “the most severe duty”, “the Urgent, steam packet, Lieut.-Com. Symes” was one of a number of ships which received an award “for the working men, to be equally distributed, share and share alike”. In the case of the Urgent, that award was £30.

The report in The Nautical Magazine and Naval Chronicle concluded that it was “truly remarkable, that during the eighteen months famine, and the presence of 40 men-of-war on the coasts, no accident or mishap occurred, while to the foreign and coasting trade, the shipwrecks were many and disastrous.”

One of the ships which met with disaster on the Irish coast in 1847, the Rochester, was taking Irish emigrants to America. Fortunately, help was at hand and the stricken vessel received Lieutenant-Commander Aaron Stark Symes’s Urgent attention.