We regret to have to announce here the wreck, on the Blackwater Sands, county Wexford, of the Rochester, Capt. [Truman], on her way with passengers for New York. She was a fine vessel, 850 tons register, and chartered by Messrs. Grimshaw and Co., of Liverpool, from which town she sailed on Sunday last, and in 36 hours after she struck, as stated, on the coast of Wexford. The crew and 47 of the passengers were brought to Cove on Thursday, by Lieutenant Symes, R.N. [

], commander of her Majesty’s ship Urgent. The remainder of the passengers, upwards of 200 in number, were landed by the fishing boats and conveyed to the town of Wexford. — Dublin Evening Mail, 21 April 1847. 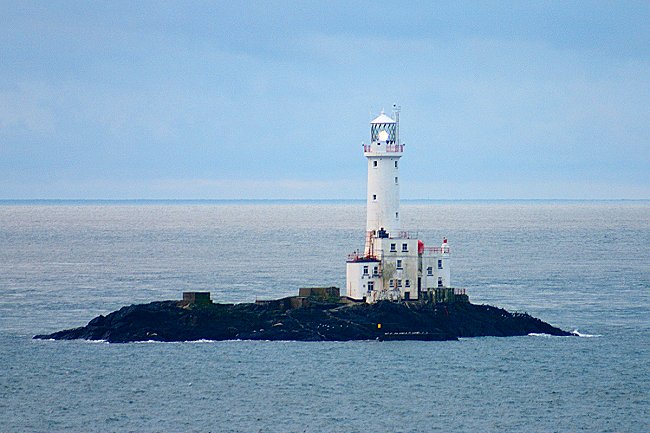 “It is supposed that the mistaking of the Tuskar Light was the cause of the misfortune.”

The wreck of the Rochester took place during a time of mass emigration from Ireland, a desperate diaspora sparked by a catastrophic famine. Many thousands of people sailed across the Irish Sea to Liverpool, where some remained while others set off for other parts of England, or embarked on voyages across the Atlantic. Giving evidence on the subject before the Select Committee on Settlement and Poor Removal in 1847, Edward Rushton (stipendiary magistrate of Liverpool) stated:

The influx of Irish into Liverpool became day by day so much increased that on the 13th of January, 1847, I ordered the officers to be stationed when the boats arrived from Ireland, to count the number of poor people who came; and from the 13th of January to the 19th of April inclusive, there had arrived in Liverpool 131,402 poor persons, many of them shockingly debilitated, all of them in a most distressful condition, and some of them diseased. The emigration from the port during this period amounts to 43,46, nearly all Irish; nineteen twentieths, certainly; so there remain in Liverpool and the adjacent country a balance of about 90,000.

Newspaper reports indicated that the passengers aboard the Rochester, an American ship, were emigrants, who appeared to be “principally from the north of Ireland.” Their perilous voyage to New York was cut short by the shipwreck, but all passengers and crew all survived thanks to four fishing boats (which “took each as many of the steerage passengers as they dared to carry”) and the steam-packet commanded by Aaron Stark Symes. Howland Holmes, a surgeon who was among the last to leave the stricken ship, stated that when the Urgent approached “It was our last, our only hope, and nearly every eye was now moistened with tears of joy.”

Copies of letters exchanged on 15 April 1847 between some of those rescued, and their rescuer, were published in the Liverpool Mail. The first was addressed to Lieutenant A. S. Symes, R.N., commander of her Majesty’s ship Urgent:

Sir,—Allow us to tender our sincere and heartfelt thanks for the great service you rendered in taking us from the wreck of the ship Rochester, when in a position of extreme peril on the Blackwater Bank, on the morning of the 14th inst., having had a flag of distress hoisted from the afternoon of the previous day. Several sailing vessels and three steamers passed—one of the latter we supposed to be the Ocean—without taking any notice of our position, when your able assistance was the means, under God, of saving our lives and property, and also for the extreme courtesy and attention with which you received us, and attended to our every want when on board her Majesty’s ship Urgent.
At the same time we wish to convey to the officers and crew, under your command, out thanks for the able and efficient manner in which they performed the dangerous duty you assigned them.
And, Sir, we beg to assure you, that your kindness and attention will not be forgotten […] 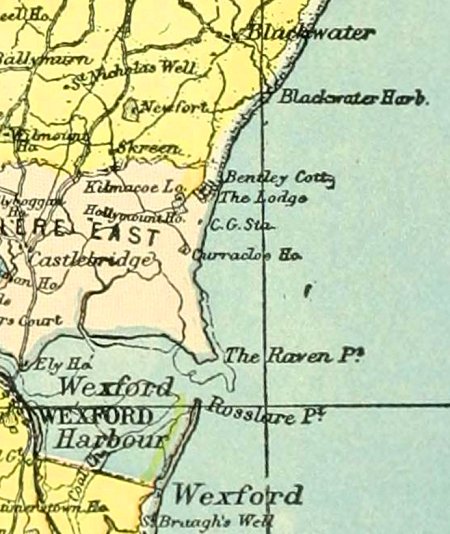 The names appearing at the bottom of the above letter included those of the Rochester’s Captain (Daniel Henry Truman), its First Officer, surgeon Howland Holmes and other cabin passengers; in addition there were “Thirty-seven passengers and twenty sailors also removed by the Urgent.”

The rescuer’s reply was both modest and revealing, showing that the Rochester was not the only vessel to which the Urgent had provided assistance:

Gentlemen,—I have the honour to receive your letter, of this day, conveying, in very gratifying terms, your approbation of the services of the officers and crew of her Majesty’s ship Urgent, under my command, for assistance rendered in removing you from the wreck of the American ship Rochester, stranded on the Blackwater Bank on Tuesday last. I beg to assure you that it has afforded us great pleasure in having, through Divine Providence, been placed in a position to be of assistance to you on this melancholy occasion; the alacrity of my officers and ship’s company, in the performance of their duty to you yesterday, as to others recently, on a similar occasion, is a sufficient proof of their readiness, at all times, when called upon, to relive the distresses of their fellow creatures.
You have our united best wishes that every blessing may attend you here and hereafter.—l have the honour be, gentlemen, yours, &c.,
A. S. Symes,
Lieut., Commanding H.M.S. Urgent.

What then became of the would-be emigrants? Their immediate fate, according to Edward Rushton’s evidence before the Select Committee on Settlement and Poor Removal, was as follows:

These poor people were taken to the town of Wexford. The captain of the Rochester, who is, I understand, part owner of the ship, and who would be looked to for a return of the passage-money, was on the spot, yet notwithstanding this, the Mayor of Wexford put all these destitute persons on board a steamer, and sent them consigned to the Mayor of Liverpool, as he said, to obtain justice and charity in Liverpool.

After the emigrants’ return to Liverpool, passenger agent George Saul “settled with some of them by sending them out in the Patrick Henry, and others, through sheer want, [went] back to Ireland.” The Patrick Henry was by all accounts a fine ship; it is possible that its voyage from Liverpool on 23 June 1847, arriving at New York on 27 July, was the one offered to the emigrants from the Rochester who pursued their plans to settle in the USA.

1847 saw Aaron Stark Symes praised for his role as saviour of passengers and crew left stranded on the Rochester – but also taken to court for his alleged negligence back on 31 December 1846, when the Urgent collided with the steam vessel Tynwald. It seems that conditions were foggy when the accident happened, but there was a question as to whether or not the “improper speed” of the Urgent was to blame. Ultimately the jury found for the plaintiffs, awarding damages of £3,000, and 40 shillings costs (both of which sums were borne by the Admiralty). As we will soon see, this was not the only accident to take place involving a vessel under Aaron’s command.

In March 1848 the following naval appointment was announced: “Lieutenant A. S. Symes (1816), late in command of the Urgent packet, to command the St. Columba steam-packet, at Liverpool.” The St Columba was a new vessel, commissioned on 5 January 1848, so it appears that despite the accident which took place at the end of 1846, the Royal Navy still had confidence in Aaron’s abilities as a commander.

By the beginning of 1850, the St Columba was stationed at Holyhead on Anglesey. On 1 December that year, for reasons which I have not been able to establish, Aaron Stark Symes was commanding the Eblana steamer, belonging to the City of Dublin Steam-Packet Company. As this steam-packet came in to Holyhead, in darkness, and with little time to spare to offload the mail for its onward journey by rail, the gangway was opened before the pier was reached. This was apparently common practice in such circumstances; the only measure taken to protect passengers was that the open gangway was attended by a member of the crew (in this case, the Eblana’s carpenter). Unfortunately, a passenger by the name of William Septimus Saunders approached the gangway and fell into the sea. By the time he had been picked up and taken ashore, he had breathed his last.

At the inquest into the death of Mr Saunders, the jury’s verdict jury was “that the deceased came to his death accidentally” in the circumstances which I have outlined above. To this verdict a note was added:

The jury conceive it is not safe for the passengers travelling with the mail boats from Kingstown to Holyhead that such a system should be any longer tolerated that some better system of vigilance be adopted and that although it was the duty of the carpenter, Morgan Redcliffe, to attend to the gangway of the Eblana steamer when the accident occurred, still that there was no culpable negligence on his part.

The North Wales Chronicle concluded its coverage of the inquest thus: “It is a melancholy matter, and might, perhaps, have been avoided by the exercise of a little more apprehension on both sides.”

Aaron Stark Symes continued to serve as Commander of the St Columba, from Holyhead, until the beginning of 1857. On 6 February that year, he was one of several Lieutenants appointed by the Admiralty to be a Commander “on the reserved half pay”. It appears to me that this was, in all but name, retirement – in which case Aaron and his wife Sarah [

] would no doubt have looked forward to spending more time together in the years left to them. Tragically, this was not to be. The North Wales Chronicle of 28 February 1857 included the following in its Family Notices section:

On the 23rd inst. very suddenly, after a severe attack of erysipelas of the brain, Sarah, the beloved wife of Commander Symes, R.N., Plas-hyfryd, Holyhead, in her 56th year. Her sudden death has caused great grief amongst a large circle of her friends.

Picture credits. Tuskar Rock lighthouse: Adapted from a public domain photo by Andrewmc; sourced from Wikimedia Commons. Map of coast near Wexford: Taken from a map published in Atlas and Cyclopedia of Ireland, Part I, copyright expired; sourced from Internet Archive. Holyhead: Adapted from a public domain image uploaded to Wikimedia Commons by the National Library of Wales.