During my quest for records relating to members of the Atcherley family, I have found many variations in the spelling of their surname (see Lost in transcription for some examples). Sometimes I find Atcherleys recorded under other family names, including Ackerley, Atherley and Ashley. It works the other way too: from time to time I find an “Atcherley” who – through no fault of their own – turns out to be an imposter!

A longstanding puzzle, which I have only recently investigated and solved, has been the identity of the Thomas Atcherley, a labourer, and his wife Ann, both of Crudgington Green, whose son Robert was baptised at St Michael & All Angels, High Ercall, on 21 January 1849. There was certainly a Thomas Atcherley living in the parish at that time. He was then aged about 30, having been born to John and Elizabeth Atcherley at neighbouring Waters Upton around 1819 (but never baptised as far as I know), and he was a labourer. He was however a bachelor. This situation changed a little later in 1849 (on 4 May to be precise) when he married Jane Hussey at St Catherine’s church in Jane’s home parish of Eyton. The couple’s second son, named Robert, was born in the nearby town of Wellington in 1851. But was Thomas also the father of the Robert Atcherley whose baptism was recorded at High Ercall in 1849? It seemed unlikely to me that he would have fathered a child with a woman named Ann so soon before his wedding to Jane. But not impossible….

Extract from GRO copy of marriage register entry for Thomas Atcherley and Jane Hussey.
Click on the image to view a larger version at Flickr.

I have found no further references in the records to a Robert Atcherley born in 1849 at Crudgington Green, High Ercall. However, a search of birth registrations in the district of Wellington, Shropshire in 1848 and 1849 for children named Robert (carried out at FreeBMD) revealed one for a Robert Ashley in the first quarter of the latter year. Searching the 1851 census for a two year old Robert Ashley in Shropshire finds him living with his older brothers William, Samuel and Thomas in the home of their grandfather, widower William Ashley, at Crudgington, along with the boys’ parents: Thomas Ashley, an agricultural labourer, and Ann. A perfect fit. It would appear that the Reverend Forester, who performed Robert’s baptism, interpreted Ashley as another surname which was very familiar in the parish of High Ercall, that of Atcherley. Case closed, methinks.

Caroline Atcherley and her daughter Elizabeth

The registers of Little Drayton covering the year 1852 tell the short and sad story of Elizabeth Atcherley. She was baptised on 24 November, her mother named as Caroline Atcherley, and her abode: Little Drayton Workhouse. Five days later she appeared in the burial register.

So who was Caroline Atcherley? The only person of that name known to me was born in Newton Abbot, Devon and baptised at Wolborough parish church on 10 October 1814; she died, unmarried, in 1898. Although Caroline spent most of her life in Devon, the census of 1881 found her staying with evangelist John Connor and his wife in Edgmond, Shropshire. She was a member of one of the wealthier Atcherley families and while we can never rule such things out, the chances that she would have turned up at a Shropshire workhouse to have a child out of wedlock at the age of 38 seem remote.

What if the other Caroline Atcherley – probably not an Atcherley at all – had married some time after the birth and death of her illegitimate child? I decided to switch from the baptisms and burials to the Shropshire marriages at Findmypast and to search for the nuptials of Caroline (with no surname) in the period five years either side of 1857 (i.e. from 1852 to 1862). The results, by default, were sorted in alphabetical order by surname, and right at the top of the list was a Caroline Ackley marrying in 1854 at Cheswardine (which lies about six miles from Little Drayton). The marriage register of the parish church of St Swithun shows the wedding of Charles Simcock, bachelor of Cheswardine, son of Richard, and Caroline Ackley, spinster, of the same place, who named her father as Samuel Heywood, a farmer. Caroline – who had clearly been born out of wedlock herself – signed the register, while her husband, and witnesses William Bayley and Margaret Breeze, made their marks. 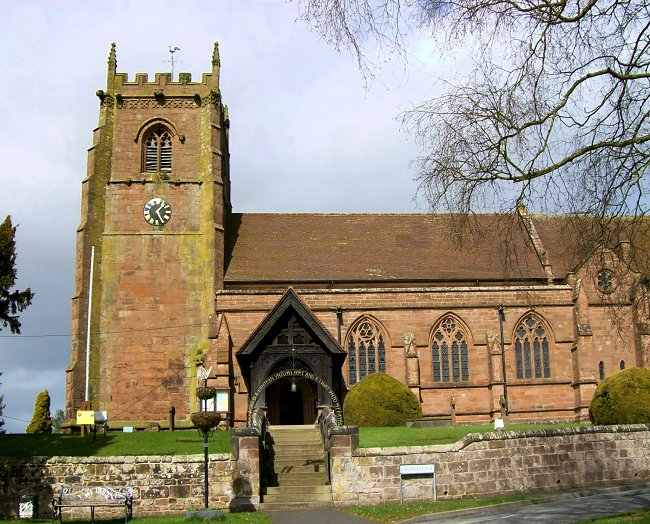 The church of St Swithun in Cheswardine, where Caroline “Ackley” was married in 1854.

Next, I hopped back in time a little, to 1851, and searched that year’s census for “Caroline” in the parish of Cheswardine. Result! Living in Moss Lane, Chipnall, in the household  of agricultural labourer William Bayley, his wife Elizabeth and their daughter Hannah, was a 21 year old house servant named as Caroline Hackley. ‘Next door’ (by which I mean, in the household enumerated immediately before that of the Bayley family) was widower William Breeze, his grown up children Elizabeth and William, and a lodger.  I have little doubt that Caroline Hackley of Chipnall in Cheswardine was the Caroline Ackley who married in that parish in 1854.

The 1851 census gives no birthplace for Caroline. However in later censuses, as the wife of Charles Simcock, she stated that she was born in Malpas, or nearby Threapwood, in Cheshire, the county where the surname Ackerley is most prevalent. Ackley and Hackley could well be corruptions of Ackerley, a surname which in turn might easily be heard as Atcherley in Shropshire. But, just as the registrar of births, marriages and deaths for Wellington district had sharper hearing than the vicar of High Ercall, so the registrar for Market Drayton district may have had better auditory abilities than the Rev. Edward Cheere at Little Drayton. Among the death registrations in that district for the last quarter of 1852 is one for an Elizabeth Ackerley. This, I believe, was the true name of little Elizabeth “Atcherley”.

Picture credits. Extract from GRO copy of entry in marriage register: by the author. St Swithun’s church at Cheswardine: modified from a photo at Wikimedia Commons by Tony Grist, made available under a Creative Commons Licence.