< Back to The Curate of Wednesbury and His Vicar – Part 1

] was now convinced that the overtures of friendship made by the Vicar who employed him, the Rev Alexander Bunn Haden, were a sham. John wrote: “He requests me to obtain as many signatures of the inhabitants to this petition as I possibly can. For what purpose? To bury it in oblivion! to get me removed, sacrifice the honour of his Bishop, and the reputation of his Curate. This is the Vicar of Wednesbury’s friendship; he certainly would neither have sent the petition, nor Miss Baylay’s letter to the Bishop; for his lordship was quite in the dark on the subject. No, he would have put them on the fire; the Bishop’s wrath would have remained unappeased, and I should have received a letter of condolence and commiseration, and a picture of Mr. Haden’s distressed mind at the thoughts of parting.” 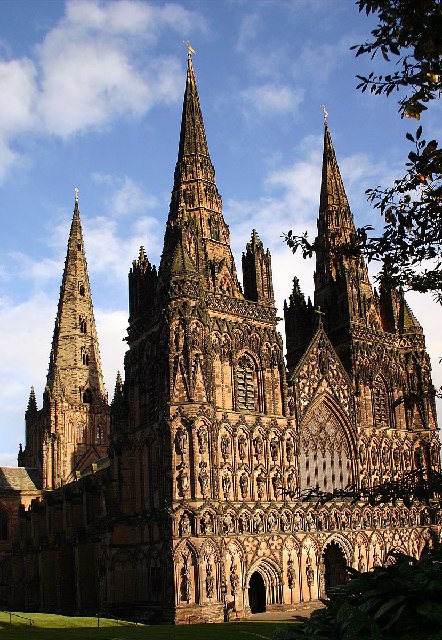 Lichfield Cathedral, at the heart of the Diocese of Lichfield

John wrote to the Rev Haden to make him aware that he (John) had received “a very pleasant letter from the Bishop”. The result was that Haden, who had seemed determined not to set foot in Wednesbury, finally did so, on 12 July 1805. He called upon John Atcherley, his Curate, and asked to see the Bishop’s letter. After reading it, he expressed the view that John had no business writing to the Bishop, and that the Bishop was very wrong in replying directly to John – the correspondence should have been sent via himself, the Vicar. This prompted the following verbal volleys between our clashing clergymen, as recalled by John Atcherley:

I replied, that I wrote to the Bishop myself, because you seemed not inclined to do it, and because you threw cold water upon my warmest hopes. Cold water, sir, replied Mr. Haden, you have plunged me in hot water, for all my kindness and trouble.—I have got my foot in it prettily now. I did not understand him; he explained, you have made me look ridiculous in the eyes of the Bishop, my particular friend. I should be sorry to sever friend from friend, said I; and if the Bishop is your particular friend, why did you not forward to him the evidence of my guilt or innocence, and request he would comply with the wishes of the parish, and suffer me to remain Curate of Wednesbury? for though indeed I may have plunged you in hot water, yet it was undesigned; but what have you done to me? Why, you have deliberately and intentionally scalded me to death …

This clerical conflict then returned to the matter of the petition: the Rev Haden maintained that Wednesbury’s parishioners wanted John Atcherley removed, and that it was for this reason that John had not been able to get the petition signed. John of course disagreed, and after Alexander Haden’s departure, he set out to prove his Vicar wrong. Rev Atcherley circulated a petition, of his own design, one which was to be sent directly to the Bishop:

On July the 16th, I delivered my petition to the inhabitants who eagerly received it, and joyfully signed it. It is as follows, and signed by 500 inhabitants:

WE whose names are hereunto subscribed, unbiassed by power, unrestrained by fear, and guided only by truth, and principal inhabitants of the parish of Wednesbury, with the exceptions of a servile and unprincipled few, do testify, that as far as we know and believe, the conduct of the Rev. John Atcherley, during his residence among us, has been sober, pious, and exemplary; and we therefore, in the most respectful and humble manner, request his lordship, the Bishop of Lichfield and Coventry, will be pleased to continue him in the Curacy of Wednesbury, whatever may be the wish, or desire, and misrepresentation of wicked men. And we beg leave to assure his lordship, that in making this request, we are influenced only by a sincere regard for the defence of wounded innocence, for the cause of religion, and a wish to disappoint the malignant misrepresentations of falsehood; founded on dark, designing, and deliberate mischief. And for no other reason, but because Mr. Atcherley was desirous of doing his duty, by enforcing, in the mildest way, as a Clergyman and a Christian, decency and good order in the parish.

The Vicar of Wednesbury may initially have wished his Curate to depart in order avoid a confrontation with the clerk and the church wardens of the parish. But John Atcherley was not one for going quietly, and in the pursuit of justice for himself, John was now a threat to Alexander Haden’s own reputation. John Atcherley’s petitioning activities met with the following response from his Vicar, a letter dated 28 July 1805:

I HAVE received a petition signed by almost all the respectable inhabitants in Wednesbury, requesting your dismissal from the Curacy. In answer to which, I have informed them, that it is to take place at Michaelmas next.

John Atcherley regarded his Vicar’s claim as an “abominable falsehood”. “Eleven men only signed that petition,” wrote John, “of whom, I can only assure the reader, that I verily believe they are the least respectable, in point of morality, in the parish.” Regardless of how many parishioners had signed Alexander Haden’s petition, or of their respectability, the Vicar of Wednesbury had determined to use that document as a basis for casting out his Curate. John Atcherley was now fighting not just for his good name, but also for his livelihood.

Correspondence between the Revs Atcherley and Haden continued, and as you might imagine the letters became increasingly bitter. John also wrote further letters to the Bishop, requesting his intervention. However the Bishop, while seeming sympathetic towards John’s plight, was unable to prevent Alexander Haden from replacing John as Curate of Wednesbury. The problem was that John was not a licensed Curate, and this left him completely at the mercy of his Vicar.

A Mr Inman called on John Atcherley on 11 August 1805, and announced that he was the new Curate. John showed him the letters he had received from Alexander Haden, and from the Bishop, and Mr Inman “went away disgusted.” On Sunday 6 October, Alexander Haden took the service at Wednesbury himself. The following Sunday, another clergyman (Mr Cormouls) attended. After a brief discussion with John Atcherley, the two men agreed to share the duty: Mr Cormouls preached, and John read the prayers. John had the evening service to himself, but at the end of both of that Sunday’s services, the parish clerk announced that Mr Haden had dismissed John Atcherley from the Curacy of Wednesbury.

To the congregation, these must have been extraordinary scenes, and I imagine them sat in their pews, exchanging glances with each other while wondering what would happen next. John Atcherley did not leave them waiting for long. Contradicting the clerk, he announced: “I am not discharged by Mr. Haden, I have had no proper notice to leave the Curacy. Besides, I am here by agreement with Mr. Haden for twelve months, which agreement he has declared he would not suffer me to violate. And add to this, I am here by the permission of the Bishop …”

Despite John’s determination to remain until Christmas, Charles Neve signed the Wednesbury marriage register as Curate of the parish from 8 December 1805, and presumably took over all the other duties associated with that position. John Atcherley had been ousted.

Before leaving Wednesbury, and before publishing his pamphlet, John made attempts to have an independent investigation conducted into his complaints. The Bishop had agreed to this and suggested it should be carried out by some of John’s fellow clergymen, including Daniel Pape, Vicar of Penn. Alexander Haden did not however provide what John regarded as a “satisfactory answer” to Pape’s invitation to take part. At the beginning of 1806 therefore, the Rev John Atcherley published his ‘appeal to the world’, The Curate of Wednesbury and His Vicar.

John’s pamphlet seems to have persuaded Alexander Haden to at last submit to an investigation. The outcome – conveyed to the public through a notice published in the Staffordshire Advertiser of 10 May 1806 – partially vindicated John Atcherley, but also seemed to clear Alexander Bunn Haden of any wrongdoing:

WE, the undersigned, having been appointed to investigate and determine upon a very unpleasant dispute, between the Rev. Mr. Haden and the Rev. Mr. Atcherley, the particulars of which have been circulated in a Pamphlet, entitled “The Curate of Wednesbury and his Vicar,” are of the opinion (upon a full investigation of the correspondence, and all the circumstances connected with this dispute) that Mr. Atcherley wrote that Pamphlet under impressions extremely different from those which would have suggested themselves to him, had he been in possession of those facts which have been presented to us; that, in the first instance, the conduct of Mr. Atcherley never ought to have been impeached, nor is there any ground for suspicion of it, upon the infamous attempt recorded in his Pamphlet, upon the assertion of the Beadle, Harrison; and, we are convinced, upon a full and complete review of all the circumstances and facts, that the Rev. Mr. Haden has not conducted himself in any manner unworthy of his character and situation in life.
DANIEL PAPE, Vicar of Penn.
JOHN CLARE, Vicar of Bushbury.
JOHN BISHTON, jun. Kilsall.
March 31, 1806.

We, the Rev. A. B. Haden and the Rev. John Atcherley, having submitted the whole of our existing disputes to the Rev. Daniel Pape, the Rev. John Clare, & John Bishton, jun. Esq. do acknowledge ourselves perfectly satisfied with their decision.
A. B. HADEN,
JOHN ATCHERLEY.

I find it interesting that the clerical committee did not dispute any of the facts put forward by John Atcherley in his pamphlet, but said only that he would – if in possession of additional information – have formed different impressions. The language used to defend Alexander Haden is also, perhaps, not as robust as it might have been. We have only seen John Atcherley’s side of this story, but I am inclined to believe his version of events. What, though, were the facts which might have altered his views had he been in possession of them? Perhaps there is a clue in one of the Bishop’s letters to John, in which the Bishop alluded to “Mr. Haden’s ill state of health.” John thought that “Mr. Haden’s health was very good”, but not all illnesses are obvious to the naked eye.

John Atcherley’s name was cleared, but his future no longer lay in Wednesbury – or with the woman he had hoped to marry, Miss Baylay. That, to me, is the saddest part of this story.

> On to Chastity, Missionaries, and the Rev John Atcherley

Picture credits. Lichfield Cathedral: Photo © Copyright George Mahoney, taken from Geograph and used under a Creative Commons licence. Wednesbury St Bartholomew – lectern: Adapted from an illustration in A History of Wednesbury, in the County of Stafford by John Nock Bagnall, printed in 1854 and therefore out of copyright.

Digital edition of The Curate of Wednesbury and His Vicar (in PDF format).

My grateful thanks are extended to Martin James (Family Heritage Search), for providing me with digital photographs of the pages of a copy of The Curate of Wednesbury and His Vicar held at the William Salt Library in Stafford.