Yesterday, one of my Google searches for an incorrect spelling of the surname Atcherley led me to a fantastic find on YouTube: a short British Pathé film featuring Air Vice Marshall David Francis William Atcherley [

]. It is the first film of David that I have found – and it may also be the final film in which this Atcherley twin appeared. Less than 4 months after the footage was captured, David disappeared without trace while flying over the Mediterranean Sea between Egypt and Cyprus.

Having served as Basil Embry’s Senior Air Staff Officer at Fighter Command from 21 Jan 1950, in January 1952 AVM David Atcherley took up a new post as Air Officer Commanding (AOC) of 205 Group, Middle East Air Force, in Egypt. He became the first AOC to arrive by jet when taking over a command.

David set up home in a houseboat, which he described as “large and comfortable and very cool in the summer.” His work in Egypt’s Suez Canal Zone involved a lot of office work and “high-powered meetings” but also provided plenty of opportunities for flying. In one of his letters home he wrote:

I’m holding a big air exercise from Tuesday to Saturday next week. We’ve got quite a big air force here at the moment and I thought it would be a good thing  to keep them occupied. I hope they’ll enjoy it.

The big air exercise David referred to was most likely ‘Hightime’, which was the subject of the above-mentioned British Pathé film. I found this gem after searching online for the word “Atchedey”, having noticed that that the letters ‘r’ and ‘l’ used consecutively (“rl”) might in some situations be interpreted as a ‘d’. (See Lost in transcription for more misspellings of the surname Atcherley). The film shows David getting into his aircraft (from about 47 seconds in to 1:10) and, right at the end (from about 3:43), talking to his officers in the Operations Room.

David Atcherley’s last letter home was sent on Sunday 1 June 1952. He told of his planned move to “the big house” the following Saturday, and of a party he was going to give for senior local RAF and Army personnel so that they could all get to know each other. He also said:

I’m off to Cyprus tomorrow morning, merely for the fly. I’ll deliver a letter to the Air Commodore, have lunch and fly back here in the evening. It’s Whit Monday tomorrow, a holiday and nothing much to do locally unless you sail.

It appears that either David’s plans changed after he wrote, or that he decided to make another visit to Cyprus on Saturday 7 June. Either way, at about 6 o’clock on the morning of that fateful day the Air Vice Marshall set off from RAF Fayid for Nicosia in a Meteor PR 10 jet, WB.161. David Atcherley was never seen again, and the last that was heard from him was by radio, 2 minutes after take-off, when he checked on the weather conditions at Nicosia.

Later that day, two messages were sent “by secure means” from Middle East Air Force headquarters to the Air Ministry in London, both headed FLASH SECRET. One of them read as follows:

Regret Atcherley overdue beyond maximum endurance on lone flight to Cyprus this morning in a Meteor 10. Full search and rescue measures already in operation. Shall extend air search to Southern Areas of Turkey if necessary. Foreign Office may like to know this.

Para. 2. Understand he did not take dinghy pack or Mae West and had ejector seat taken out before leaving.

Para. 3. Normal casualty reporting action will be taken by 205 Group as necessary but feel you and C.A.S. will like to have this stop press news at once for personal information.

(‘Mae West’ was the popular nickname for the inflatable life-jacket used by RAF personnel at that time.) 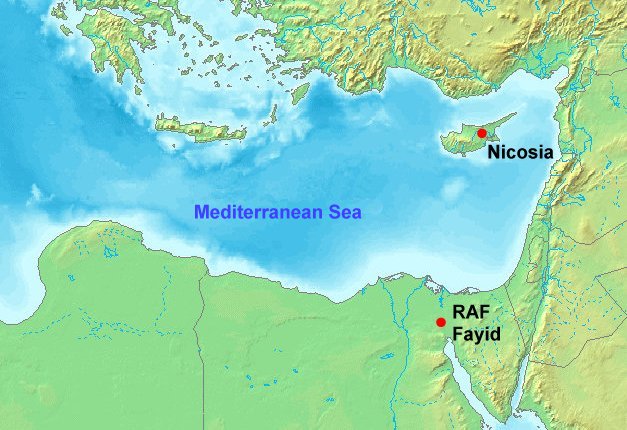 Further messages to the Air Ministry followed on 8 June. It was confirmed that an “intensive air and sea search” had taken place during daylight hours for two days running, but the results had been “entirely negative”. The search operation had begun 40 minutes after David was overdue at Nicosia, with the despatch of Meteor and Vampire jets followed by Lincolns and Valettas, and then by Mosquitos and Beaufighters. Lancasters from Malta also joined in. In total, 50 search sorties were flown from the Canal Zone, and a large number from Cyprus. Searches were made by forces from Turkey, Lebanon and Israel too, and by an American aircraft. In addition, naval vessels were engaged.

Finally, on 10 June 1952, the Middle East Air Force (MEAF) despatched the following message: “Land search in Port Said area and small area in Lebanon continued on June 9 with negative results. All search action has now been discontinued and regret there can be little hope of Atcherley’s survival.”

I am commanded by the Air Council to inform you that they have learned with profound regret that the search for the aircraft piloted by your brother, Air Vice-Marshall D.F.W. Atcherley, C.B., C.B.E., D.S.O., D.F.C., on 7th June has proved unsuccessful.

The Air Council, recalling your brother’s long record of distinguished service, desire me to extend to your parents and to yourself an expression of their deepest sympathy.

To this day, the circumstances in which David Atcherley disappeared remain a mystery. Weather conditions and visibility were good, and David’s Meteor was fully fuelled giving him 2¾ hours flying time at height. An initial suggestion was “unconsciousness of Pilot through oxygen failure”, and in a letter to the Marshall of the RAF dated 12 June 1952, Air Chief Marshall Sir Arthur Sanders of the MEAF wrote: “I am afraid the only conclusion is that he went straight in and down into the sea, probably through lack of oxygen. The sickening thing is that we have no real clue at all as to what happened.”

Sir Theodore McEvoy later stated that David had said to him during a conversation some three weeks before he was lost, “What do you know about the instruments in these aeroplanes? I can’t see them!” He suggested that as David never wore spectacles when flying, his inability to read his flight instruments might have played a part in his disappearance. The Pathé news footage of David getting into his aircraft during the ‘Hightime’ exercise certainly shows that he was not wearing glasses on that occasion.

With his own letter to the Air Marshall of 12 June 1952, Sir Arthur Sanders enclosed a number of additional messages expressing sympathy and loss, which had been sent to him by the local British Embassy and by representatives of the armed forces in the Canal Zone. One was from the Commander-in-Chief of the Middle East Land Forces, General Sir Brian H Robertson, who wrote:

Atcherley had only been with us a few months. Right from the start he captured the affection and admiration of my officers to a most remarkable degree. I had never met him before myself, but from the moment when I first shook hands with him I knew that I liked him.

I have heard men say of him, without meaning to be unkind, that he was crazy, if so it was the craziness of real heroism. He was a man of whom your Service can be immensely proud. We in the Army are terribly sad at his loss and shall always remember our association with him with gratitude and great respect.

Of course, the man who felt David Atcherley’s loss the most was his twin brother Richard. He had wanted to fly out and join in the search operation for David, but this was very sensibly ruled out by Basil Embry. To complement the private family memorial service in York, Richard organised a public service in London which was attended by high-ranking representatives from all three of the armed forces, various dignitaries, about 120 officers and wives from Fighter Command, and 50 from other RAF Commands. A further service held at Ismailia in Egypt gave Richard the opportunity to fly, alone and in a Meteor, the same course that David had set out on but never completed. John Pudney, the Atcherley twins biographer, later summed up the impact on Richard thus:

The loss of David was more profound in its impact than that of any other blood relation. Close friends observed the profundity of the shock, the fracture of the pattern of a lifetime. … no words can describe the sense of desolation and loneliness at losing one whom he had lightly described as his ‘better half.’

Picture credits. Eastern Mediterranean, showing RAF Fayid and Nicosia: Based on a public domain image from Wikimedia Commons. Meteor PR 10: Photo, from Flight magazine, 27 May 1955, page 729, taken from Flight Global archive, which states “we’re positively encouraging you to link to, copy and paste from, and contribute to the development of this unique record of aerospace and aviation history”.