I will confess right now, this story is much more about the Salop Penitentiary than it is about the Misses Atcherley. After discovering that Anne [

] had subscribed to this Salopian institution, I became curious as to exactly what it was. Finding little information online via Google, I dug deeper with the aid of the British Newspaper Archive. Slowly, Shropshire’s papers’ pages shed light on the nature and the history of a Christian mission which could only speak of its work in the most general terms. Now it is time for the story of this relatively short-lived institution to emerge from the shadows into which it had slipped.

THE COMMITTEE of the SALOP PENITENTIARY have the satisfaction of stating that they have contracted for the purchase, for the sum of £750, of suitable premises in St. Julian’s Friars, having a large garden, and centrally situated.
They earnestly appeal for contributions to enable them to complete the purchase at Lady-day next, by which date £350 at least will be required, in addition to the following donations, which are gratefully acknowledged […]

The list of donors given beneath the above notice (published in the Shrewsbury Chronicle of 17 February 1865 and in Eddowes’s Shrewsbury Journal on 22 February) was headed by The Lord Viscount Hill with a gift of £20. Further down the list Miss Darwin appeared (Susan Elizabeth, a sister of Charles Darwin) with her donation of £10. The same sum was given jointly by The Misses Atcherley. The Atcherleys gave again in 1872, their additional subscription amounting to £6.

Why, I wondered, were the sisters donating money towards the building of a penal institution – especially when there was already a publicly-funded county gaol in Shrewsbury? During my first attempts to educate myself about the penitentiary, I was quickly disabused of the notion that it was a prison! Thanks to a paper by Susan Mumm in the Journal of Social History, I learned that: 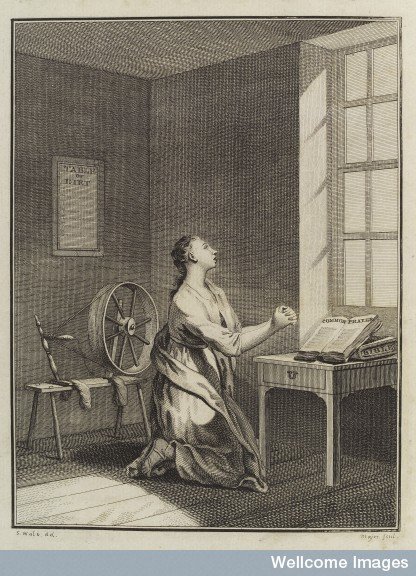 In Victorian Britain, a female penitentiary was not a penal institution for the punishment of crime, but a charitable enterprise entered voluntarily by members of an outcast group, popularly known as ‘fallen women.’ […] Penitentiaries were intended as transformative institutions, where female outcasts of many kinds could be changed into ‘honest’ women, a conversion which incorporated both a spiritual change from sinner to penitent, and an equally important social shift from dissolute and deviant female to respectable woman. The penitentiary, despite its penal overtones, was a therapeutic community which was not experienced as unbearably punitive. As well as reforming prostitutes, Anglican penitentiaries in Victorian Britain offered shelter to the survivors of incest and sexual violence, women fleeing abusive relationships, and female alcoholics.

Having found out what a Victorian penitentiary was, and that these institutions were closely connected with the church, I understood why good Christian folk like the Misses Atcherley supported them. However, tracking down more information about Shrewsbury’s penitentiary took a little more tenacity, thanks to Victorian propriety. Those in charge of institutes working with former prostitutes could not really publicise their work in quite the same way as those who ran projects to relieve, treat or educate the poor.

Appeals to the public were nonetheless essential to the foundation and maintenance of the Salop Penitentiary, and such appeals in the local press provide some insight into the struggle to establish, renew and retain Shrewsbury’s home for ‘fallen women’. It all began with this public notice, in January 1829:

SHREWSBURY PENITENTIARY SOCIETY.
SEVERAL Applications having been lately made to the Clergy of the different Parishes in this Town, by Females expressing a Desire to discontinue their present abject and degraded Course of Life, such as seemed deserving Objects have been removed to Penitentiaries at London or Liverpool, at the Expense of the Clergy and such private Friends as they were able to solicit. There being no Doubt but that if the Opportunity of Reformation were offered, many more would readily avail themselves of it, it is proposed to establish a Society in Aid of its Design, and to form a District Branch with some already existing Institution. For this Purpose, liberal Subscriptions will be needful from the Town at large; and it is confidently hoped, that the Necessity and Advantages of such a Society being generally acknowledged and felt, every Effort will be made which Christian Benevolence can suggest, to reclaim such as may evince a sincere Anxiety to be rescued from a Condition so miserable and helpless.

Sixteen of Shrewsbury’s clergymen contributed a guinea apiece to start a subscription, and formed a committee “for the Management of the Affairs of the Society, to investigate such Cases as may be recommended by Subscribers, and, after proper Probation, to send to the Establishment those whom they deem suitable Objects.”

It seems that it took some time for the Society to make progress. Its early history was described as follows in a newspaper report in 1866:

The Salop Penitentiary, for the rescue of young females, was commenced in the year 1843. Its promoters began their operations with a fund of £100, raised by donations and subscriptions. For five or six years they sent such young women from this county, as were found desirous of leaving a course of vice, to establishments already existing at Liverpool, Chester, and other places; and it is satisfactory to state that several of those, thus cared for, were thoroughly reformed, and have continued to maintain a reputable character to the present time. In 1849, having failed to effect an amalgamation with the Chester Penitentiary, the managers determined to make an effort to provide a refuge in Shrewsbury, and having succeeded in raising a sum of £400, they purchased a house in Dogpole, capable of accommodating 12 to 13 inmates. 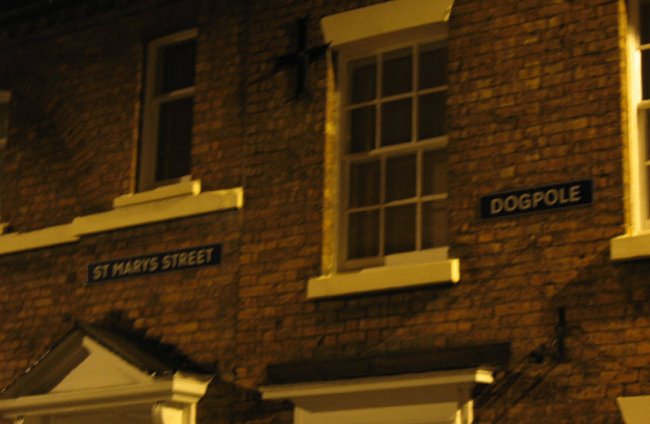 Two years passed before for the society achieved its ambition. However the task of finding sufficient funds to keep the refuge running became a perennial problem, as this appeal from 1856 shows:

THE Managing Committee are sorry to appeal to the public on behalf of this Institution, which opened in Shrewsbury, in January, 1851, for the Town and County. Up to the present time the Subscriptions and donations have not been sufficient in any given year, to meet the expenses necessary for the maintenance of the Institution; but hitherto the committee have been able to fall back upon a reserved Fund in the Savings Bank, which has now been entirely expended.
Owing to the increased number of Inmates, and the high price of provisions, the funds are so nearly exhausted that it will be impossible without immediate and liberal help, to carry it on beyond Midsummer. Under these circumstances an urgent appeal is made to the Public.

Under the superintendence of a very efficient Matron, the strictest economy has been exercised in the expenditure; and the money received during the past year for Washing and Needlework, £51. 0s. 0d. has exceeded that of any previous year. The discipline and internal state of the Institution are also most satisfactory, several of the Inmates having given evidence that God’s blessing has rested on the efforts made for their benefit. Since January, three have been placed in respectable situations.

The question, then, is simply this—whether an Institution which has done and is doing so much good, shall have its doors closed for want of the necessary support, or whether it shall be kept open to be a refuge and a blessing to the many who are constantly applying for admission.

The above appeal (and doubtless many more like it) successfully kept the Salop Penitentiary open, but by 1863 the institution had outgrown its original home. Its Committee, “having obtained an eligible site for the erection of New Premises more suited to their purpose” appealed for the sum of £850 to carry their “benevolent design” into effect. The appeal stated: “The present house has had its full number of inmates for some time, whose earnings go very far to support the Institution. Larger and more commodious premises, with a small garden for exercise, are much needed.” It was presumably to this appeal that the Misses Atcherley (and Miss Darwin) contributed in 1865. Their donations must have been very welcome, and helped to complete the purchase of the premises sought by the committee.  Returning to the newspaper report from 1866, from which I quoted earlier:

Although the premises [at Dogpole] were in some respects unsuitable, having no outlet for recreation or laundry purposes, the inmates have been able to earn from £150 to £200 per annum, by washing, and needlework, towards their own maintenance. They usually remain two years in the institution, and in that time are commonly found fitted for service in respectable families. Many have obtained such situations, and have conducted themselves to the satisfaction of their employers; and of many it may be said that they give every indication of being true servants of Christ, and adorn His Gospel by a consistent demeanour.

The institution is under the control of a committee of ladies, who regularly visit and watch over its affairs, , and kindly assist the matron and sub-matron with their advice and countenance. In 1863 a gentleman’s committee was formed, consisting of most of the incumbents of the parishes in Shrewsbury, and some philanthropic laymen, by whose exertions more suitable premises have been purchased in St Julian’s Friars, having the advantage of a retired, yet central, situation, and a large garden for the healthy recreation of the inmates, as well as for a drying-ground.

So far the institution has continued its operations with varying success, but not without abundant encouragement. Upwards of 100 young women have passed under its care for a longer or shorter period, more than two-thirds of whom have turned out favourably. The committee, therefore, feel confidence in making an appeal on behalf of an institution which has had a fair trial, and has proved itself worthy of the support of all who feel for the sins and miseries of their fellow-creatures. 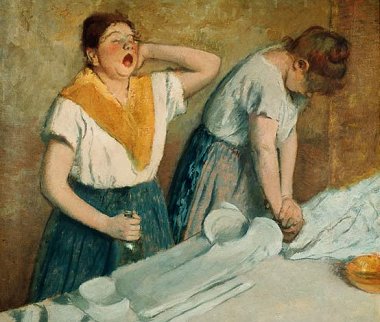 The penitentiary’s costs had at this time exceeded its income (from annual subscriptions, donations, and earnings from washing and needlework) by around a hundred pounds for some years. Its committee therefore appealed for increased contributions, “there being no other similar institution either in Shropshire or Staffordshire, and the desirableness of which no one can doubt, who is aware of the vast extent of ‘the great social evil’ in our midst.”

Picture credits. A repentant young woman praying: Illustration from Thoughts on the plan for a Magdalen-House for repentant prostitutes, published 1758; from Wellcome Library, London (image L0037464) and used under a Creative Commons licence. Dogpole, Shrewsbury: Original photo © Copyright Stephen Craven, taken from Geograph, and adapted, used, and made available for re-use under a Creative Commons licence. Washer women: Original painting by Edgar Degas now out of copyright; adapted from an image at Wikimedia Commons.

Copies of all newspaper pages below viewed at British Newspaper Archive unless otherwise stated. See also references for previous stories about the Misses Atcherley.