] reveal something of the sisters’ story from 1841 up to the end of the 1800s. They tell us that between 1841 and 1851, the sisters had moved from their native parish of Baschurch to the town of Shrewsbury. The latter census shows the trio – who were often referred to as the Misses Atcherley – as landed proprietresses. In later years they were recorded as fund holders or annuitants, or living on “income derived from property”. How did the Misses Atcherley acquire the land and the funds that supported them, and on what did they spend the income from these sources? In this, the beginning of a series of stories about the Atcherley sisters of Shrewsbury, I will look mainly at the first of these two questions. 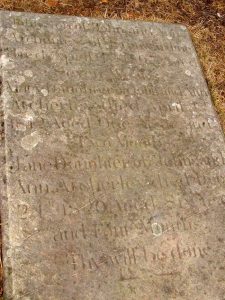 Anne, Hannah and Margaret Atcherley were baptised on 14 November 1799, 11 June 1801 and 7 April 1817 respectively, at Baschurch All Saints. They were three of the ten children born to John Atcherley [

] and his wife Anne (née Parton) at Stanwardine in the Fields. Five of their siblings (four girls and one boy) had died in infancy or early childhood (see MIs at Baschurch All Saints (3), where a larger version of the photo shown here can be seen). Their two surviving sisters, Sarah and Martha, had both married by 1841 and the census for that year recorded the three spinsters with their parents. By that time the family had moved from Stanwardine to nearby Weston Lullingfields.

Between then and 1851 the sisters relocated to the county town of Shrewsbury. My guess is that this happened following the death of their father John in 1847, or more likely after their mother Anne passed away in 1849. Although John did not (to my knowledge) leave a will, it appears that Anne, Hannah and Margaret each received a generous inheritance from their farming father. (Sisters Sarah and Martha had meanwhile most likely received suitable ‘marriage portions’ when they wed.)

John was the eldest son and heir of Thomas Atcherley and his wife Hannah (née Cureton), and he certainly had wealth to dispose of at the time of his demise. In his will of 1796, Thomas had bequeathed John the “Teneant Right and interest” in the farm Thomas held at Stanwardine, along with the farm’s livestock, crops, implements of husbandry and other goods and chattels. In addition, John was left the “Estate at Morton” which featured in Thomas and Hannah’s marriage settlement of 1770 (see Love and Marriage (Settlement): Thomas Atcherley and Hannah Cureton).

The land at Morton – or a portion of it – evidently descended to Margaret Atcherley after John’s death. The evidence for this takes the form of a notice published in Eddowes’s Shrewsbury Journal of 24 September 1856:

TO BE SOLD BY PRIVATE TREATY, (either in one Lot, or in several Lots, as may best suit the convenience of purchasers), the several Tithe Commutation Rent Charges, payable to the Improprietor, amounting together to £30. 19s. 1d. charged on, and issuing out of Lands, situate in the Township of Morton, in the parish of Oswestry, in the County of Salop, the respective properties of Lord Godolphin, Miss Margaret Atcherley, Mr. Edward Davies, the Rev. Edward H. Dymock, Mr. William Thomas, and others, and the Reverends Thomas Salway, and John H. Montague Luxmoore.

Although Margaret sold the Tithe Commutation Rent Charges of her land at Morton, it seems likely that she retained ownership of the land itself, and would therefore have benefitted from the rents arising from it.

The funds at the Misses Atcherley’s disposal were invested, so that they would generate annuities or interest payments. Some insight into how this worked for the Atcherley sisters is provided by letters sent by Margaret to Messrs Longueville, Jones and Williams, a firm of solicitors in Oswestry, during 1874. The letters have survived to this day and although I was outbid when they were sold via eBay, the sellers kindly provided copies and gave permission for me to use them on this website.

Margaret Atcherley’s letter of 5 October 1874 is particularly informative. It reveals that the sisters had £750 which they were happy for Messrs Longueville, Jones and Williams to invest in the mortgage security of a certain Mrs Pryse. The sisters were relying on their solicitors word that the property upon which the mortgage was secured was “of sufficient value for the loan.” 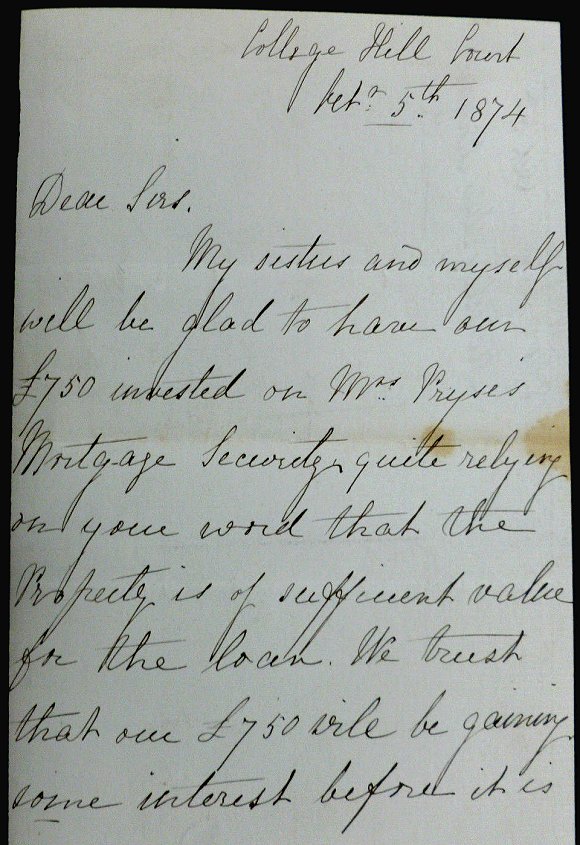 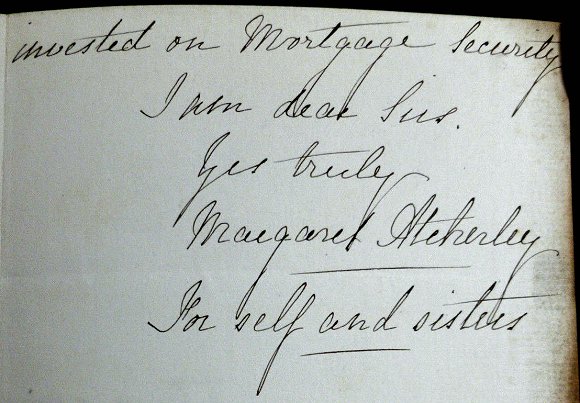 A month later, on 4 November, Margaret wrote as follows: “Dear Sirs, Will you please  send a line by return stating if Mrs. Pryce’s security for £1000 at Xmas is on land? and where it is situated? that the property is quite worth the money. We safely trust to yourselves.” This appears to relate to the investment of a separate sum of money. Other letters show that the Misses Atcherley had money invested in additional mortgage securities too – and that they didn’t always receive their interest payments when they were due!

Advertisements in the Shropshire newspapers give an indication of the rates of interest which borrowers could expect to pay, and which lenders (or investors) like the Misses Atcherley could therefore expect to receive. A notice in the Wellington Journal of 17 March 1877 for example, placed by Wellington solicitor W M Taylor, stated: “Money.—Any sum from £20 to £1,000 and upwards, ready to be Lent on approved Mortgage Securities, at £4 to £4½ per cent.”

Anne and Margaret, the eldest and youngest of the three spinster sisters, also invested money in stocks. The Great Western Railway Shareholders Index, held by the Society of Genealogists, shows that when Anne Atcherley died her Consolidated Ordinary Stock (amount £915) was transferred to Margaret. On Margaret’s passing, her Consolidated Ordinary Stock (£682) and 4¼% Debenture Stock (£572) were transmitted to her nephews, John Atcherley Jebb and his brother George Robert Jebb.

Other records relating to the demise of the Misses Atcherley reveal the full extent of these females’ fortunes. The records in question are entries in the ‘National Probate Calendars’. When Hannah Atcherley passed away on 18 May 1885 she had not left a will; administration of her estate was granted to Anne and Margaret. Hannah’s personal estate was valued at £3,539 6s 4d. Anne Atcherley was the next to ‘depart this life’, on 1 August 1892. Again there was no will. Administration was granted to Margaret, with Anne’s effects totalling £6140 13s 3d. (There was a further grant of probate, to John Atcherley Jebb, in 1898 when effects of £456 were recorded.)

Unlike her sisters, Margaret Atcherley did make a will, in which she appointed the above-mentioned nephews John Atcherley Jebb and George Robert Jebb as executors (which is why they took receipt of Margaret’s GWR stocks). Margaret died on 14 April 1898, leaving effects to the value of £9359 13s. 6d. 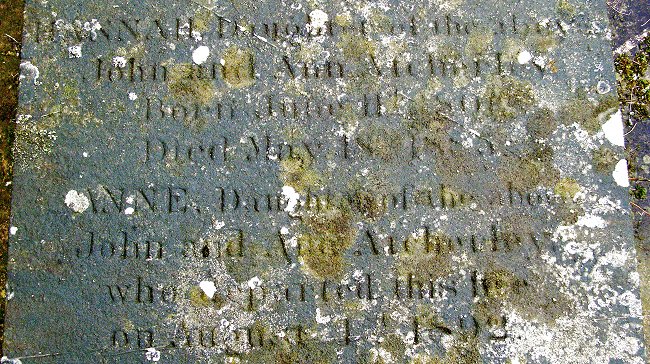 Monumental inscriptions for Hannah and Anne Atcherley at Baschurch. Margaret’s inscription, mostly covered with moss and lichens, is omitted from this picture.

All three of the Atcherley sisters passed away at College Hill in Shrewsbury, where they had resided since the late 1840’s or the beginning of the 1850s – for nearly half a century in Margaret’s case. So in answering the last of the three questions which I posed at the beginning of this story – on what did the Misses Atcherley spend their income – their sanctuary in Shrewsbury is a good place to start.

The sisters were recorded at College Hill (later 10 College Hill or College Hill Court) in the censuses of 1851 to 1891, and also in directories such as the Post Office Directory of 1863 and Kelly’s Directories of 1870 and 1895. The census schedules enumerated one or more servants in the same household as the Atcherleys: just one in 1851, but two in 1861, ‘71, ‘81 and ’91 (listed as a housemaid and a cook in all but one of those years).

Anne, Hannah and Margaret did not own the house in which they lived. That much is clear from notices of the sale of the premises, a freehold property which was “in the occupation of the Misses Atcherley.” The sisters probably held the leasehold, as they remained at College Hill through at least three sales (by auction) of the freehold. The first of these sales was advertised in 1855, and from the description then given of the property we get an idea of its extent:

Almost exactly the same description was used when the property was put up for sale by auction again in 1870, the main differences being that the number of bedrooms was specified (four) and the words “in good repair” were omitted. The description of 1870 was then repeated word for word in 1877 when the College Hill residence was once more offered for sale.

Although 10 College Hill was home for the Misses Atcherley, they did not spend every night of their tenancy under its roof. The income generated by their land and investments enabled the sisters to take holidays and, in the words of the old song, they did “like to be beside the seaside”.

> On to The Misses Atcherley and their seaside holidays – Part 1.