< Back to The Misses Atcherley and their income from property

We will probably never know the full extent of the Misses Atcherley’s sojourns away from Shrewsbury, when they took their coastal vacations. However, thanks to the lists of visitors printed in the newspapers of certain seaside towns in Wales, we do know about some of the favourite destinations of Anne [

]. And additional research has shown that some of the guests who shared the Atcherley sisters’ holiday locations, were in fact relations…

It appears that Rhyl, now part of Denbighshire but then lying in the county of Flintshire, was, in the 1850s, the first Welsh resort to host a holiday by one of the Atcherley sisters of Shrewsbury. Back at the beginning of the 1800s, Rhyl was a small settlement in the parish of Rhuddlan, with a population which fell from 289 in 1801 to 252 in 1811. But in 1839 Joseph Hemingway wrote about Rhyl as follows:

Until the last few years, the place was small, and its visitors confined chiefly to persons from the immediate neighbourhood; it has recently, however, experienced great improvement, and the number of its visitors has kept pace with the additional accommodations afforded them. There are now two spacious and commodious hotels, with four smaller inns, and numerous lodging houses, intermingled with several neat cottages, used for the summer residence of some of the wealthy neighbours. There are machines for the accommodation of bathers, and hot and cold baths (supplied with sea water) erected in 1831, to which are attached billiard and news rooms, and a spacious bowling green.

Rhyl continued to grow, “from a small village to a populous town”. Visitors were attracted by its “excellent bathing and beautiful and salubrious situation”, indeed, Rhyl was “considered as the best bathing Place in the Principality.” The resort began to gain popularity in winter too, when it was “celebrated for the mild character of its air, alternating with the healthy and reviving breezes incident to its highly favoured situation”. All of these advantages attracted guests of all classes, from the workers of Liverpool (who arrived on the two steamers which plied their trade daily along the coast) to the gentry and aristocracy. The presence of Earls, Lords, Ladies and Countesses made Rhyl a fashionable as well as a healthy place to stay.

Then the railway came to Rhyl, and the fortunes of this seaside settlement soared. The first steam train pulled in to Rhyl station on 28 September 1847, on the Chester and Holyhead Railway. A further development in Britain’s growing rail network, the opening of the full length of The Shrewsbury and Chester Railway on 14 October 1848, then made Rhyl easily accessible to the good people of Shropshire – including the Atcherleys.

It is possible that the Miss Atcherley staying at 1 Seabank Cottages, Promenade Terrace, Rhyl, in August 1850 was Margaret, Hannah or Anne from Shrewsbury. This Miss Atcherley appeared in The Rhyl Visiter, part of the North Wales Chronicle, on 17 August 1850, along with the Misses Lowes of Whitchurch and Mr and Mrs Ironmonger and Family of Wolverhampton, as a guest at the aforementioned address. They were similarly listed in the previous week’s edition, although Miss Atcherley’s surname was then given as Archley. Without an initial or a place of origin however, I can’t be at all certain of this Miss Atcherley’s identity.

Thankfully it is very easy to identify the Miss Atcherley who appeared in The Original Rhyl Visiter printed in the North Wales Chronicle of 20 September 1856 and in the following week’s edition. “Miss Margaret Atcherley, Shrewsbury”, listed at 24 West Parade, is clearly one of the three sisters who were then residing at College Hill in Shropshire’s county town. Although Margaret was not accompanied by either of her spinster sisters, she was not travelling alone. I have recently discovered that other guests at 24 West Parade – Mrs Parton and Mrs Maddocks of ‘The Woodlands’ – were related to Margaret Atcherley.

Margaret’s mother was, before her marriage to John Atcherley, Anne Parton. Anne’s brother John Parton (1768–1837) married Mary Gittins (1781–1867) in 1811. She was, I believe, the Mrs Parton who holidayed in Rhyl along with her niece by marriage, Margaret Atcherley. Mrs Maddocks, meanwhile, would have been John and Mary Parton’s daughter Mary (1814–1897), who married Thomas Maddocks, of The Woodlands near Wem, Shropshire, in 1837. She was Margaret Atcherley’s first cousin, so this trip to Rhyl in 1856 was very much a family holiday. 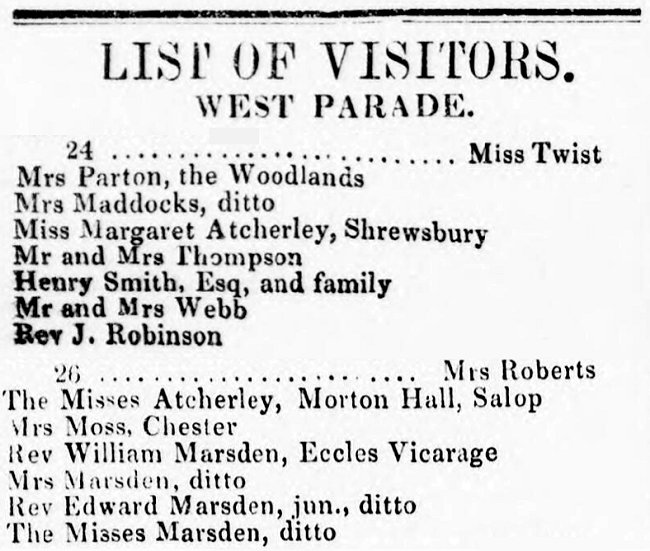 Just to add to the family atmosphere, there were other Atcherleys residing in Rhyl at the time of Margaret’s visit. Right next door to Margaret Atcherley and Mesdames Parton and Maddocks, at 26 West Parade, were D F Atcherley Esq. and “The Misses Atcherley”. Although they were said to be from “Mortish Hall” (and then “Morton Hall”), David Francis Atcherley and his sisters (how many of them, I wonder?) were of course from Marton Hall in Shropshire.

The Atcherleys at 26 West Parade were fifth cousins twice removed of Margaret Atcherley at number 24, their shared ancestor being the first Thomas Atcherley of Marton back in the 1600s. The Atcherley brother and sisters from Marton were listed in The Original Rhyl Visiter of 13 September 1856, in the following week’s edition only the sisters were named (see the image above). Their stay overlapped that of their distant cousin Margaret by just one week. Had this been pre-planned? Or was it the most incredible coincidence? Whichever one of these options applied, my mind is boggled by this reunion of distant Atcherley relatives!

The Misses Atcherley of Marton would, in future years, return to Rhyl and make it a rather more long term residence – another story for another time. As for the Misses Atcherley of Shrewsbury, I have found no further record of any of them in Rhyl, the ‘Paradise of Cambria’. It seems that other places in the Principality held greater attraction for these Atcherley sisters.

The first holiday taken by more than one of the Atcherley ladies of Shrewsbury was, to the best of my knowledge, in 1859. This time instead of heading north-west from Shrewsbury as Margaret had done three years earlier, the sisters headed south-west, to Aberystwyth on the coast of Cardiganshire. The journey would not have been quite so speedy nor as easy as Margaret’s train ride to Rhyl. 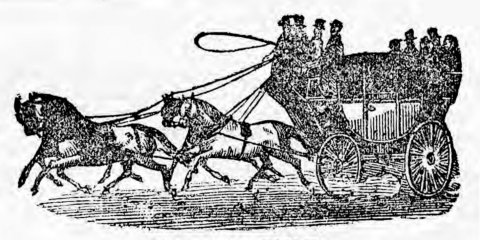 To be sure, transport from Shrewsbury to Aberystwyth in 1859 was better than it had been back in the early 1800s. In 1815 there were just two horse-drawn coaches a week running between the two towns (a journey of around 75 miles) during the summer, and one a week in winter. By 1826, thanks to improved roads and the town’s increasing popularity as a coastal resort, coaches were making the journey in one direction or the other on most days of the week during the summer season.

Then, Aberystwyth was in the ascendancy for much the same reasons as Rhyl soon would be. The author of a guide to the town wrote at that time that “It bids fair to rival the first of the English Marine Bathing Towns.” Elsewhere in his book he explained why, and we can see what attracted the Misses Atcherley:

It is impossible on entering Aberystwyth, to catch the first glimpse of it, unaccompanied with the most vivid sensations of wonder and delight. It lies embosomed between its fostering hills, in a sweet valley, threaded by the Rheidol, close to the margin of the sea. Unlike the tame and monotonous scenery that characterizes many Watering Places, Beauty and Variety seem the twin Goddesses of the place; or, if a third be admitted, the presiding Deity of the bracing breeze, bright-eyed Health, completes the trio. […]

In addition to the convenience and excellence of the bathing, the salubrious air, and surpassing beauty of the country, Aberystwyth possesses, like Scarborough and Brighton, an advantage over many places on the coast, that of a fine chalybeate spring in its immediate vicinity, the use of which is applicable to, and will much assist in, the cure of many diseases for which the sea is visited.

Although access to Aberystwyth had improved still further by 1859, the Atcherley sisters would have travelled at least part of the way there (if not the whole way) by good old-fashioned horse-drawn coach. The railways had extended into Shrewsbury from various directions from the end of the 1840s (starting with the aforementioned connection to Chester in 1848), killing off most of the coaching services along those routes in the process. However in 1859 it was not possible to travel all the way from Shrewsbury to Aberystwyth by train, and this remained the case until 1864. 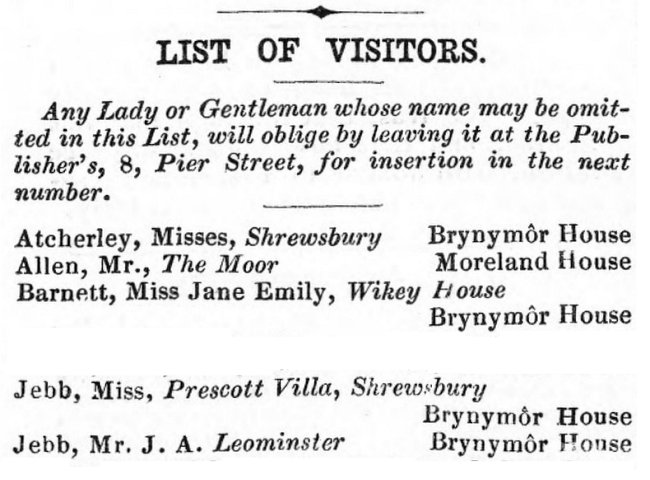 According to the Aberystwyth Observer of 16 July 1859 (see image above), the Misses Atcherley of Shrewsbury were staying at Brynmor House, along with a number of other guests. Once again, some of those guests were relatives. Mr. J A Jebb of Leominster was John Atcherley Jebb, a nephew of the sisters, the oldest son of Martha Jebb (née Atcherley). Aged 22, John was manager of the Leominster and Kington Railway at that time. The following year he would be appointed traffic manager of the Bahia and San Francisco Railway in Brazil! Miss Jebb of “Prescott Villa” may have been one of John’s older sisters, then resident at Prescott in Baschurch parish.

It seems that it was quite some time before the Misses Atcherley returned to Aberystwyth. Perhaps this was because of the more arduous journey to that resort, in comparison with taking trips to the north coast of Wales. But in August and September 1874, by which time the journey could be made wholly by train, the Misses Atcherley – and maid – of College Hill Court, Shrewsbury were back at Aberystwyth. 2 Laura Place was their holiday home there for two to three weeks. The view of The Terrace at Aberystwyth in the photograph below dates from the 1890s, but it is probably not dissimilar to that which Anne, Hannah and Margaret would have enjoyed. 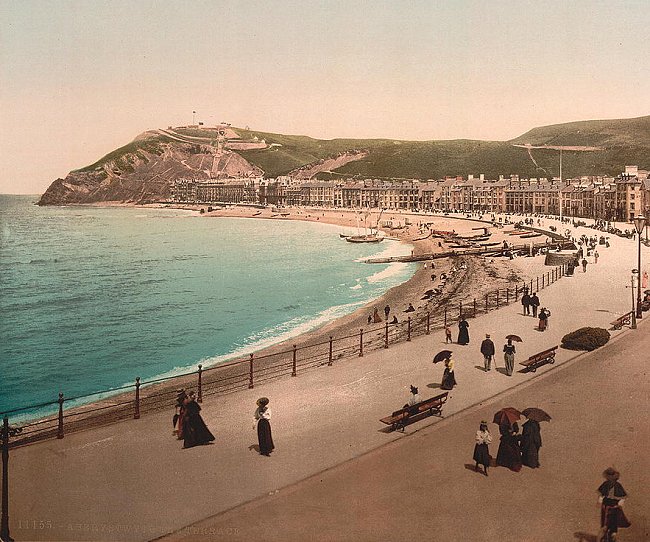 So far as I know, this was the last holiday which the Misses Atcherley of Shrewsbury took together. Margaret would make at least one more trip to a different destination on the coast of north Wales. But between their two known Aberystwyth adventures, Anne, Hannah and Margaret Atcherley took a liking to Llandudno.