Moortown, in the Shropshire parish of Ercall Magna (or High Ercall), was home to several generations of one Atcherley family for a period of around 150 years. The ‘founding fathers’ of this line Atcherleys were Samuel (1687 – 1731) and his son John (1715 – 1750). It was however the wives of these two men who had the strongest connections with Moortown, and it was John’s wife in particular who ensured that their descendants settled in that place.

The first Atcherley who lived at Moortown was Elizabeth [

] – though she did not actually bear that surname during her residence there. She became the wife of Samuel Atcherley on 30 November 1710, the nuptials taking place at the church of St Mary & All Saints in the village of High Ercall. (It is my custom to refer to the village as High Ercall, and to its parish as Ercall Magna.) As I have written in Samuel Atcherley’s true and perfect inventory (Part 1), Elizabeth was the widow of Samuel Roycroft. It was as that Samuel’s wife (and, for two and half years, as his widow) that Moortown had been Elizabeth’s home.

The venue for the wedding of “Samuel Roycraft of the Parish of High Arcol & Elizabeth Shelton”, on 7 December 1699, was Tettenhall in Staffordshire (nowadays part of Wolverhampton). This was Elizabeth’s home parish. The very next entry in the marriage register, dated exactly two months later on 7 February, was for John Shelton Junior of Compton and his bride Hester Bate. John was, I believe, Elizabeth’s brother (she mentioned him in her will), and he was evidently named after their father. The baptisms of both siblings took place at Tettenhall, John’s on 6 April 1675 and Elizabeth’s on 17 April 1677. In both cases their father was named as John Sheldon, and the family’s abode as Perton, but their mother was not named at all. 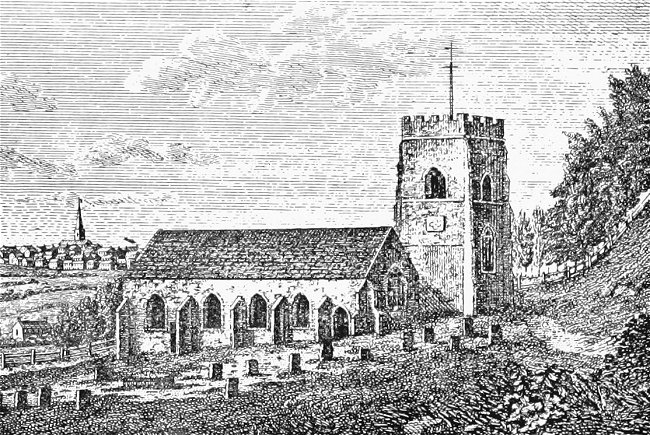 Just as Samuel Atcherley was not Elizabeth’s first husband, so Elizabeth Shelton was not Samuel Roycroft’s first wife. The registers of High Ercall show the baptisms of three daughters of “Samuelis Roycroft de More” (or Moore) and “Janae” his wife (the cleric at the time wrote in Latin): “Maria” in 1691, “Eleanora” in 1693 and Hannah in 1695. Sadly, the register entry following that for Hannah’s baptism recorded the burial of her mother – “Jana uxor Samuelis Roycroft de More”. Jane was interred on Christmas Day 1695. Beneath these two entries the page was signed by the vicar and both church wardens, one of whom was the grieving Samuel Roycroft. Samuel himself was buried some 12 years later, on 11 May 1708. He was “of the Moor” and, his baptism having been recorded in the High Ercall register on 15 March 1665-6, he was 43 years old.

Elizabeth Roycroft, nee Shelton, was at this point left a widow, and a stepmother. In the latter role I suspect she had a part to play in matching her stepdaughters with suitable husbands, and that in one case at least she may have networked with her relatives back in Staffordshire. I say this because the register of Wrockwardine, Shropshire, shows that on 5 July 1710 “Mrs Elinor Roycroft of the Moor Town in the parish of Ercall Magna” wed “Mr John Allen of Tetenhall in ye County of Stafford”. Following their marriage, John and Eleanor Allen lived and raised their own family at Moortown. And within four months of that wedding Elizabeth Roycroft became Samuel Atcherley’s wife and went to live with him at Roden.

The Allen family remained at Moortown for quite some time, the High Ercall parish register recording the baptisms of many Allen children whose abode was “the Moor” (and variations of that name). John and Eleanor’s eldest son Samuel Allen married Elizabeth Humphries at Longden on Tern on 8 January 1738, and when this couple’s second son Richard Allen married Sarah Juckes at High Ercall on 5 November 1773, one of the witnesses who signed the register was John Atcherley. John was almost certainly living at Moortown at the time and was therefore a neighbour of Richard Allen. Let’s find out how John, and his Atcherley descendants, came to live there.

Elizabeth Atcherley, formerly Roycroft, née Shelton, had spent her married life with Samuel Roycroft as a stepmother to three girls. After her marriage to Samuel Atcherley however, she gave birth to a child of her own. John Atcherley [

], Samuel and Elizabeth’s only child, was baptised on 15 March 1714-15 at High Ercall. Of this John Atcherley I know little beyond the following facts: he was married to Elizabeth Wood at Stoke upon Tern in Shropshire on 20 July 1736, and he was buried at High Ercall on 27 December 1750.

Thankfully, there is much more information available in respect of John’s wife Elizabeth Atcherley, née Wood [

], thanks to Brooke Robinson’s 1896 publication Genealogical memoirs of the family of Brooke Robinson of Dudley, together with the kindred families of Wood, Hector, Brooke, Persehouse, Saffery, and Johnson. The author gave the following excellent reasons for going into print: 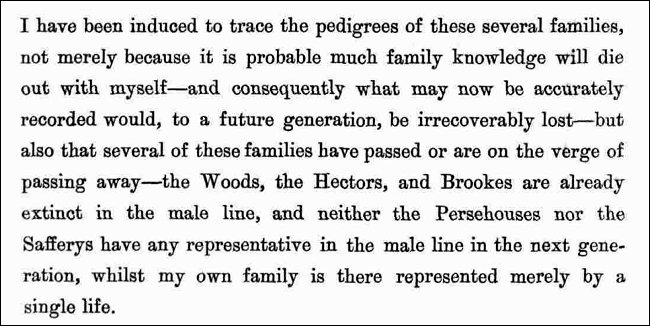 From Brooke Robinson we learn that Elizabeth was a daughter of Robert Wood of Rowton in the parish of Ercall Magna, who was in turn a son of William Wood:

WILLIAM WOOD, the son, at one period resident at Waters Upton, the adjacent parish to Rowton, but later at Rowton, his name as churchwarden in 1707 appearing on one of the church bells of High Ercall, died in April 1709, having married Elizabeth, sister to Thomas Adams of Newport, wheelwright, who after his death returned to Waters Upton, and by whom he left an only surviving son. ROBERT WOOD, this surviving son, in the earlier years of his life lived on a small property at Rowton, called the Cross Pavement. About 1718, however, he took the Moor Town Farm in High Ercall, on lease from the then Earl of Bradford; where he died in November, 1727. Administration being subsequently taken out in the Court of Lichfield; the value of his estate amounting to £660 1s. 1d., the lease of the farm being estimated at £150 value; the farmhouse comprising a hall, two parlours, kitchen, dairy and bakehouse, with five bed rooms over, a very fair house for the period.

The description of Robert Wood’s farmhouse at Moortown is a great find, for this was the future home of the Atcherley family. In a footnote, Brooke Robinson stated that “This house was taken down in 1844 and a new one erected in its place.”

Robert Wood, we are told, was married twice, and Elizabeth was borne of his second wife Margaret. Her baptismal entry in the High Ercall register reads: “Elisabeth daughter of Robert Wood Junr. of the Cross Pavement in Rowton & Margaret his wife was Baptized on the Twelfth day of March” in 1713-14. Elizabeth’s brother Thomas Wood took possession of the farm at Moortown. He married, but had no children.  Brooke Robinson provides the following transcription of Thomas’s gravestone at High Ercall:

HERE LIETH THE BODY OF
THOMAS WOOD
LATE OF THE MOOR TOWN
WHO DEPARTED THIS LIFE
JANUARY THE 4TH 1767
AGED 57 YEARS.

As for Elizabeth, we are provided with the following information:

ELIZABETH, the only surviving daughter of Robert Wood, married ——— Atcherley of a family long settled at High Ercall and the neighbouring parishes, who pre-deceased her, after his death residing with her brother, Thomas Wood, at the Moor Town, in the tenancy of which she succeeded him and where she has been successively followed by her son John Atcherley, her grandson Samuel Atcherley, her great grandson Robert Atcherley, and now by her great great grandson the present occupier, Mr. William Henry Atcherley, on her death being interred at High Ercall, where, on the northern side of the churchyard amidst various tombs of her husband’s family is a headstone inscribed:—

HERE LIES INTERRED THE BODY OF
ELIZABETH ATCHERLEY
OF THE MOOR
WHO DEPARTED THIS LIFE
THE 9TH DAY OF NOV. 1777
AGED 64 YEARS.

From this we can see that it was Elizabeth’s son John Atcherley who witnessed the marriage of his neighbour Richard Allen in 1773.

The transcript of the monumental inscription above, from a gravestone “amidst various tombs” of the Atcherley family buried at High Ercall prior to the 20th century, is unique. This is because the Atcherley gravestones and monuments familiar to Brooke Robinson were among the great many which were removed from the graveyard many years ago. The information they bore went with them into oblivion. The inscription for Elizabeth – the second of two Elizabeth Atcherleys who played a key role in establishing the Atcherley family at Moortown – is the only one for which a record remains. 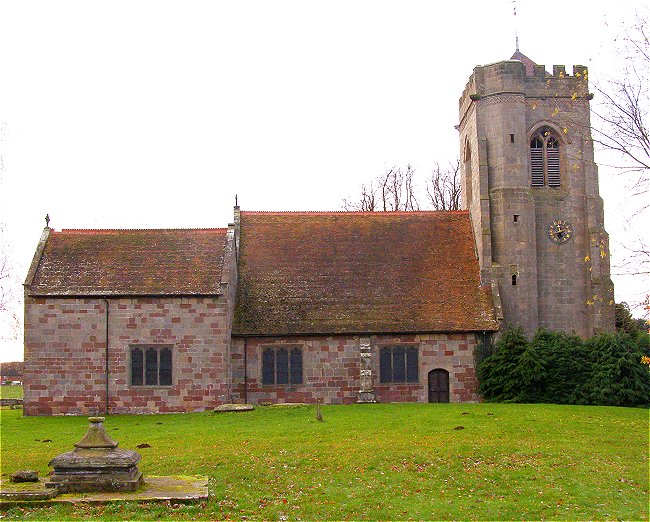 The church of St Mary & All Saints, High Ercall

Picture credits. Tettenhall church: from an illustration on page 97 of A History of the parish of Tettenhall, in the county of Stafford, taken from the British Library’s Flickr photostream; no known copyright restrictions. Extract from Genealogical memoirs of the family of Brooke Robinson of Dudley: from digital copy of the book, which was published in 1896 and is therefore out of copyright. The church of St Mary & All Saints, High Ercall:photo by the author.