“The panic of invasion had forcibly seized the imaginations of many persons. Government, willing to tranquillize the public mind, availed itself of every species of force to repel the threatened aggression.” So wrote Edward Pelham Brenton in his 1827 publication, The Naval History of Great Britain. The man behind the “panic of invasion” was Napoleon, Emperor of France. Among the many Britons who stepped forward to play their part in defending their country against Napoleon’s might was the Rev John Atcherley, an older brother of Captain James Atcherley of the Royal Marines.

] was baptised (at Shrewsbury St Mary) on 1 April 1771, he was probably born sometime in 1770, given that the baptism of his sister Arabella took place less than three months after his, on 18 June 1771. John was the third child and second son of the Rev James Atcherley, who in the year of John’s birth was promoted from second master to head master of Shrewsbury School (see The Rev James Atcherley, Head Master of Shrewsbury – Part 1). It seems very likely that John’s early education was received at his father’s school, but as the Shrewsbury school register was lost during James Atcherley’s headmastership, we will never know for sure.

The decision that John Atcherley would follow in the footsteps of his father (and indeed those of his older brother Roger) meant that John’s education was completed at St John’s College, Cambridge. He was admitted there at the age of 18 on 18 April 1789, and was awarded his BA in 1793. He was ordained as a deacon of the Diocese of Lichfield and Coventry on 2 February the following year, the ordination taking place at Tichfield Chapel in St Marylebone, Middlesex. His ordination as priest took place within the Diocese itself, at Eccleshall in Staffordshire, on 14 June 1795. 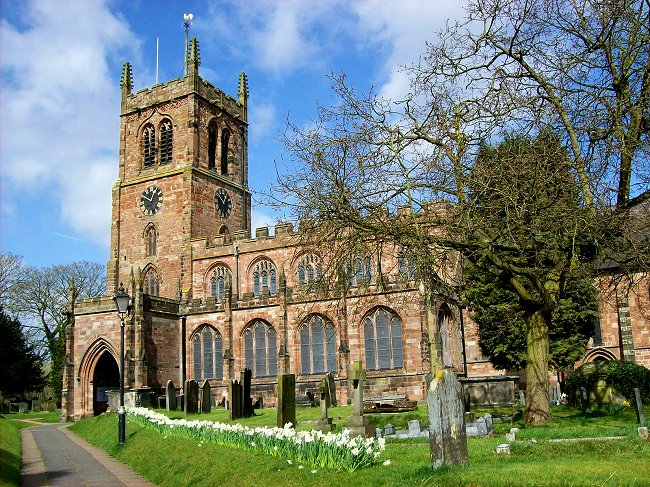 John’s clerical duties began in 1794, after his ordination as deacon. His first position, the curacy of Grinshill, seems to have been short-lived. The Grinshill marriage register shows that John conducted one wedding there, that of George Walford and Elizabeth Mullineux, on 3 March 1794. The next two marriage ceremonies, which were not carried out until January and February 1797, were performed by John’s father James Atcherley (who had been appointed Perpetual Curate of that parish in 1763). It is interesting to note that John signed the register on one other occasion, a few years before he was ordained: he was a witness to a wedding which took place at Grinshill on 27 December 1791.

From 1795, John Atcherley began to officiate at some of the marriages (and probably other services too) at the church where he had been baptised, Shrewsbury St Mary. His father James had done this from 1756 until 1781, and his brother Roger had conducted a wedding there in 1792. John’s first St Mary marriages, in his capacity as Assistant Minister, both took place on 21 May 1795. Others (one or two per year) followed from 1796 to 1798, with John adding the title Officiating Minster to his name on two occasions.

During this period – in 1796 to be precise – John Atcherley, “of School Lane, clerk”, was made a Burgess of Shrewsbury, as his father had been before him. I think it unlikely that he gained any practical benefits from this title, but it would have boosted his status.

Stapleton in Shropshire was the next parish where John Atcherley gained employment as a clergyman, although once more it appears that the work was quite limited, and of short duration. John conducted a few marriages there from 8 May 1796, up until 9 May 1798. It is interesting to note that the last wedding he performed at Shrewsbury St Mary took place on 8 May 1798. This was probably no coincidence, because 1798 was, according to the research of a later clergyman (Arthur Graham Kealy), the year when the Rev John Atcherley first became a Chaplain in the Royal Navy.

It appears (based on a request for information published in Notes and Queries in 1919) that the Rev Kealy found John’s records from 1798 while searching the Muster Books at the Public Records Office (now The National Archives) for his 1904 publication Chaplains of the Royal Navy, 1626-1903. Without access to a copy of Kealy’s book (and not having the resources to spend many hours searching TNA’s Muster Books) I don’t know which ship or ships John Atcherley served on. I therefore have little light to shed on John’s first naval appointment – other than to say that it took place during a period when Bibles, prayer books and men of God were strangers to the vast majority of Britain’s seamen.

The role of the naval chaplain is one which only came to the fore during John Atcherley’s lifetime, and particularly during the course of Britain’s wars with the French. The British Admiralty’s Regulations and Instructions had made provision for chaplains on board naval vessels from 1731, but (in the words of present-day academic Dr Gareth Atkins) “many captains displayed a pronounced disinclination to take clergymen on board”.  One of John Atcherley’s contemporaries, the Rev George Charles Smith, stated that during the war of the French Revolution, “darkness covered nearly the whole navy”. Smith maintained that during the first three years of his service in the Navy (from 1797 to 1800) he “never saw one copy of the Holy Scriptures” and he did not recall meeting “with one character who even pretended to fear or love God.”

Was it these very circumstances – which presented an opportunity to bring the word of God to ‘Godless’ men – that attracted John Atcherley to become a naval chaplain? Or did other factors play a part, such as a sense of patriotic duty (coupled perhaps with the example of John’s brother James, serving with the Royal Marines)? It seems unlikely that money or status would have been attractions, for the position of chaplain at that time offered little of either. To quote Atkins again, “Those few impoverished clerics who were prepared to brave the privations (and meagre pay) of shipboard life were frequently disregarded.” But what if John was one of those “few impoverished clerics”? Another author, B R Burg, has stated that “Often navy chaplains were men who could not secure appointments ashore.”

John’s reasons for becoming a naval chaplain are not the only subject for speculation – so too is the length of his initial period of service. I have found no records relating to the Rev John Atcherley between 1798 and the beginning of 1803, which suggests (but does not prove) that he continued to be a chaplain during that time. The records in which he then reappeared place him not only on dry land, but very far from the sea – though only for a limited time.

The entries relating to banns in the marriage register of Wednesbury St Bartholomew, Staffordshire, show that John Atcherley was curate of that parish from January 1803. He remained at Wednesbury until mid-September that year, and on his departure he left behind a community in which he felt welcome, and a young lady of whom he was particularly fond. Why? Well, the Navy called again, and John answered that call. The status of chaplains within the service was by now much improved (although Admiralty regulations would not include a job description until 1806). 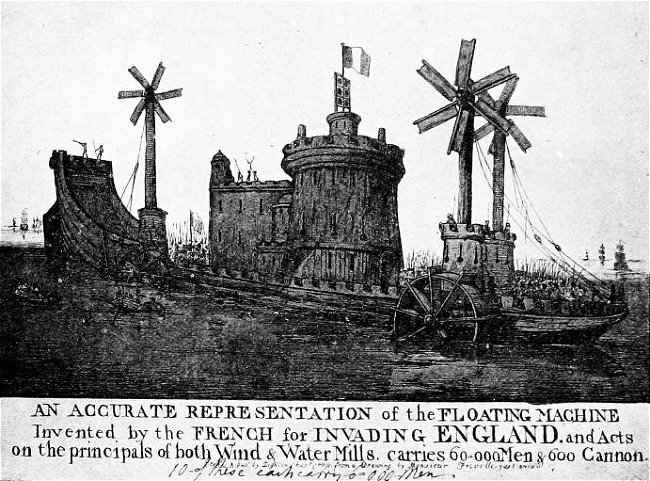 Furthermore, John’s curacy at Wednesbury had coincided with a period when fears of a French invasion were rife once more. Given the preparations which Napoleon was making, those fears were justified. The following passage is taken from Wheeler and Broadley’s Napoleon and the Invasion of England, the Story of the Great Terror:

In June, 1803, a definitive treaty between Holland and France was signed, and duly ratified the following month. The Batavian Republic was made responsible for the upkeep of 18,000 French soldiers and 16,000 of its own troops, but what was even more important at the time, it undertook to supply or build by December, 1803, at latest, five vessels-of-the-line, an equal number of frigates, fully armed and equipped, together with a sufficient number of transports for the embarkation of 25,000 men, including 9000 Dutch, and 2500 horses for the purpose of ‘a descent on England.’ One hundred chaloupes canonnieres and 250 flat-bottomed boats armed with from one to four guns and able to carry 36,000 men and 1,500 horses, were also requisitioned.

As Britain ramped up its preparations for Napoleon’s invasion, its newspapers carried details of military movements and naval news. The Norfolk Chronicle of 10 September 1803, for example, reported that “Lord Nelson has been joined by Sir Richard Bickerton’s squadron off Toulon, consisting of the Kent, Donegal, Gibraltar, Superb, Belleisle, Triumph, Renown, Agincourt, Monmouth, Medusa, Weazle, Termagant, Maidstone, Niger, and Raven.” It went on to say:

Gun-boats are to be stationed along the Coast, for the purpose of exercising the Sea Fencibles in firing, &c. The Sea Fencibles in the aggregate exceed 9,000 men.
Capt. D’Auvergne, (Prince of Bouillon) is appointed to the command of the Severn; Capt. Cunningham, to the Leopard; Capt. Rogers, to the Princess of Orange; Capt. Fane, to the Leander; Capt. Lyall, to the Driver sloop.
Rev. W. Morgan is appointed Chaplain to the Repulse; Rev. J. Atcherley, to the Princess of Orange; Rev. C. Seccombe, to the Prince George.
The number of ships in commission to the 1st instant, was, 87 of the line, 16 of 50 guns, 114 frigates, and 167 sloops, making a total of 393 ships of war. …

The Princess of Orange, to which John Atcherley was assigned, was a third rate ship of the line with 74 guns. Originally a Dutch vessel named the Washington, she had been captured by the British at the Texel (an island on the coast of Holland) in 1799. Ironically, it was to the Texel that the Princess of Orange returned in 1803, this time as part of Britain’s blockade of Channel and North Sea ports. There, she was part of a fleet commanded by Admiral Thornborough. On board, John would have taken services and preached sermons, he may also have visited the sick and assisted the surgeon, and in the event of a death at sea, he would most likely have conducted the burial service. 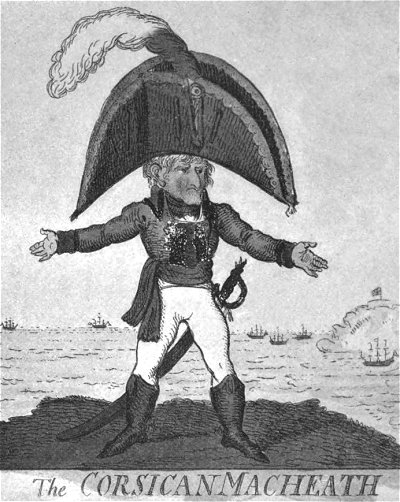 As 1803 drew to a close, our would-be invader Napoleon was faced not only by a British blockade, but also a shortage of ships of his own. According to Wheeler and Broadley: “The Batavian flotilla, as well as the Brest and the Texel squadrons, were specially backward, and as the navy was now to play an important part in the modus operandi, delay was inevitable.” (The image, left, is from a caricature entitled Bonaparte perplexed at England’s naval strength, September 16, 1803.)

Back home in Shropshire, John Atcherley’s father James passed away on 3 March 1804. One of the consequences for John was recorded in the register of the chapelry of Astley in Shropshire, on 16 December that year: “Revd. John Atcherley H.M.R.N. Succeeded his Father Revd. James Atcherley in this Curacy of Astley Being Nominated thereto by the Corporation of Shrewsbury”. This appointment led, indirectly, to John giving up his chaplaincy and returning to life on land. In John’s own words:

[On] being presented to a trifling piece of preferment near Shrewsbury, I had to pass through Wednesbury, and having been formerly Curate there, I was strongly solicited to return, and informed that Mr. Haden had written to me, stating how happy he should be to restore me to my former situation. This letter I believe was lost in the Romney, which ship had letters for the Princess of Orange, of which I was then Chaplain. To the desire of the inhabitants, as well as that of the Vicar of this place, I was induced to accede, not only from the flattering reception I was likely to meet with, but from an attachment to a young lady of that place. I wrote to the Admiralty for my discharge from his Majesty’s navy, and indeed attended there in person. When I obtained permission to return to the country, I came to Wednesbury, and informed Mr. Haden of my arrival, and that I was at liberty to take charge of his parish again.

Unfortunately for John, his decision to return to Wednesbury was one that he would soon come to regret.

> On to The Curate of Wednesbury and His Vicar – Part 1.