Following Sarah Atcherley’s life through her appearances in census records reveals a story which is fairly typical for a girl born into a family of farm labourers in the mid-1800s. After leaving school she went into service, later met and married a young man who worked as a servant in the same household,  and with her husband had four children.  But this is not Sarah’s full story, for the evidence indicates that in the years before her marriage Sarah had two other sons, both born out of wedlock.

] was born in the village of Admaston, which lies within the Shropshire parish of Wrockwardine and very close to the town of Wellington. The third child, and first daughter, of Thomas and Jane, she was baptised at the parish church (pictured below) on 26 March 1854. Her birth was registered in the second quarter of that year. 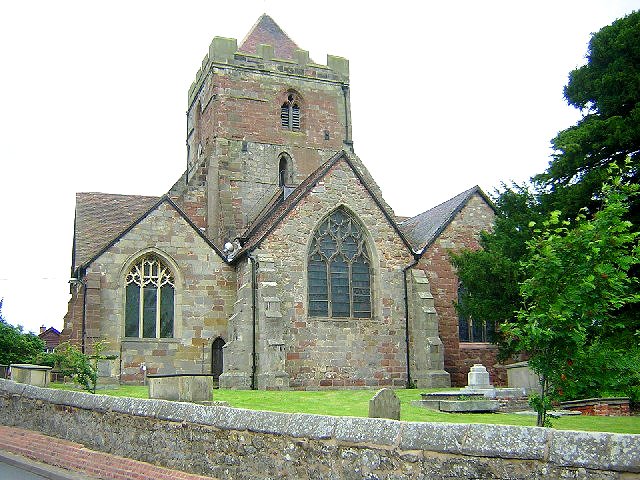 Seven years later the 1861 census recorded Sarah with her parents, siblings and her maternal grandmother Sarah Hussey, most likely still at Admaston, but certainly in Wrockwardine parish (the enumerator did not specify their address). Within six years of this census being taken however, in February 1867, Sarah’s father Thomas Atcherley died, probably at Eyton where he was buried. By 1871 Sarah’s mother, grandmother and four youngest brothers and sisters were living at the tiny hamlet of Tiddicross, to the west of Wrockwardine village. Sarah meanwhile was living some nine miles away in Eaton upon Tern, where she was employed as a nurse by farmer John Heatley, whose wife Emma had a one-year-old baby. Within the space of less than three years, Sarah would find herself even further away from home – and with a child of her own.

], son of Sarah Atcherley, was baptised at the church of St Michael in Ashton under Lyne, Lancashire. He had been born a little over three weeks earlier on 30 January. Neither the baptism register nor register of births named Arthur’s father. Sarah probably returned with Arthur to her native county later in 1874. Unmarried and almost certainly out of work, Sarah was in no position to bring her son up unaided and it is unlikely that her widowed mother was able to help. How was Arthur to be cared for?

The answer found by (or forced upon) Sarah is revealed by the 1881 census. This shows Arthur Atcherley living at 18 Barker Street in Shrewsbury as the adopted son of Irish labourer Thomas Burgess and his Shropshire-born wife Susan. Arthur’s age was given as 6 (he was actually 7) and his birthplace as Shrewsbury. Ten years later Arthur had taken the surname of his adoptive parents and was still living in Shrewsbury, with the widowed Susan Burgess. He married Louisa Connolley at Oswestry in 1900, where he established a business as a fishmonger. It seems unlikely that Sarah Atcherley, his biological mother, kept in contact.

A little over two years after Arthur’s birth Sarah was living in Camberwell, Surrey and was once again a single parent. The register of births for the Camberwell registration district in 1876 includes an entry for Albert [

], whose mother was Sarah Atcherley, a laundry maid of 69 Marlborough Road, off Old Kent Road. Albert was born at his mother’s abode on 29 July. As with the record of Arthur Atcherley’s birth, no father was named. (See extract below; click on the image to view a larger extract at Flickr.)

Albert Atcherley’s life was a short one. After suffering from “Spasm of Glottis” for four days, he died in the house where he was born, aged just 8 months, on 22 Feb 1877. He had been teething for three months and because this was regarded at that time as a cause of disease and death, “dentition” was also recorded as contributing to Albert’s demise. Although Albert was described as “Son of Sarah Atcherley A Domestic Servant” it was not Sarah who registered his death. The duty fell to another resident of 69 Marlborough Road, Eva J Branton, who was present when Albert died.  This begs questions which I doubt we can answer with any certainty. Was Sarah Atcherley present at her son’s death? Was she even still in Camberwell?

The censuses taken on either side of Albert’s birth and death (those of 1871 and 1881) show that 69 Marlborough Road in Camberwell was occupied by Charlotte Branton, a widow. In 1871 her occupation was recorded as ‘nurse’ and shared her home with three nurse children, aged 5, 3 and 1, in addition to a boarder, a lodger, a general domestic servant and two of her own sons. Her son William married Eva Julia Lane in 1876 – evidently the Eva J Branton who registered Albert Atcherley’s death the following year. By 1881 William and Eva had gone, but William’s brother Frederick was still at home with his mother (now described as a housekeeper), two lodgers, another brother named Archie, and three youngsters described as nephews – one of whom, Willie Wilcock, age 12, was clearly the 1-year-old nurse child Willie Wilcox who appeared on the 1871 census.

My reading of the facts relating to this unusual household is that Sarah Atcherley was more than likely lodging in the Branton household at the time of Albert’s birth with the intention of giving her son to Charlotte, so that Charlotte could nurse and rear him. This sounds, on the face of it, rather callous, but Sarah had (once again) found herself in a very difficult situation and I believe she tried to do the best for her unplanned child. We can only imagine how she felt, at the age of 23, after giving birth to two children and losing them both. Perhaps these events spurred her to move a long way from the places which had brought her so much unhappiness. Whatever the motivation for her long-distance relocation, she managed to secure work and accommodation at Crosswood near Aberystwyth in Cardiganshire, Wales (pictured below), the home of the Right Honourable Ernest Augustus Mallet Vaughan, fifth Earl of Lisburne. 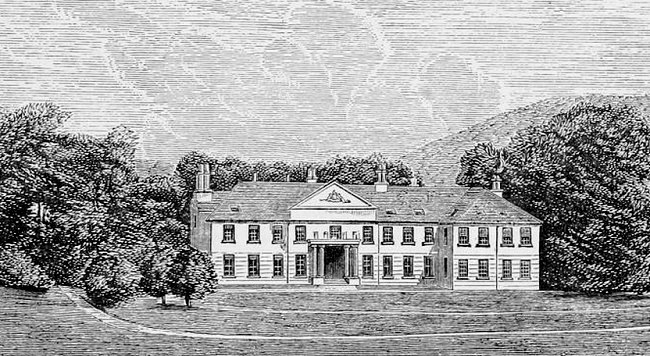 The romantic in me likes to know how, where and when the couples in my family trees met, so I was pleased when I found Sarah Atcherley, a servant, and her husband-to-be David Parry [

], a groom, both living and working at Crosswood (the Anglicised name for Trawscoed, or Trawsgoed) in the parish of Llanafan, on the 1881 census. The pair were wed the following year, on 1 March 1882, at the parish church of St Afan (pictured below). 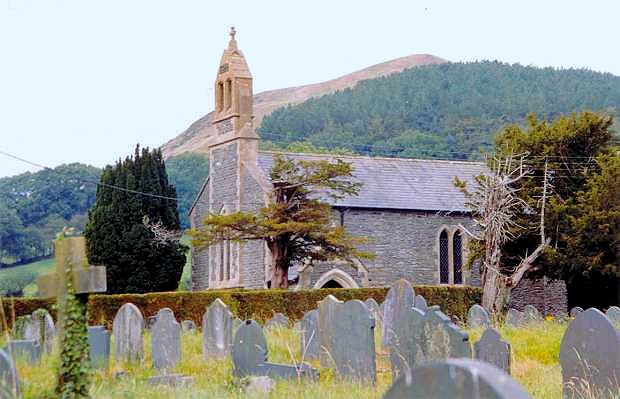 Sarah and David had in fact known each other for nearly four years at the time of their marriage, for their names appear in a report printed in the Cambrian News of 19 July 1878, as two of the servants who presented the newlywed Countess Lisburne with a gold locket on her arrival at Crosswood. It appears that after her previous misadventures, Sarah took her time before getting involved with another man!

], followed in 1886. Both David and Thomas appeared with Sarah on the 1891 census, when the family was living at Llwynderw in the parish of Llanilar, Cardiganshire. The head of the household, David Parry senior, was not at home on census night. Most likely he was away in the course of business, as I suspect that he was by this time a coachman, the occupation recorded for him when his and Sarah’s fourth child Henry Morgan Parry[

] was baptised on 24 May 1896. The family’s abode was by this time Northgate Street in Aberystwyth, which is almost certainly where Henry had been born, on 9 January that year.

David Parry’s work as a coachman, which in 1896 he was performing for the Lion Hotel in Aberystwyth, was not without danger. On the evening of 10 August that year, as he was driving his coach round a curve in the road, it collided with a smaller wagon. David and his three passengers were all thrown out, but fortunately two of the four were unhurt, and the other two – including David – suffered only minor injuries. Both coach and wagon were badly damaged. This accident does not appear to have affected David’s career as a coachman, as he was still in that occupation in 1901.

The 1901 census shows the Parry family at 28 Northgate Street in Aberystwyth, a street they remained in until at least 1904, when David Parry senior died there on 15 May at the age of 51. Notices of his death described him as an ostler. At some point after this, Sarah and at least two of her sons moved again, this time much further afield. The 1911 census records Sarah, by then aged 57, with Thomas and Henry Morgan Parry, at Ynyshir in the Rhondda Valley of Glamorganshire. Young Henry was a grocer’s apprentice, but Thomas was a coal miner, as were the two boarders living in the Parry household.

Following the fortunes of Sarah and her surviving Parry sons after 1911 has not been easy, their surname being rather more frequent than Atcherley. The only post-1911 record I have found which definitely relates is, sadly, that of the death of Sarah’s youngest son, Henry Morgan Parry. A Private in the Royal Army Medical Corps, Henry died in Belgium on 22 February 1919.

Of course, Parry was not the only surname to be carried by Sarah’s sons. Her first-born, Arthur, was given the surname Burgess by his adoptive parents. I don’t know where or when Sarah Parry, nee Atcherley, passed away, nor have found out what happened to her remaining sons David and Thomas. But I do know something that Sarah herself almost certainly did not, something that I hope would have pleased her if she had known: Through her son Arthur, she had four granddaughters, and at least four great grandchildren.

Footnote: It is just possible that the Sarah Atcherley named in the records relating to the births and baptisms of Arthur and Albert Atcherley (and the death of Albert) was the second cousin once removed of the subject of this story. However the other Sarah [

], born in 1853 and baptised at Eyton, a daughter of Henry Atcherley, was part of a more settled family and I have found no evidence to suggest she ever left Shropshire. Given that the marriage banns of George Pye and Sarah, daughter of Henry Atcherley, were being read in Kinnersley, Shropshire from 17 September 1876 and were followed soon after by that couple’s wedding I think there can be little doubt that Sarah, daughter of Thomas Atcherley, was the mother of Albert Atcherley, born 29 July that year. This, to me, makes the same Sarah ‘prime suspect’ when considering which of the two was Arthur’s mother.

Picture credits.Wrockwardine parish church, St Peter’s: © Copyright Tony Smith, taken from Geograph and adapted, re-used and made available for further re-use under a Creative Commons licence. Extract from GRO birth certificate for Albert Atcherley: Image posted in compliance with General Register Office copyright guidance. Trawscoed (Crosswood): from page 129 of Annals and Antiquities of the Counties and County Families of Wales, volume I, 1859; out of copyright. Parish Church of Llanafan & Trawsgoed: by John Ball, taken from his website Images of Wales, modified, and used under the terms set out on John’s website.