] was born in the Essex parish of Theydon Bois in 1870. His father and grandfather were both doctors, of science and medicine respectively, so I was somewhat surprised to find that Rowland, according to the 1901 census, was an actor!

Cottage at Theydon Bois, Essex, the parish where Rowland Hill Atcherley was born.

At first I thought that the information on the census was wrong. Surely Rowland was a doctor, but this had been written as ‘actor’ in error by the enumerator, most likely because everyone else of working age in the household was in the acting profession. Yet, when the 1911 census became available, this too showed that Rowland Atcherley was an actor. (It also showed that his mother-in-law was still living with Rowland, Florence and Phyllis, but was now known as Minnie Poole rather than Meta Pelham).

My attempts to find out more about Rowland Atcherley’s acting career initially drew a blank. I could find nothing at all relating to this aspect of his life. I did however, quite by chance, find details of his marriage to Florence Bertha Rose Poole – in New Zealand in 1898. This information, in conjunction with the 1901 and 1911 census records, suggested that the Poole family had adopted the surname Pelham as a ‘stage name.’

It was my discovery of Rowland Atcherley’s own stage name that finally provided the key which gave me access to more than two decades’ worth of information about Rowland’s career in the theatre. This information came to light thanks to the National Library of Australia’s wonderful online archive of digitised historic newspapers Australian Newspapers Online (part of the Trove website). An entry in the Marriages column of the Melbourne Argus, published on 26 May 1898, reads as follows:

Armed with this information, further searches of the Australian Newspapers Online site, along with New Zealand’s Papers Past, the archives of The Stage magazine, and a few other online sources, have enabled me to piece together the story of Rowland Hill Atcherley’s stage career. 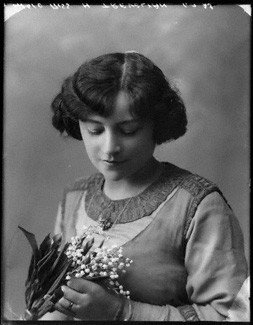 earliest stage performance I know of which may have featured Rowland Hill Atcherley was a smoking concert at the Minor Lyric Hall, Hammersmith, on 6 April 1889. The list of contributors to the programme listed in The Primrose League Gazette included a Mr R M Atcherley – this could very well have been in error for R H Atcherley. Rowland, although he was then 18, was far from being the youngest actor that evening – that title went Hilda Trevelyan, who was said to be 9 years old. Hilda (pictured right, when older) became best known for playing the role of Wendy in the original production of J M Barrie’s Peter Pan.

As for Rowland, the next stage production which I can say with certainty he took part in was reviewed in The Era of 11 May 1895:

After listing the cast, The Era’s correspondent wrote: “This burlesque, if at times uneven, possesses some smart lines and certainly some clever songs satirising the principal topics of the day.” One of the best musical numbers was said to be “a taking song of the Lord Privy Seal, capitally sung by Mr. R. H. Atcherley”.

Although I have not found Rowland on the 1891 census, his family were living in Richmond at that time, so the Theatre Royal was quite possibly Rowland’s local playhouse. He returned there in August 1895, appearing in The Story of a Sin, a drama written by Courtenay Thorpe. According to The Era, the first performance was “a decided success” with “the small part of the footman being done full justice to by Mr Rowland Atcherley.”

Moving onwards and upwards, in September 1895 Rowland became part of Mr Stanley Hope’s company of actors and began touring with them for 8 months or more, appearing in the comedy drama Sowing the Wind. Reviews in The Stage along with newspaper advertisements and reports show that Sowing the Wind was performed, after a long and successful run at the Comedy Theatre in London, at various provincial theatres.

Rowland was now using his stage name, and the first performance of Sowing the Wind which included George Rowlands on the bill was at the Opera House in Northampton. Thereafter he appeared in the play at venues including Torquay (Royal), Cheltenham (Theatre and Opera House), Great Yarmouth (Royal Aquarium), Stratford (Theatre Royal), London (The Parkhurst), Sheffield (City), Ealing (The Lyric), Swansea (New Theatre and Star Opera House), Blackpool (Opera House), Northampton (Opera House; a return visit) and finally South Shields (Royal) in May 1896. 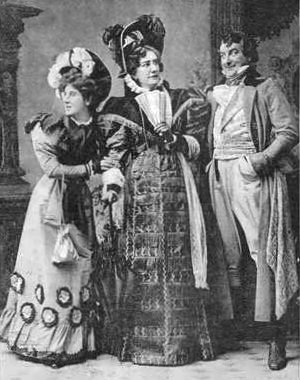 irst role taken by Rowland in Sowing the Wind was that of ‘fashionable attorney’ Mr Deakin, although at Great Yarmouth he played Annersley and was named in The Stage’s review not as George Rowlands but as Mr Atcherley. Later he switched to the part of Sir Richard Cursitor (the image, right, shows another actor in that role, with the characters Maud Fretwell and the Hon. Mrs Fretwell, in 1893). Rowland received favourable reviews throughout the play’s run, and I am sure he would have been pleased to read the likes of those which opined that he was “excellent,” “capital,” and deserved “great praise.”

After his success in Sowing the Wind, Rowland moved from a comedy drama to a “farcical and musical comedy”: he was listed among the cast appearing in Skipped by the Light of the Moon at the County Theatre, Reading, during August and September 1896. By a strange coincidence which would soon become apparent to him, Rowland played the character Frank Pelham. In all probability this was the last role he played in England for a while, for within weeks of his appearance at Reading he had embarked on a journey to the other side of the world, where his talent for farce and comedy would be further developed with the renowned Frank Thornton and his English Comedy Company.

Frank Thornton, an actor, comedian, singer and producer, had toured Australia and New Zealand before and this return visit was no doubt eagerly anticipated by theatre-goers. In New Zealand, the Auckland Star newspaper reported on 31 Nov 1896 that: “Mr Frank Thornton sails again for Australia, per Orizaba, on Oct. 30, taking with him a repertoire consisting of ‘Charley’s Aunt,’ ‘Mamma,’ ‘The Private Secretary,’ ‘The Bookmaker,’ ‘The Strange Adventures of Miss Brown,’ and ‘Sweet Lavender.’”

Sure enough, the passenger list for the Orizaba (pictured below), which actually departed from London on 29 Oct 1896, included the following, who were all contracted to land at Melbourne: Mr F Thornton, Mr F Shepherd, Mr H Terry, Mr Heath, Mrs Heath, Miss N Seabrooke, Miss E Carew, and of course Mr G Rowlands, a.k.a. Rowland Hill Atcherley. Rowland was setting off on a voyage at the end of which he would win not only praise from theatre critics, but also the heart of one of his fellow actors. 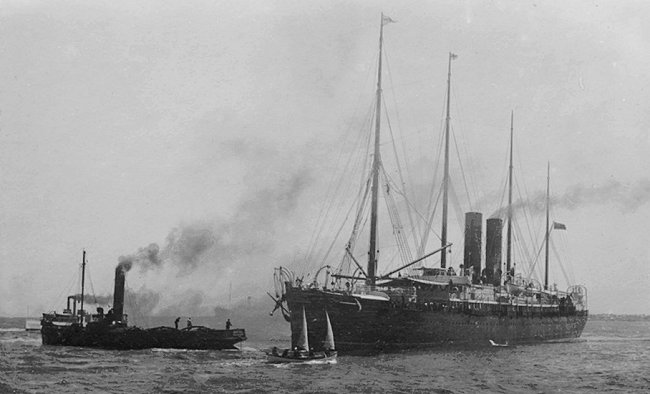