< Back to The Anglo-French ancestry of Ann Compton Atcherley or Rowland Atcherley, M.D.

The marriage of Rowland Atcherley [

] was sadly shortlived, brought to an end after just five years by Rowland’s untimely death. Three years later, Ann’s father Andrew du Moulin passed away too. Following Andrew’s decease Ann stood to benefit not only from his will, but also from the will of his aunt, Lady Mannock. Matters were not quite that straightforward however. Ann, finding herself in dispute with her brother over the payment of her inheritance, took that dispute to the High Court of Chancery. 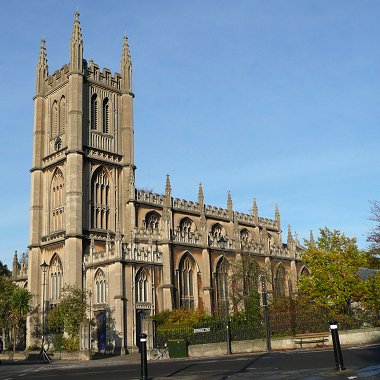 In my story about Ann’s first husband, I asked “What led Rowland junior to be the first of the Atcherleys to become a physician?” The question with which I’m going to start this story is: how did Anne du Moulin and Rowland Atcherley get together? One possibility is that Rowland became the du Moulins’ family doctor when they moved back to Bath in the 1840s. Rowland lived in Bathwick (across the river from ‘Bath proper’) and so did the du Moulins, so Rowland would have been the logical choice if a member of the family needed medical attention. I like to think that after meeting in this way, and forming a bond of mutual attraction, love blossomed and led Ann and Rowland to the altar at Bathwick St Mary (pictured above).

However the couple met, it seems that they were already on intimate terms some time before their marriage and it was perhaps necessity which led to their wedding. Rowland tied the knot with Ann on 13 January 1846, and the couple’s first child Ann Isabella [

] was born on 3 July that year. The birth took place a long way from Bath, at Victoria Place in Frogmore Ward, Abergavenny. Did Ann and Rowland get out of Bath (so to speak) in order to avoid the potential embarrassment which might have arisen when the local gentry became aware of this otherwise happy event occurring within six months of the wedding?

Here’s another question: did Ann and Rowland ever return to live in Bath after their move to Abergavenny? The Bath Directory for 1846 included “Atcherley Rowland, M.D., 19 Pulteney street”. Membership lists for the Provincial Medical and Surgical Association (PMSA) also included “Atcherley, Rowland, M.D., Bath” in 1846, and in 1847 too – but was the 1847 list up to date? Probably not, as Ann Isabella Atcherley was baptised at Plymouth St Andrew in Devon on 5 February 1847, and the record of this event shows that the family was then residing in Gibbons Street.

I have not found a PMSA membership list printed in 1848, but in 1849 and 1850 the were lists with entries for “Atcherley, Rowland, M.D., (late of Bath.)” (my italics). The 1850 edition of the History, Gazetteer & Directory of Devon placed Rowland at Shaldon – which is where Ann and Rowland’s two sons Rowland John [

] were born in 1848 and 1850 respectively. I think it likely therefore that Ann and Rowland left Bath in 1846 and did not return, other than for occasional visits to Ann’s parents Andrew and Eliza du Moulin.

The 1851 census records Ann Atcherley making just such a visit, but in tragic circumstances – Rowland had passed away just three weeks before that census was taken. Ann must have been glad of her family’s support at that time. Along with her father and mother at 104 New Sydney Place was her younger sister Josephine; completing the “Du Molin” household were three house servants – and Ann’s 4-year-old daughter, Ann Isabella Atcherley.

Where were the widowed Ann’s two sons though? Rowland John Atcherley, then aged 3, was in the care of his maternal aunts Caroline and Charlotte, and his grandmother Eliza Atcherley, at Mile End Cottage in Highweek, Devon. Of Henry Oliver Atcherley, Ann’s youngest child at less than a year old, I have found no trace on the 1851 census. Whether he was with his mother in Bath or his aunts in Highweek, it looks like he was somehow missed from the census schedule.

It appears that after visiting Bath, Ann returned to her home at Shaldon and continued to live there for another two or three years at least; in an 1852-53 Slater’s Directory covering Devon she was listed among the village’s Nobility, Gentry and clergy. In the end though, she bounced back to Bath. My guess is that her return was prompted by another death – that of her father Andrew du Moulin on 4 July 1854 – or perhaps the period of ill health which may have preceded it. In his will, dated 8 November 1849, Andrew had directed that his funeral should be “plain and unostentatious, and conducted with as little expense as circumstances will admit of.” He was buried in the cemetery of Bath Abbey (pictured below) on 11 July, one week after his passing. 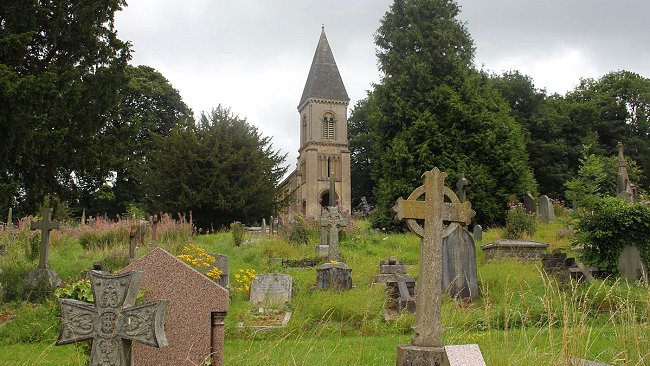 Naturally, Andrew du Moulin’s will also made provision for his wife and his surviving children (with the exception of Anastasia, who had married Hyppolite Pourvendier and was still alive at that time – she was not mentioned at all in Andrew’s will). He gave portraits of himself and of his parents to his son Nicholas (where are those paintings now I wonder?), along with a tin box of private papers, two more tin boxes of documents from an aunt and an uncle, and four plated side dishes and covers. Nicholas, “being already sufficiently provided for”, was bequeathed nothing else. Daughter Ann was to receive Andrew’s gold watch and chain. Everything else was to go to Andrew’s widow Eliza, but with one proviso and one suggestion.

The proviso related to Andrew’s rosewood piano, which Eliza was to have the use of during her life, after which it was to be given to Ann. The suggestion was with regard to what Eliza should give from her inheritance to daughters Ann and Josephine. Andrew had “entire confidence in her affection for [the couple’s] children [and had] no doubt she [would] make a proper and suitable division of the property between [their] two daughters.” He went on to say: “I would suggest to my said wife that in disposing of the property between my said two daughters it would be desirable to give the said daughter Ann Atcherly two thirds thereof, in consequence of her being married and having children, and to limit the said shares to the separate use of our two daughters.”

Andrew’s death brought into effect not only his own will (once proved), but also a bequest in the will of his late aunt, Lady Mannock (who died some 40 years before Andrew, on 17 April 1814). This bequest was summarised (in part) as follows in 1855:

LADY MANNOCK, by her will dated the 7th of February, 1814, directed that the sum of 2500l. £5 per cent. Bank Annuities should, within the space of six calendar months after her death, be purchased or transferred out of her personal estate, and invested in the name of her trustees Selby and Wright, who should stand possessed thereof, upon trust for all and every the daughter and daughters of Andrew Du Moulin living at the time of his decease who should attain the age of twenty-one years or marry, to be divided amongst them in equal shares; […]

There was more to Lady Mannock’s bequest than this of course, but in essence it was straightforward – even if it did mean that her Ladyship’s great-nieces had to wait a very long time for their money thanks to Andrew du Moulin’s longevity! Two of them had in fact predeceased Andrew, leaving just Ann Atcherley and Josephine du Moulin to collect. Except that there was, in Ann’s case, a complication – the marriage settlement which was drawn up the day before she and Rowland Atcherley took their vows.

It was known at that time that Ann would inherit a large sum of money on the death of her father. It was also known that under the law of coverture this would then belong to her intended husband (see Atcherleys reunited for more on coverture). The purpose of Ann and Rowland’s marriage settlement was therefore to ensure that when the money due to Ann under Lady Mannock’s will became payable, it would be under Ann’s control.

To achieve this, within their marriage settlement Ann and Rowland covenanted with Nicholas Selby du Moulin (Ann’s brother) and Edward Norris that if, after their marriage:

the said R. Atcherley and Anne Du Moulin, or either of them in her right, should at any time or times during the said intended coverture be or become entitled by gift, devise, bequest, descent, or otherwise howsoever, to any personal estate of the value or amount of 100l. or upwards, at any one time (other than and except interests which should be restricted to the life of the Plaintiff, or which, whether so restricted or not, should be settled and limited to her separate use and disposal) then and in every such case the same should be forthwith vested in the said Nicholas Selby Du Moulin and Edward Norris […] upon trust to convert and get in the same, and to stand possessed of the money to arise from such personal estate, upon trust to invest the same in the public stocks or funds of the United Kingdom, or at interest upon real securities, and to stand possessed of the said stocks, funds, and securities, upon trust to pay the interest, dividends, and annual produce thereof to such person or persons, and for such intents and purposes as the said Anne Du Moulin, notwithstanding her being under coverture, should by any writing under her hand from time to time, when and as the same should become due and payable […]

This arrangement meant that Ann would have an independent income at her disposal once she became entitled to her great aunt’s legacy, for the duration of her marriage to Rowland Atcherley. As we have seen though, because of Rowland’s early demise that marriage only lasted for five years, and the money due to Ann under the terms of Lady Mannock’s will did not become payable until Ann was a widow. What happened next was this: “Nicholas Selby Du Moulin and Edward Norris received Anne Atcherley’s share of the 2500l. and the residue under Lady Mannock’s will, and invested the same in the purchase of 1955l. 15s 9d. Bank £3 per cent. Annuities.” 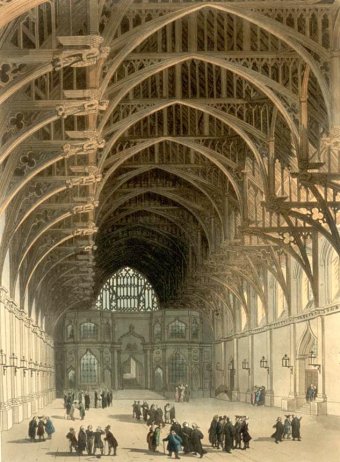 A disagreement then arose as to whether or not the sum received and invested by Nicholas du Moulin and Edward Norris on trust for Ann was actually subject to the covenant in her marriage settlement. If it did not, then the money belonged solely to Ann herself. Eventually the matter ended up before England’s highest court of equity, which had the power “to provide remedies not obtainable in the courts of common law.”

The case of Atcheley v. Du Moulin was heard by the High Court of Chancery in Westminster Hall (the interior of which is pictured left as it appeared in 1810) on 14 December 1855. The recorded summary of the facts submitted to the court (from which I have drawn much of the information contained in the last several paragraphs) was considered, and legal opinion put forward on behalf of the plaintiff (Ann) and the Defendants (her brother Nicholas, and Edward Norris). Vice Chancellor Sir William Page Wood delivered his judgement the next day. The judgement was detailed, but the key findings were (thankfully) set out in brief at the beginning of the official report of the case. In a nutshell, Ann’s interest in Lady Maddock’s legacy was not within the covenant in her marriage settlement.

I am not legally trained, but I believe the above judgement meant that Ann Atcherley won her case! She was now a wealthy widow, with the means to support herself and her children. She would not remain a widow for long however. On 12 April 1856, a little under four months after her victory in Chancery, Ann Compton Atcherley, née du Moulin, married Camille Casimir Breton at the church of St James in Bath.

> On to Camille Casimir Breton and Ann Compton Atcherley: The French connection.