< Back to Thomas Atcherley and his Marton tannery.

Thomas Acherley […] had two sons—Thomas, the second of that name, and Richard,—hee had also two daughters. After the death of his first wife hee married the widow of Nicholas Gough of Wolverley, a very wealthy widow. Hee went to live with her att Wolverley, and gave his lands in Marton to his eldest son Thomas, who marryed Elinor, the Sister of Roger Griffiths, an eminent Alderman in Shrewsbury; and this Roger Griffiths likewise marryed Mary the oldest sister of this Thomas Acherley. The younger daughter was married to one Simcocks, a mercer in Whitchurch. Richard, the younger son, was marryed at Wolverley, and dyed about myddle age.

— Richard Gough (1701), Antiquities and Memoirs of the Parish of Myddle. 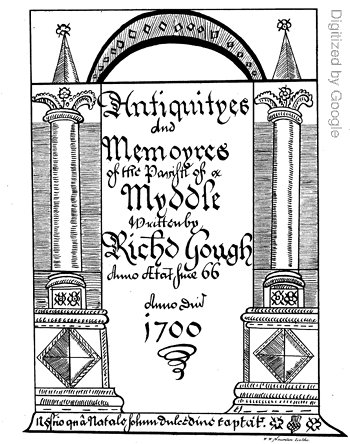 Having examined Thomas Atcherley’s life as a tanner and gentleman, I will now look at his place in the Atcherley family tree. It has to be said that the twigs and branches here are a little tangled. Richard Gough wrote that Thomas was the son of Richard Atcherley of “Stanwardine in the Feilds”, and went on to give the above account of his wives, and of his children born in wedlock. As I advised in the first part of Thomas’s story however, “[the] information provided by Gough […] does have to be treated with some caution”. There are certainly some factual errors in the above extract from Gough’s Memoirs. The same is true of some of the writings (and online family trees) relating to Thomas which have been compiled by others. Let’s see if we can untangle fact from fiction, or at least separate the most likely from the improbable.

It appears that Thomas Atcherley’s first spouse was a lady by the name of Elizabeth. Although no record of Thomas and Elizabeth’s marriage has been found (so I don’t have a maiden surname for her), the couple had a child: “Thomae Atcherley [filius] Thomae Atcherley de Marton tanner et Elizabethae uxo:” was baptised at Myddle St Peter on 31 December 1609. “Elizabethae uxor Tho Atcherley de Marton Tanner” was then buried at Myddle on 15 Jun 1612. Richard Gough, despite his familiarity with Marton’s Atcherleys in the latter part of the 1600s, may not have been aware of her.

More than one family tree at Ancestry gives Elizabeth the maiden surname Heywood, but with no clue as to source of this information. I should add that those same trees give Elizabeth’s husband Thomas Atcherley a birth year of 1580 and show the couple having a son, Richard, born in 1587 – when Thomas would have been just seven years old! Copying of dubious ‘facts’ from other family trees without regard for sources or logic is unfortunately all too commonly seen in Ancestry member trees (and elsewhere).

Thomas’s second spouse – the first and only one for whom a marriage record is known – was Jane Hinks (or Hincks). The wedding took place at Myddle St Peter on 17 November 1612, just five months after the burial of Thomas’s first wife, Elizabeth, at the same church. Rather a hasty match, you may feel, but Thomas senior may have been thinking about Thomas junior, who would then have been about 3 years old – if he was still alive (I will return to the possible fate of this Thomas junior very shortly).

Jane Hinks was of Burlton, in the parish of Loppington, at the time of her marriage. I think it likely that she was born there. She was, I believe, the Jane Hincks who was baptised at Loppington St Michael & All Angels on 20 July 1589, her father identified in the register as Edward Hincks while the mother who brought her into the world was sadly omitted from the record. She was however named – as Marie – in Edward’s will dated 5 May 1611 (and proved on the 27th of that month). Jane and her brothers Richard, George and John also appeared in Edward’s will.

Why am I uncertain about this second Thomas Atcherley junior? Because of Thomas Atcherley senior’s extra-marital liaison with one of the daughters of a man who was known to Richard Gough as ‘Old Edge’. I wrote some time ago about the result of that liaison, in Edge of the tree no longer: Thomas Atcherley, alias Edge. In that story, I noted:

The registers of Myddle show two baptisms in the early 1600s for sons named after their father, Thomas Atcherley of Marton, tanner. The first was on 31 December 1609, and the second was on 5 January 1616/17. There is no record of a burial for the first Thomas, so it would appear that the second baptism was that of “Thomas Acherley Edge” (even though the register appears to show that he was the son of Thomas Atcherley and his second wife, Jane).

Thomas Atcherley’s spouses and children – based on the conclusions above.

I speculated earlier that the Thomas who was baptised at the end of 1609 may have been the reason for the hastiness of his father’s second marriage. However it could be that he died as a youngster – before or after that second marriage – without his burial being recorded (entirely possible, as I have found no burial or other records for his sister Eliza Atcherley, mentioned above, after her baptism in 1615). If that was so, and if the Thomas baptised towards the end of 1616/17 was born in wedlock to Thomas senior and Jane, then the baptism of a third Thomas Atcherley junior, born out of wedlock to the daughter of Old Edge, was not recorded in the parish register – despite the ceremony being the talk of the village!

Some people have followed this line of reasoning. One of those who did so was local historian David Hey, who in 1974 wrote of Thomas Atcherley senior: “After the death of his wife, Elizabeth, and their son, Thomas, he married Jane Hinks of near-by Burlton, who bore him two sons and three daughters. He also had an illegitimate son by Edge’s daughter in Marton.” On the other hand the Burkes, in their of 1847, wrote: “Thomas Atcherley, the eldest son of Richard Atcherley, added certain parts of the Marton property in 1611 , 9 James I., and purchased more in 1620; and upon his death was s. by his eldest son, Thomas Atcherley, who was bapt. 31 Dec. 1609 […]”.

Absolute proof in genealogy can be hard to come by, and in this case more than one interpretation of the available evidence is possible. I have chosen to go with the Burkes, but David Hey’s conclusion is just as valid. Perhaps, in the end, it does not matter too much. Thomas Atcherley had two sons born in the early 1600s who shared his name and grew up to have children of their own – these facts are not changed by our inability to attribute baptism records to each of those sons with 100% certainty. What I’m most miffed about is not having more information about the Edge family!

And so we come to Thomas Atcherley’s fourth and last ‘significant other’, “the widow of Nicholas Gough of Wolverley, a very wealthy widow.” Who was she? I have found no record of her marriage to Thomas Atcherley, but from her burial record, and from her will, we know that this lady’s first name was Anne. My searches have also failed to uncover any evidence of her marriage to Nicholas Gough. Was Anne really a widow as stated by Richard Gough (who was probably a relative of Nicholas and therefore, perhaps, in a position to know)? Perhaps not.

FamilySearch has indexed the baptism of Anne, daughter of Nicholas Gough, at Loppington on 5 April 1590 – which suggests the possibility that the Ann(e) Gough who wed Thomas Atcherley may have been a rich heiress rather than a wealthy widow.

Staffordshire and Stoke on Trent Archives holds the will of a Nicholas Gough, yeoman of Loppington, which was proved in 1633. In theory this is available online at Findmypast, but unfortunately FMP have made a real mess of putting some of the wills for that period online and have mixed up different pages from different wills (and missed out a number of pages too). All I am able to see is the inventory and list of debts owing to Nicholas Gough. In money alone he had £400 to his name, which was quite a sum back then. If the Anne Gough who married Thomas Atcherley was the widow or the unmarried daughter of this Nicholas Gough, then it seems likely she was indeed a woman of some wealth.

“Anne Atcherley of Wolverley widdow” was buried at Loppington on 27 November 1660. She left no will, but a letter of administration was granted to Dorothy Newnes who had to swear that “Anne Atcherley [your] late Kinswoman deceased died intestate not making any will so farre as you know or believe”, and that she would “faithfully administer the same by paying her debts” so far as she was bound by law. She was most likely the Dorothy France who wed “William Newons” at Loppington on 3 May 1636.

“Dorothy ye Wife of William Newnes of Northwood” was buried at Loppington on 17 June 1661, having died without completing the administration of Anne Atcherley’s estate. The task of finishing this work fell, in 1663, to “Humfrey Gough next Kinsman of Anne Atcherley late of Wolverley”. That gives us two relatives of Anne, but whether their kinship was through blood or marriage I have yet to determine.

Although Anne Atcherley, formerly Gough, did not leave a will, her husband Thomas Atcherley of Marton and Wolverley did. That document, in conjunction with other wills and records, helps us to learn about the fates of Thomas’s children – and possibly even to identify his siblings.

Picture credits: Frontispiece of Richard Gough’s Antiquityes and Memoyres of the Parish of Myddle, 1895 edition: From Google Books digitised edition, original image out of copyright. Family tree diagrams: By the author.