The Battle of the Ancre – the last major British attack of the First Battle of the Somme – began on 13 November 1916. Fought by the Fifth Army against the German First Army, the offensive was regarded as a success for the Allies: Beaumont Hamel and Beaucourt were taken, four German divisions had to be relieved because of the number of casualties they suffered, and 7,000 German prisoners were taken. Not all British objectives were achieved however. In chaotic conditions at the northern end of the battle front the Third Division gained little, at a cost of 2,000 casualties. One of those wounded, on the first day of the battle, was my great uncle, John Atcherley [

The gunshot wound which John received on 13 November 1916 was not the first inflicted upon him during the Great War – he was in fact hospitalised within months of Britain’s entry into the conflict. Unlike his brother Henry Atcherley (see Henry Atcherley’s World War One), John had joined the army before the outbreak of hostilities and so was fighting in France in 1914.

I learned of these facts not from John’s service or pension records (which did not survive the Blitz of World War 2), but from a feature in the Wellington Journal of 26 Dec 1914. A page of photographs and mini-biographies of local men serving their country included, from Newport, John and his cousin Samuel (see Samuel Atcherley’s World War One). With regard to John, the paper reported: “Private J. Atcherley … joined the army in 1913, and was stationed at Tipperary until the outbreak of war. He is now lying in hospital wounded.”

Because of John’s early entry into the war, his Medal Rolls Index Card shows that he was awarded not only the Victory and British medals but also the 1914 Star with Clasp and Roses. (Examples of these three medals, known as Pip, Squeak and Wilfred, are shown in the image below, but without the clasp and roses on ‘Wilfred’.) The same card shows that John served as a Private and Corporal with the First Battalion of the King’s Shropshire Light Infantry, entered an unspecified theatre of war on 2 November 1914 and that his service number was 10339. 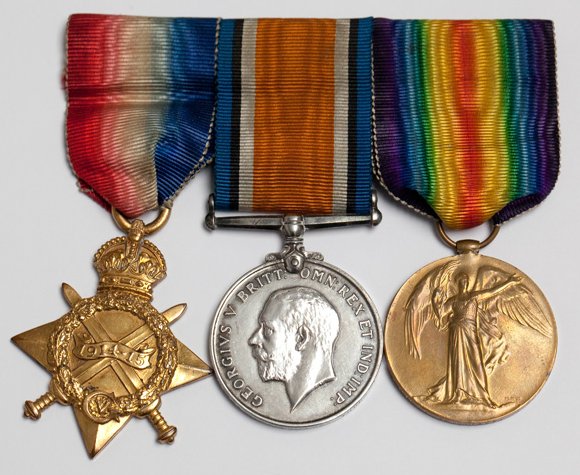 A search of surviving service/pension records for men of the KSLI with similar service numbers flags up 10333 Charles Henry Clee of Much Wenlock. Charles attested at Shrewsbury on 15 October 1913, and formally joined the 1 Battalion KSLI at Tipperary, in Ireland, two days later. I think it is likely that if John Atcherley’s own records had not been burnt in the Second World War, they would show these same details. If so, this would mean that John had only just turned 16 when he joined up – perhaps in search of something more interesting than local farm labouring work.

Britain’s declaration of war on 4 August 1914 was followed later that day by mobilisation orders for 1 Battalion KSLI, part of the 16th Infantry Brigade, 6th Division. The Battalion left Tipperary for Queenstown on 14 August and within four days was encamped near Cambridge, where training took place. Embarkation at Southampton followed on 8 September, two days later 1 Battalion KSLI disembarked at the French port of St Nazaire.

As we have seen from his Medal Rolls Index Card, John Atcherley did not enter France with the rest of 1 Battalion in September 1914. Instead, for reasons that are unknown to me, he arrived on 2 November. Perhaps he was one of the 68 men who, with Captain Harrop, joined the Battalion at Rue du Bois (south of Armentières) on the evening of the 6th; alternatively he may he been one of the “74 Rank & File” who arrived, with Captain Prince, two days later.

Given that John was reported to be “lying in hospital wounded” as of 26 December 1914, this leaves a fairly narrow range of dates when he might have received his wounds. This is not enough to say with any certainty how and when he was injured however. The war diary of 1 Battalion KSLI recorded casualties on most of the days immediately following John’s probable arrival, with enemy sniper fire and shelling taking their toll. The German attack on Ypres was underway, and the battalion was part of what Lord French described as the “thin and straggling line of tired-out British soldiers [which] stood between the Empire and its practical ruin as an independent first-class Power.”

1 Battalion was relieved by the Durham Light Infantry on 14 November and went into billets, before returning to the trenches at Flamingerie Farm on the 24th. The weather by this time was particularly cold and wet, and ‘trench foot’ began to have a greater effect on the men than enemy fire. Rotation between trenches and billets continued, with 1 Battalion in the latter for Christmas – while John Atcherley was in hospital.

John was by this time serving with the 7th (Service) Battalion of the KSLI. This Battalion had been formed in September 1914, and entered France at Boulogne a year later. During 1916, as part of the 8th Brigade of the 3rd Division, 7 Battalion KSLI took part in the actions of the Bluff and St Eloi Craters, the Battles of Albert, Bazentin, and Delville Wood, and finally, the Battle of the Ancre.

A short description of the 3rd Division’s part in this battle, which was preceded by 7 days of artillery bombardment, is given by Wikipedia:

The 3rd Division attacked Serre with two brigades, the 8th Brigade on the right using all four battalions and the 76th Brigade on the left attacking with two battalions and two in support, with 36 machine-guns. Waist-deep mud caused a fiasco; some troops from the 8th Brigade reached the German support line, then fell back and some lost direction. The 76th Brigade had the same trouble and at 6:30 a.m. an attempt was made to collect exhausted men scattered around in shell-holes. At 4:30 p.m. all operations were cancelled.

A detailed account of 7 Battalion’s first day of battle, by Battalion Commander Colonel K H L Arnott, can be found in the unit war diary. My abridged transcription of it is as follows:

On the night of 12/13th Nov. the Battalion moved up into assembly positions in DUNMOW and SAPPER TRENCHES, 2 companies in each. Battn: Hdqrs. in DUNMOW. At 5-0.a.m. on the 13th all companies got out of these trenches and formed up in 2 lines.

At 5-45.a.m. our Artillery and Stokes Mortars opened an intense barrage on the Enemy Front & Support Lines, and the whole of the Battn. commenced moving forward across the open. Except for intermittent shelling, there was no actual barrage placed on DUNMOW TRENCH until 6-15.a.m. by which time all Coys were well in advance.

At 6-35. a message was received over the phone from the 1st R.S.F. [= Royal Scots Fusiliers] to the effect that the attack appeared to be held up, and that men of all units of the Bde. together with troops of the 2nd Div. had become intermingled.

At 6-40.a.m. the above was confirmed by a message from one of my leading Coys., who stated that he had reached our front line, but that owing to the intermingling of units, and loss of direction, the situation was very obscure. I ordered those Coy to reorganise as far as possible and prepare to continue the advance in support of the R.S.F. At the same time I sent similar messages by runners to my other Coys. The Enemy barrage was reported to be very heavy on our front line at this time.

At 9-45. am one of my officers returned to H.Q. and informed me that he believed the majority of the Battn. were in No Man’s Land, but practically all touch had been lost owing to fog by the time they had arrived at our front line. It appears that several platoons had advanced on the enemy front line believing that the 1st R.S.F. were still in front of them. 2 more runners sent forward at this time, with orders for Coys to withdraw & reorganise, were hit.

By 11-0.a.m. about 60 men had returned and were formed up in DUNMOW. At 11-0.a.m. orders were received to send Reserve L.Guns & Bombers to 1st R.S.F. [corrected to 2nd Royal Scots] H.Q. to assist in holding ROB ROY. About this time a message was received from Lt. Topham, that he had collected about 50 men in our Front Line, and that he was being heavily shelled. I sent orders for him to withdraw to DUNMOW.

At 7-0.p.m. 1 Coy of the 4th R.F. occupied DUNMOW, and I reformed the Battn. in SAPPER TRENCH. At 7-30.p.m. the party in the German Front Line returned to Bn.H.Q. The officer commanding the Coy informed me that the Gordon H. in the enemy front line had received an order to withdraw, and that he had found it necessary to withdraw at the same time.

Several small parties of the 7th K.S.L.I. had during the day advanced as far as the enemy 2nd line, but had been unable to maintain their position there. 10 prisoners were taken by a party of the Battn. in conjunction with the Gordon Highlanders, who escorted them to the rear. It is not known whether they got back.

It was in the midst of all this confusion that John Atcherley was hit. Surviving records of the British Expeditionary Force’s 31st Ambulance Train, transcribed by Forces War Records, tell us what happened next. 10339 Corporal J Atcherley 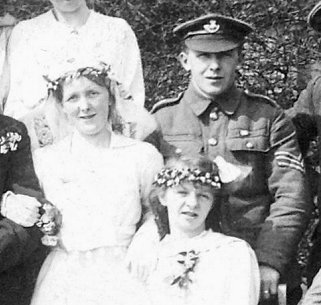 , of A Company, 7th (Service) Battalion, King’s Shropshire Light Infantry, was admitted to hospital on 13 November suffering from a gunshot wound to his right leg. Then, on the 15th, he joined “Trip No.45. Convalescents for England”.

John evidently returned to duty, his entry in the British War and Victory Medals medal roll showing that when his war service ended he was a Temporary Lance Sergeant. Which explains the Sergeant’s stripes on his uniform when he attended the wedding of his sister Fanny Atcherley in 1919!