INSCRIBED ON A PRESENT OF PLATE.

To Mr. George Hilditch:
PRESENTED, WITH OTHER ARTICLES OF PLATE,
BY HIS FRIENDS AND ACQUAINTANCE,
IN TESTIMONY OF THEIR ADMIRATION OF HIS
INTREPID CONDUCT, IN SAVING
MR. THOMAS ATCHERLY FROM DROWNING,
WHILE BATHING IN THE RIVER PERRY, JULY 5TH, 1839.

The above words were reproduced in John William Bythell’s anthology Salopia, The news-room, and other poems, published in 1841. They were followed by this verse:

Can ought that Admiration would bestow,
Superior grace ’round virtuous courage throw?
The rarest gem Golconda might afford,
Were a poor off’ring for a life restor’d!
Oh! light is all we tender or express,
Weigh’d with HIS thanks, who LIVES thy name to bless;
Yet may this Tribute of a lauding throng,
The mem’ry, Hilditch, of thy deed prolong.

Naturally, on discovering this tribute to the heroic George Hilditch, I was more than interested in finding out which Thomas Atcherley he had spared from a watery grave. There were two contenders, first cousins who shared the same name. One was baptised at Ruyton XI Towns on 14 June 1819, son of farmer Edward Atcherley and his wife Mary (née Morris). The baptisms of the three youngest children of Edward and Mary show that the family had moved to Stanwardine in the Fields – not far from the River Perry – by the mid-1820s, and they were still there at the time of the 1841 census.

Also living at Stanwardine in 1841 was the other Thomas Atcherley, son of Richard and his wife Mary (née Jones). Baptised at Baschurch All Saints on 26 September 1811, this Thomas Atcherley was born at Weston Lullingfields. Again though, the parish baptism register shows a move by his family to Stanwardine, by 1816. 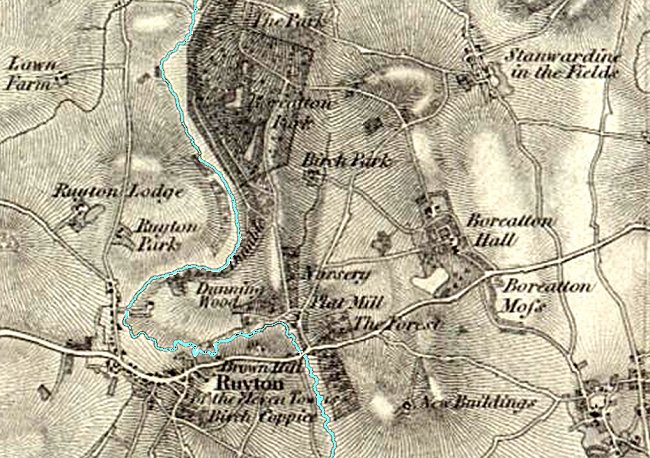 The North Wales Chronicle of 16 July 1839, in a report headlined Preservation from Drowning, provides more information about the incident in which Thomas Atcherley nearly lost his life. The text below follows that of the newspaper article, save for the correction of one spelling error and the breaking down of one, long paragraph into three:

On Friday last, Mr. C. R. Wace and Mr. Thomas Atcherley, two of a party of friends spending the evening at Mr. Hiles’s, of the Platt Mills, went to enjoy the pleasure of bathing in the River Perry, whilst some of their companions were amusing themselves with a game at quoits. Shortly after they entered the river, Mr. Wace, who is unfortunately rather deaf, took a swim down it to some distance, and whilst he was doing so an outcry was heard by others of the party, who on running to the spot found Mr. Atcherley had got out of his depth and sunk.

Mr. George Hilditch, of Eaton Mascott, so well known to our agricultural friends, with great intrepidity and presence of mind, divested himself of his coat, boots, and watch, and immediately plunged into the stream, but not knowing the exact spot in which Mr. Atcherley had gone down, several minutes elapsed, though he was constantly diving, before he could discover the body, which was almost in a kneeling posture; but as soon as he did, he grasped it and brought it apparently lifeless to the shore, himself almost exhausted by his noble and humane exertions.

Blankets, and everything requisite to restore animation, were immediately resorted to, Mr. Higgins, assistant to Mr. Croft, surgeon, being fortunately one of the party, and very quickly afterwards Mr. Broughton, surgeon, Ruyton, arrived, and the united exertions of the assembled friends, aided and directed by these gentlemen, ultimately restored Mr. Atcherley to life, though his recollection was not, we believe, perfectly recovered until two or three o’clock the next morning.

From this report we learn more precisely where Thomas Atcherley’s brush with death took place: near the Platt Mills (or, as the contemporary Ordnance Survey map shown above names it, Plat Mill). And while there are no additional details regarding the identity of Thomas Atcherley, the identities of his friends do provide some clues.

George Hilditch of Eaton Mascott, a farmer, had married Hannah Bickerton, a farmer’s daughter from Ruyton Park, on 28 May 1838. The 1851 census shows that he was born around 1801 at Middle. Mr Hiles of Platt Mills was Richard Hiles, who was living in the township of Boreatton, Baschurch, in 1841. That year’s census, along with the next one in 1851 (by which time “Richard Hiles, late of the Platt Mills” was residing at Stanwardine), confirm that he was born around 1811 in Shropshire.

Thomas Atcherley’s “rather deaf” swimming companion was Charles Richard Wace, born 18 May 1807 in Shrewsbury and baptised there (at the church of St Chad) on 12 June 1807. Mr (John) Higgins, the surgeon’s assistant, appeared with his master John Croft on the 1841 census at Baschurch, his age (rounded down to 25) indicating that he was born between 1811 and 1816 or thereabouts.

Based on the ages of his companions, I think it is most likely that the Thomas Atcherley who was saved from drowning in the River Perry near Platt Mills in 1839 was the son of Richard and Mary. He was their first-born son and therefore stood to take over the family farm at Stanwardine. Richard Atcherley, who was “respected by all who knew him”, died at the age of 61 on 4 November 1834 and was buried at Baschurch four days later. Thus the 1841 census found Thomas Atcherley [

] farming at Stanwardine with his widowed mother Mary. 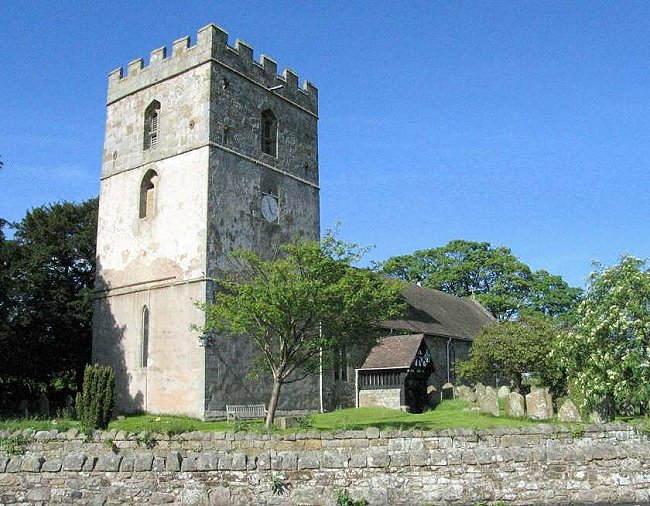 ], daughter of farmer Samuel Eaton, at Cardington St James in south Shropshire. Although the Eaton family home was at Plaish House in Cardington, some distance from Stanwardine, Jane was in fact a Baschurch girl. She had been baptised at All Saints church in that parish on 31 May 1819. She was also an heiress under the terms of her father’s will of 1840, one of the witnesses to which was John Croft, the surgeon of Baschurch whose assistant John Higgins had helped to save Thomas Atcherley’s life.

Thomas and Jane’s marriage in 1847 was followed by the birth of the couple’s first child, Mary Jane Atcherley, who was baptised at Baschurch on 13 October 1848. Then, in 1849, Thomas once more faced a potentially disastrous situation. This time however, water from the River Perry was to be his saviour. The following report, originally printed in the Shropshire Conservative, is taken from the front page of the London Standard of 7 August 1849:

FIRE AT STANWARDINE.—Yesterday morning, about half-past 11 o’clock, a messenger arrived at the Old Salop Fire-office, with information that a fire had broken out on the premises of Mr. Atcherley, a farmer, residing at Stanwardine, in this county, about 10 miles from Shrewsbury. An engine stationed at Platt Mills, the property of this office, was soon in attendance, and the engine from Shrewsbury reached the scene of devastation about a quarter-past 12. The Shropshire and North Wales engine was also in attendance shortly after.

A long range of cowhouse, with other outbuildings, were totally destroyed; and a bull, which was tied up, was so much burnt as to make it advisable to destroy him. Three calves were rescued from the flames. A servant girl states that she was hanging out some clothes about ten o’clock, when she saw a man, who appeared to be a tramp, in one of the cow-bins. She went and told her mistress, and subsequently went into the hayloft, where she discovered the same man. She returned to the house, and in about ten minutes afterwards they discovered the building on fire, smoke issuing from the hayloft and through the slating. There was a description of the man given, but no policemen could be found near the spot. The man, whoever he was, escaped. The damage must exceed 70l.

Although there had been great damage to property, the Atcherley family, their farmhouse and their 100 acres of farmland had survived intact. Thomas and Jane went on to have four more children at Stanwardine: Sarah (baptised 16 January 1850 and shown with her sister and parents on the 1851 census), Roger (born 21 June 1851 and baptised 30 July), Lucy (baptised 30 September 1853) and Alice (baptised 12 July 1855). Alice’s birth, unfortunately, was followed very quickly by Jane Atcherley’s death. “The Affectionate and Beloved wife of Thomas Atcherley of Stanwardine in the Fields,” aged 26, passed away on 16 September 1855 and was buried at Baschurch on the 21st  of that month.

The Atcherley family was dealt another blow within four years of Jane’s demise. Having survived trials of water (in 1839) and fire (in 1849), Thomas was killed on 13 June 1859 by a low fever of “Typhoid character” which he had suffered for three days. He was 47 and, by that time, the only Atcherley still farming at Stanwardine. His death not only left the future of the Atcherley farm hanging in the balance, it also left his five children, whose ages ranged from 10 to about four, as orphans.

Picture credits. Ordnance Survey map showing area around Platt Mills, 1833: This work is based on data provided through www.VisionofBritain.org.uk and uses historical material which is copyright of the Great Britain Historical GIS Project and the University of Portsmouth. It is used under a Creative Commons licence. St James, Cardington, Shropshire: Public domain image (by Welkinridge), taken from Wikimedia Commons and adapted for use on this website. Extract from GRO death certificate for Thomas Atcherley: Image © Crown Copyright, posted in compliance with General Register Office copyright guidance.