The annual celebration of the early closing movement took place last evening, in St. James’s Hall. […] The Chairman [stated that he] was going to say a word on the benefits which had arisen from the adoption of the Saturday half-holiday, but that he had been spared the trouble of doing by a letter which he had received that morning from Messrs. Marshall and Snelgrove, in which they stated that they had adopted the system of shutting-up their business premises on Saturday at two o’clock throughout the year, that their doing so had occasioned no complaint on the part of the public, that the business had not been by any means impaired, but that a great benefit had been conferred on the 700 male and female assistants employed by them.

By the end of the 1860s, William Baugh Atcherley [

] was one of the hundreds of people working for Marshall and Snelgrove, and benefitting from their “Saturday half-holidays.” The company’s store in Marylebone, London, was huge, facing onto both Oxford Street and Vere Street. There were additional premises in Marylebone Lane too, where William Atcherley and nearly 70 other employees were enumerated on the 1871 census. The business was extremely profitable – its co-founder James Marshall amassed enough wealth to buy a house and a thousand acres of land in Mill Hill. James and his store had come a long way from small beginnings.

James Marshall was a Yorkshireman, but he ventured south to London and gained employment with Burrell, Son and Toby, haberdashers, at 10 Vere Street. His initial attempt to run his own business ended with a declaration of insolvency at the end of 1828; bankruptcy proceedings rumbled on until February 1830. But in partnership with W Wilson and John Stinton, Marshall opened up for business once more, at 11 Vere Street, in 1837. After the departure of Wilson later that year, the partnership of Stinton and Marshall continued, becoming Marshall, Stinton and Snelgrove in December 1847 when John Snelgrove joined the team. This trio dissolved their partnership on 14 June 1850 on the retirement of Stinton, after which date the company finally became Marshall and Snelgrove. The store extended into Oxford Street in 1851, and continued to grow (as can be seen from the company’s advertisement in one of the catalogues for the National Exhibition of 1862, reproduced in part below). 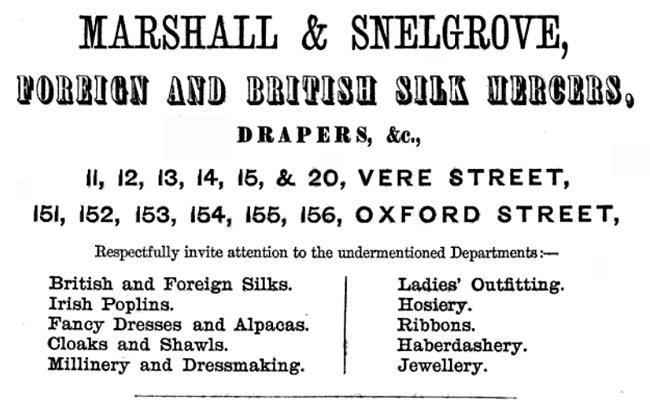 As Marshall and Snelgrove’s store was expanding from its original base on Vere Street in London, William Baugh Atcherley was attending school in the Shropshire village of Ruyton XI Towns. He was recorded there on the 1851 census, along with 15 other pupils, in the home of David Harris, who was the independent Minister of Ruyton Chapel. (William’s family were non-conformists, see An Atcherley in Albertland  – Part 1 for more on this subject.) Although William was said to be 9 years old, he was in fact just over a week away from attaining that age, having been born, in Manchester, on 8 April 1842.

Although William was boarding at Ruyton, his parents, along with his siblings, were not too far away. The Atcherley family home was at Ellesmere, where William’s parents Richard [

] were working as drapers. In 1852 they moved to Liverpool, and William almost certainly went with them. From there, the family relocated to Manchester in the late 1850s, and that is where Richard (who was by then a widower, and employed as a commercial traveller), with three of his children, was enumerated on the 1861 census.

My guess is that William also returned to Manchester when his father and surviving brothers and sisters moved there. However, as was the case in 1851, he was not with them when the census was taken in 1861. William was instead living on the premises of his employer, at 111-113 Stamford Street in Ashton Under Lyne. Pursuing his father’s original line of work, and starting at the bottom of the career ladder, William was a linen draper’s assistant – one of seven (all male, and aged from 16 to 25) who were resident at this particular store. Recorded as a separate household unit at the same address were ten young to middle-aged ladies: a housekeeper, a servant, two mantle makers, two milliners, and four dress makers. One of the dress makers was William’s 15-year-old sister Elizabeth Atcherley [

Who was the employer of William and Elizabeth? To find the answer I turned to the digitised newspapers of the British Newspaper Archive at Findmypast. I soon discovered a notice in The Ashton and Stalybridge Reporter of 2 February 1861, through which Mr George Harrison, draper, of Stamford Street, hoped to recruit three apprentices and two improvers for millinery, dress, and mantle making work. Confirmation that I had found the right man (there were other drapery businesses in Stamford Street) came in the form of the following advertisement, printed (again in the Reporter) on 14 June 1862:

GEORGE HARRISON begs respectfully to intimate to his friends that his usual MIDSUMMER SHOW OF FASHIONS will take place on WEDNESDAY NEXT, the 18th instant, and following days, consisting of his recent purchases in London, comprising several NEW MATERIALS FOR DRESSES AND MANTLES, EMBROIDERED AND TISSUE SHAWLS, MILLINERY, &c.
111 and 113, STAMFORD-STREET.

New materials and products brought back from London to Ashton Under Lyne were clearly an attraction for George Harrison’s customers. But it was London itself that proved to be even more attractive to one of Mr Harrison’s employees. Exactly when William Baugh Atcherley was coaxed down to the capital I have yet to establish, but he was certainly there, working for Marshall and Snelgrove, by 1869. How do I know this? Because of William’s participation in the activities which were organised for the store’s employees during their Saturday half holidays.

In today’s world, when many stores are open 24 hours a day, the early closing movement of the Victorian era may seem rather, well, Victorian. The problem, if you were a shop worker, was that if you were employed by a shop which traded until late in the evening, six days a week, you had to work all the hours for which the shop was open. The Factories Act of 1850 had, on paper at least, set fixed maximum hours of work for women and children in textile mills, with the working week ending at 2pm on Saturdays. Retail workers however had no such protection.

References to the early closing movement appear in the newspapers from the mid-1840s onwards. The Morning Chronicle of 1 Jan 1845 reported that at a meeting of the Metropolitan Drapers Association the previous month, “the evils of the present protracted hours of business in shops were forcibly depicted by several speakers, who clearly proved that the present system was the great barrier to the assistant-draper rising in the social, moral and intellectual scale.” From this movement came the idea of the Saturday half-holiday. In 1860, John Dennis wrote:

… there are some reasons for looking upon this latest development of the Early Closing principle as being a kind of short road to the success of the entire movement. Saturday night is the especial season of late shopping. If the late-hour system can be beaten on the Saturday night, it cannot be expected to afford a very vigorous resistance on the other evenings of the working week.

John Dennis set out the health benefits for employees that the Saturday half-holiday would bring, and another argument, a religious one. Giving workers half a day off on Saturdays would enable them to pursue leisure activities which they might otherwise be tempted to engage in on Sundays, the Lord’s day. So it was argued that the half-holiday “may be regarded as a preventative measure peculiarly adapted to arrest the progress of Sabbath desecration, and also as a beneficial measure for promoting the better of observance of the day”. 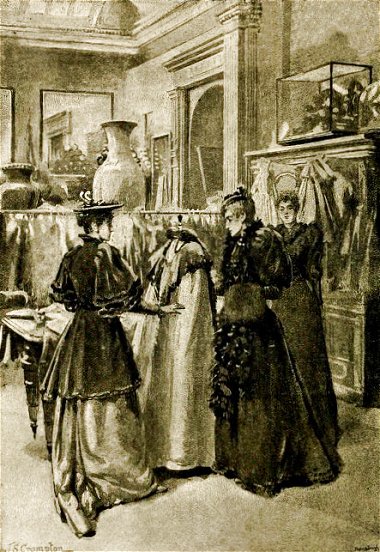 Messrs Marshall and Snelgrove, as we have seen, approved of the Saturday half-holiday and introduced it for the benefit of their employees. Not only did they give their workers Saturday afternoons off, they saw to it that a range of events was made available for those workers to take part in. These included an ‘annual entertainment’, for which of course the participants needed to prepare and rehearse. A report on the “Annual Entertainment by the Assistants of Messrs. Marshall and Snelgrove” in 1868 concluded:

The entertainment altogether was very interesting, and thoroughly successful, and fully proves the fact that there are young men who appreciate the early closing movement, and take advantage of the time thus given for self-improvement, which results not only in pleasure to themselves, but enables them to please others, the desire for which is one of the best attributes of man’s nature.

I was thrilled to discover that William Baugh Atcherley was involved in at least one of his employer’s annual entertainments, thereby joining the ranks of those members of the Atcherley family who performed on the stage (see The stage career of Rowland Hill Atcherley: Act 1, and Lucy Eleanor Louisa Atcherley: Her life and loves in the spotlight). The following is an extract from a report on the show which took place on 29 January 1870:

On Saturday evening St George’s Hall was crowded to witness the annual entertainment given by the assistants of Messrs. Marshall & Snelgrove. The performance commenced with the farce ‘Diamond Cut Diamond,’ the parts of which were most efficiently filled by Messrs. F. Bowness, A. C. Mitchell, W. B. Atcherley, Cowling, Day, Guyton, R. B. Brown, Radford, and Hungate. The interest in this amusing piece never flagged, owing to the admirable manner in which it was acted—the Capt. Seymour of Mr. Mitchell, the Capt. Howard of Mr. Atcherley, the Trap of Mr. Cowling, the Trick of Mr. Thomas, and the Charlotte Doubtful of Mr. R. B. Brown, deserving especial mention for their excellence.

The opening act was followed by a selection from Il Trovatore performed by the company’s amateur band; a performance by the Orinoco Minstrels (15 in number) who sang several ballads and delivered comic anecdotes; and another farce, The Turned Head. These acts were interspersed by several more pieces of music performed by the band.

The entertainment had a further purpose. Messrs Marshall and Snelgrove were regular donors to a range of good causes, from the local poor box to a relief fund for those who had suffered as a result of a great fire in Quebec. To these can be added the beneficiary of the company’s show at St George’s Hall, as the report on that event concluded:

The surplus will be devoted to the funds of St. Mary’s Hospital, so that the visitors had the satisfaction of witnessing a most pleasing entertainment, and the gratification of knowing that they were also assisting the cause of a very excellent institution.

Thanks to his Saturday half-holidays, William Baugh Atcherley was able to join in with other social activities besides acting. For now, all I will say of those activities is that William overcame a number of hurdles, and often witnessed his colleagues rowing…

Picture credits. Extract from page 22 of the International Exhibition, Fine Art Department Official Catalogue (published 1862) taken from digitised copy at Google Books; out of copyright. Illustration from page 155 of Dialogues of the Day (published 1895) depicting a scene in Marshall and Snelgrove’s, taken from digitised copy at the British Library Flickr photostream; no known copyright restrictions.