Following his appearance at the National Air Races in America in 1930, a return visit by Richard ‘Batchy’ Atcherley [

] in 1931 was eagerly awaited. Reports of his involvement in that year’s aerial extravaganza began in June, when former US Navy Lieutenant Al Williams, “speed king of the United States”, “cabled that the British Air Ministry had approved Atcherley’s participation in the American air classic”.

Air Ministry approval was of course necessary as Richard was a serving member of the RAF. The go-ahead was given more readily on this second occasion, after Richard’s success at the show of the previous year did the RAF’s reputation no harm at all. Richard was based at Amman in the Middle East, and had to fly home to England in his own plane before sailing to North America. He departed from Liverpool on 14 August 1931 aboard the Canadian Pacific Duchess Of Bedford, which was bound for Quebec and Montreal, paying for the trip himself. He arrived at Quebec on 21 August, and according to the information recorded by Canadian immigration officials, he declared his ‘race or people’ as Welsh (which was true, as his direct male line ancestry went back to David Jones of Wales).

Richard shared a flight from Montreal to Albany, New York on 24 August with a Miss Vera Ford (I hope she had a very interesting conversation with her fellow passenger!). After being received at New York City Hall by Acting Mayor McKee on 25 August, Richard and aviators from Czechoslovakia, Germany, Poland and Italy went on to Washington DC. There, the airmen were received at the White House by President Hoover. 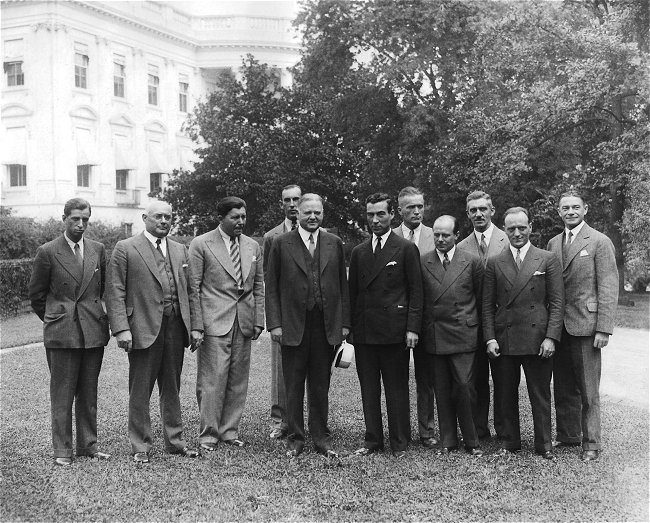 For four of the Europeans (including Richard), the trip from Washington to Cleveland following their meeting with the President did go entirely according to plan:

The four reached Cleveland Wednesday evening after a thrilling bad weather flight from Washington, D. C., which ended at Warren, O., where their plane was forced down. They continued to Cleveland by rail in time to fill radio broadcast engagements. […] The fliers were given a thrill when Pilot John W. Gable, flying their department of commerce trimotor plane, landed in a hay field near Warren after a fruitless search through the rain and storm for the airport.

If Richard Atcherley thought the only way was up after that rain-lashed flight, he was to be disappointed. In fact, after taking his plane up for its first flight, he literally came back down to earth with a bump. The New York Times reported as follows:

CLEVELAND, Aug. 28.—On the eve of the national air races, which open here tomorrow and will continue for nine days, Lieutenant Richard L. R. Atcherley, Great Britain’s representative in the international stunt team, was painfully injured when his plane crashed on its first test flight.

Lieutenant Atcherley is in Berea Hospital tonight and surgeons have taken several stitches in a cut on his forehead. His head was badly bruised, but doctors said there were no indications of a fractured skull. For the next two or three days, however, the British pilot will probably have to remain quiet. His plane was badly damaged.

The accident came just before Lieutenant Atcherley, Lieutenant Alford J. Williams, the American representative on the international team, and several other fliers were getting ready to leave the field. Atcherley’s plane, a Blackburn Lincock, had just been assembled, and as he took off observers noticed that a landing gear strut dropped out of place. It is believed a mechanic either left out a bolt or had made some error in assembly.

The pilot, oblivious of his danger, climbed quickly. Williams seized a fire extinguisher, jumped into a car and raced out onto the airport waving frantically at the flier. Some one else picked up an airplane wheel and ran, holding the wheel aloft to show Atcherley that something was wrong with his undercarriage. The pilot appeared to understand the signals and came in for a landing. He struck hard and the plane nosed over, bounced and turned on its back. Rescuers surrounded the machine almost before it stopped. Atcherley was helped into an automobile and hurried to the hospital.

Talking about this accident years later, Richard recalled watching a film that had been taken. It showed him staggering from the wreckage of his craft, and seemingly joining the crowd who had gathered around it to look for the expected body. “I was so dazed myself that I did not know what we were looking for, but was keen to join in.” At “the local ‘blood box’” (as Richard described the hospital), he received fourteen stitches to the wound across his face.

A bandaged Batchy was back at the Air Races on Sunday 30 August. Not yet ready to take to the air, he was nonetheless not content to be a mere observer.  According to the Albuquerque Journal of 31 August: “The skill and daring of the international team, led by Lieut. Alford J. Williams, again captivated the spectators who sat in their seats until dusk to watch the five aces perform. Seated in the radio control room before a microphone, was a sixth member, Flight Commander Richard L. R. Atcherley, of Great Britain, who directed Williams through his maneuvers.”

Newspapers pictured a rather forlorn looking flyer watching from the ground (which was never Richard’s natural habitat) as other pilots pleased the crowds. But the papers also noted that Richard planned to take part in the show despite his injuries. He was battered and bruised, and his own aircraft was a write-off, but he was soon up, up and away in a purloined plane. From the Chicago Tribune:

Cleveland, O., Sept. 2.—[Special.]—Heavy rain last night and this morning caused the postponement of today’s session of the national air races until tomorrow morning at 9:30 o’clock because of a very muddy airport and the 412 aircraft registered at the field remained grounded, except for the Curtiss fledgling to be flown by Flight Commander R. L. R. Atcherley of Great Britain. 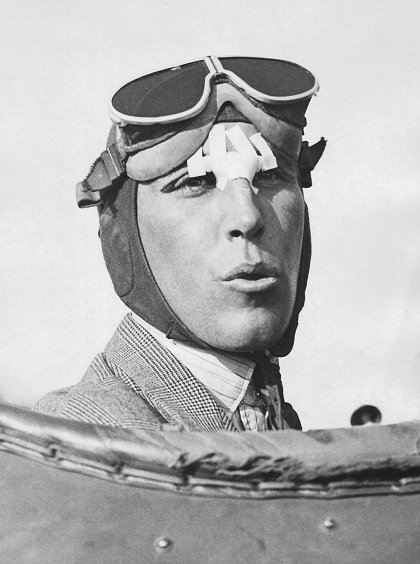 Flight Commander Atcherley […] took off beneath a sullen sky and low clouds for the first time since his accident “to get the feel of the plane” and gave a remarkable show of his own brand of crazy flying—the same type of flying with which he amused crowds at Chicago’s air races last year. He has attached a siren to the exhaust, making the act more amusing than ever.

Batchy was back. His “ghost show” was performed to empty stands, but appreciated enormously by the few who were there to watch. With its air siren singing, the Curtiss machine under Richard’s deft touch made madcap manoeuvres, bouncing, sideslipping and tilting as it pranced and danced around the course. And just because they were there, Richard dipped a wing into the puddles of rain as he flew over them, not twice, not thrice but four times in all. With bandages replaced by plasters, Richard was ready to perform in public once more.

Cleveland, Sept. 3. [U.P.] […] Making his first public flight since he was grounded by injuries, Flight Commander Richard L. R. Atcherley of Great Britain dipped his borrowed plane in a series of “drunken stunts” before 25,000 gasping spectators. […] Veteran pilots acclaimed the Englishman’s performance as one of the most amazing spectacles of skill and nerve they had ever witnessed.

The Youtube film above should start at 5:53, showing Richard Atcherley’s stunts. Although billed as “1930 home movies”, the footage of Batchy is clearly from 1931.

Newspapers reporting on the following day’s performance captured the atmosphere of a showground in awe of Batchy’s bravado. Under the headlines “British Flyer Thrills Crowd” and “Cleveland Spectators Wildly Cheer Atcherley as He Stunts Low”, the Globe-Gazette of Mason City, Iowa carried the following despatch:

CLEVELAND, Sept. 4 [AP.]—British nerve, and an unexpected sense of British humor, are appealing mightily to crowds at the 1931 national air races. These two human attributes are being displayed in large doses by Flight Commander Richard L. R. Atcherley, British royal flying corps, and a member of the 1929 record making British Schneider cup team. Still bandaged about the head as a result of a serious crack-up a few days ago, the lanky British speed ace yesterday plowed furrows in the ground with his wing tips before 53,000 wildly shouting spectators. 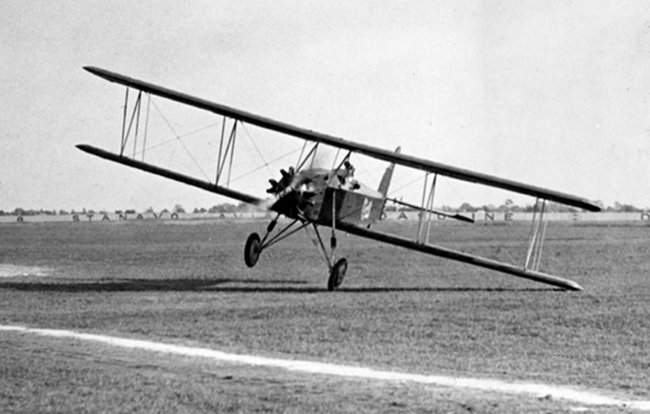 Major Ernst Udet, German war ace, has been cutting grass with his wing tips for a week, but Commander Atcherley put on a display of brilliant stunting that took the crown by storm. The wing tips on his Curtis two-seater are scratched and worn, like the cuffs of trousers frayed by hard wear. He has flown mostly on one wing, and once he dashed about the home pylon on one wheel, teetering precariously.

Before he took off, Commander Atcherley smiled a crooked smile and with aluminum paint drew lopsided circles on the wheels of his ship. ‘This may seem like a foggy idea,’ he confided to mystified mechanics, ‘but the folks out there will think the blankety wheels are coming off.’ The folks did.

Other papers printed pictures of Richard’s act, with captions headed “Drunken Flying” or including such wording as “Flight Commander Atcherley of England showing how NOT to fly a plane”. But the best was yet to come. My thanks to Jenn Parent of The Museum Of Flight for so helpfully guiding me through the process of licensing the picture below for its appearance here.

Cleveland, Ohio, Sept. 5 [AP]—A man in a high silk hat, long black flowing mustache, who said he was Prof. Charles Beresford-Smythe of Oxford university, took up a biplane at the national air races Saturday, amazed the crowd and caused one aviator to faint.

Before he went up he asked Casey Jones of New York, veteran flyer, to go up with him as a passenger. Jones promised be would, but when Professor Beresford-Smythe said he had never flown an airplane or been near one, but that he had worked out a theory of flight and wanted to try it, Jones fainted and was carried off the field.

Hanging his umbrella on a wing of the plane, the professor started up. His plane bounced along the ground, one wing after another scraping the sod. It appeared for a time that the plane would crash. The wind blew it about the field. Then it came down bouncing.

It was discovered that the man In the high silk hat was Flight Commander R. L. R. Atcherley of the British royal air force. It was also discovered that Jones hadn’t fainted—was merely part of the act. 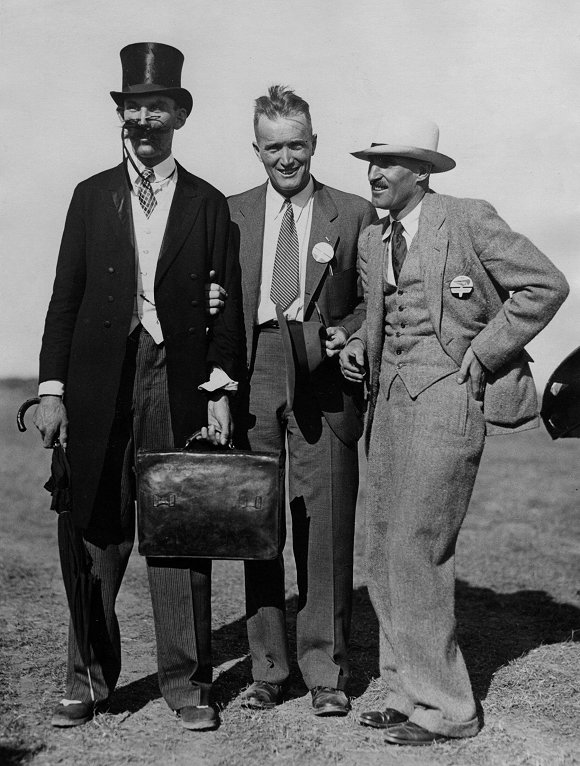 “Flight Commander R.L.R. Atcherley […] thrilled the crowd, when, dressed as an Oxford Professor, who has learned to fly by book […]” – Acme Newspictures

The fabulous photo above of a top-hatted Atcherley appeared in the Daily News (New York), while another picture of the “High Hat Flyer” appeared in the Chicago Tribune (see References below for a link). The craziness was captured in movie form too: do enjoy your flight with Professor Beresford-Smythe!

To conclude, here are the final words of the report in the Globe-Gazette (the rest of which I have reproduced above): “as a souvenir of the races, [Atcherley] is taking home the motor of the ship he cracked up when the landing gear washed out. The rest of the plane—little more then debris—he will leave here ‘as a monument.’”