Thank you to Henry Tilley and his daughter Margaret for this photograph of a family heirloom: a silhouette of their ancestor, Captain James Atcherley [

] of the Royal Marines. 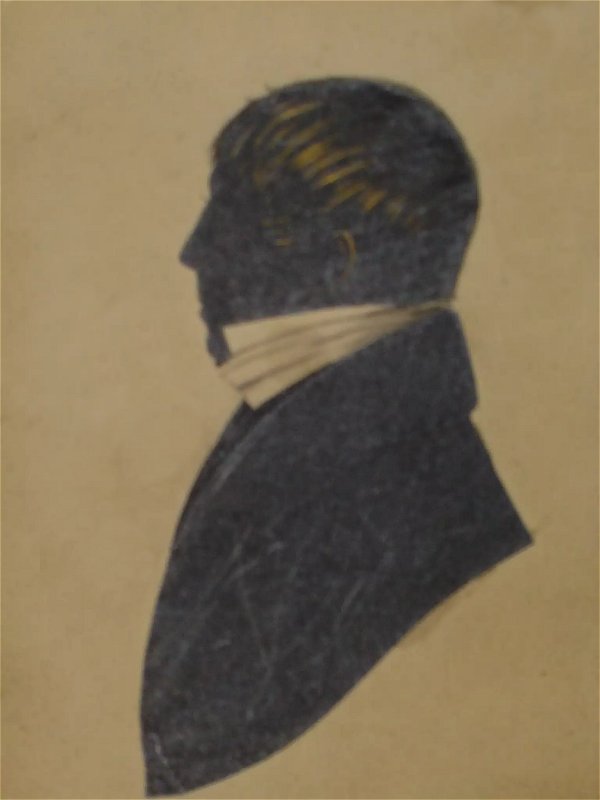 James was the subject of the first Atcherley story I posted to this website, back in January 2011: the story of his exploits at the Battle of Trafalgar was irresistible (see An Atcherley at Trafalgar).

But the full story of James Atcherley is a complex one – there is far more to it than Trafalgar. I have told a part of that story through the words of his wife, Christiana Shairp, in Christiana Atcherley in her own words – Part 2 and Part 3. Christiana’s letters show James Atcherley in rather a bad light, and the evidence does support her claims that James abandoned her and the children of their marriage. It would be interesting to see James’s side of the story!

James left Christiana to live with a woman named of Sarah Perkins, and although they never married (James and Christiana did not divorce), Sarah used the surname Atcherley in most official records. James and Sarah had six children in all, two of whom led family lives which were, more or less, as tangled as their father’s.

In The marital histories of Ann and Eleonora Atcherley I contrast the very different stories of James and Sarah’s two daughters. One led a life of monogamy, the other married three times and had her first husband charged with bigamy!

James and Sarah also had four sons. The stories of two of them, James and George, are incomplete as both disappear from the historical record, with no death or burial records known for either. The story of John is all too brief, as he died at the age of 23. As for William Henry Atcherley, who was known as Henry, what a merry dance he has led me on during my attempts to trace his complicated family history!

I plan to revisit the first part of Henry’s story, The lives of Henry Atcherley, his wives, and their families – Part 1, and also add a concluding chapter to ‘close the book’ on his father, Captain James. In time, I hope also to go back to the tale of Trafalgar. Watch this space!