By the end of 1860, tensions between the northern and southern United States regarding the issue of slavery had reached breaking point. On 20 December, South Carolina adopted an ordinance of secession, becoming the first state to secede from the Union. Six more states followed and on 4 February 1861 the Confederate States of America was established. The stage was set for the American Civil War – a conflict in which English-born James Roger Atcherley [

] would take part. Now, over 150 years later, we can relive some of James’s Civil War experiences, thanks to an extraordinary series of letters which he wrote to his local paper back home in Newark, Ohio.

On 12 April 1861, firing by Confederate forces upon Union-held Fort Sumpter in South Carolina marked the opening of hostilities between North and South. In his inaugural address as the 16th President of the United States on just over a month earlier, Abraham Lincoln had declared that his administration would not initiate a civil war. His hand now forced, Lincoln called for 75,000 volunteers to be provided from the militias of the North, and he declared a naval blockade of the breakaway southern states. 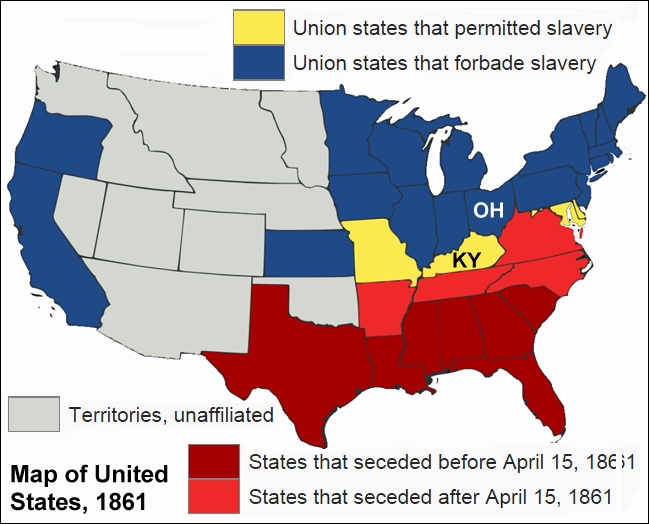 Ohio was one of the states which answered the call to arms, raising regiments of men and sending them south to fight as part of the Ohio Volunteer Infantry. At Newark, in Licking County, John H Putnam started recruiting during the summer of 1861. He based himself at McCune’s Hardware store, and offered a rate of pay starting at $13 per month for men joining up as Privates, up to $45 per month for Second Lieutenants.

Under Putnam’s Captaincy, Company C of the 31st Ohio Volunteers departed Newark for Camp Chase on 13 September. Two weeks later on 27 September, along with the rest of the 31st, Company C received marching orders and reported to Brigadier General O M Mitchell at Cincinnati. From there, the regiment marched to Camp Dick Robinson in Kentucky, arriving on 2 October.

The Newark Advocate of 15 November 1861 carried a letter dated 1 November and signed “J. R. B.”. It opened: ”Mr. Editor:—If there is a Township in Licking County that has turned out more volunteers for the war in proportion to its voters than Union we should be glad to know it.” The author concluded “People of Licking! Shall the army of disunionists  be suffered to triumph? No! no! it must never be! Then up and strike for the perpetuity of the GREAT REPUBLIC!”

Appended was a list of the names of 79 men who had volunteered, and whose names also appeared in the First Muster Roll of the 31st Volunteer Regiment’s Company C. One name not included in the list printed in the Newark Advocate was that of 20-year-old James Roger Atcherley. He had, however, answered the call on 14 September and he too featured in Company C’s First Muster Roll.

James Atcherley’s name was however included in a list of 20 members of the Young Men’s Forum of Newark who had “gone forth with their lives in their hands to defend our country, and sustain the honor of our country’s flag”. This list, part of a letter from the Forum’s President and Late Secrectary, was published in the Newark Advocate of 3 January 1862.  The volunteers from the Forum were described as “her most active and energetic members, constituting the bone and sinew of the organization”. The letter concluded:

She [the Forum] has furnished the Army of the Union with 2 commissioned officers, 9 non-commissioned officers and nine privates; leaving herself quorumless; only 3 of those, who were regularly in attendance, remaining at present in Newark. At a recent meeting, hoping soon to see our national difficulties adjusted, the Union restored, and those whom she had sent out, return, crowned with the garlands of victory honorably won, the association adjourned sine die.

James Atcherley would have been familiar with all the members of the Young Men’s Forum of Newark who had enlisted to fight for the Union. One of those young men, James H Sigler, may also have been known to James for another reason. James H Sigler was a brother of Soloman Sturges Stigler who had, around 1860, joined James Atcherley’s father in business, the pair trading in Newark as Atcherley & Sigler.

Those who knew James Atcherley would not have needed to see the letter from Young Men’s Forum of Newark to know of James’s involvement in the war, for the Newark Advocate had already printed several of his letters under the heading “Army Correspondence”. One such letter appeared in the same edition of Advocate (that of 15 November 1861) which had carried the incomplete list of volunteers. The letter, sent from Camp Dick Robinson, dated 4 November 1861 and signed “Respectfully, J. A.”, was printed on the same page of the list from which James’s name was absent.

This letter was evidently not the first penned by James to appear the paper, but it is the earliest one that I have a copy of. Headed “Army Correspondence, Letter from a Newark Boy”, the letter read as follows. (I have transcribed verbatim – I cannot bring myself to edit James’s wonderful writing – but I have added extra paragraph breaks for ease of reading. Note that Company C – or part of it – had by this time become Company H.)

Mr. Editor:—Since I last wrote, many and various have been the changes here.—Regiments have been pushed along South with a rapidity and energy which, if persevered in, must shortly result in delivering Kentucky from the contaminating influence of those who now pollute her soil.  A battle has been lost and won, the results of which are not limited to the mere fact of our forces driving the enemy before them, but are boundless, in the good they will do to the cause, not only by the encouraging effect it will have upon the Union loving portion, but by totally disheartening the rebels.

The 31st has also moved, not very far to be sure, nor do I know of any very important results that are anticipated from it, but you see they were moving all around us, and so in order to keep up with the times we followed suite and left our encampment on the hill side, and after a heavy march of some five minutes we deposited ourselves and baggage in the camp just vacated by the 2d Kentucky regiment.

The population of Camp Dick has been gradually growing less, and yesterday the last regiment that was left to bear us company, struck their tents and left for parts unknown, leaving us to the pleasant task of guarding all of Uncle Sam’s good things.  But now that we are pretty well assured that we have ‘But a few more days to tote the weary load,’ when we shall press forward to more lively scenes, we console ourselves with the fact that ‘there’s a good time coming.’

Heretofore the health of the regiment has been excellent, not one member of it having died, and but a few, a short time ago had been sick; but now, I am sorry to say, our sick list is very large; few, however, are seriously ill; but the sickness, taken in connection with the fact that a number of our men have been detailed for other duty, reduces the number of men in Company H, who are fit for duty, very much, which makes guard and other duties come rather hard upon the rest of us; and by the by, this is the time for any of the Newark boys who wish to join our company.  Ten or twelve would be very acceptable at this time, and I know there’s plenty of them left yet.  A few of my old friends would look very pretty in a blue suit and brass buttons.

Our officers are anticipating a grand time on to-morrow eve in the shape of a fancy ball, the preparations for which have been in progress for a week or more; and now the platform is built, the money collected, (but where it came from I don’t know, for I haven’t seen a five cent piece for—well, I won’t say how long, for you wouldn’t believe me if I’d tell you,) and last, but not least, the fair beings who, of course, are to form the great attraction, are invited.—Look out, ye fair ones of Newark, that the very susceptible officers of company H do not fall in love with and marry some one of these fair ones (or their plantations.)

We are just beginning to see and feel the first signs of Old Winter.  He comes upon us gradually, as though he were trying to steal a march upon us, but ‘it can’t be did,’ for in point of clothing we are pretty well prepared to meet him.  Still it is cool enough to sleep comfortably with our heads under our blankets, and as we hope soon to turn our faces Southward toward the sunny land where it is said winter never comes, we are not troubled about cold hands and feet.

And now, Mr. Editor, with these few words I will say good bye, hoping that the next time I write to be able to give you some items of more interest. 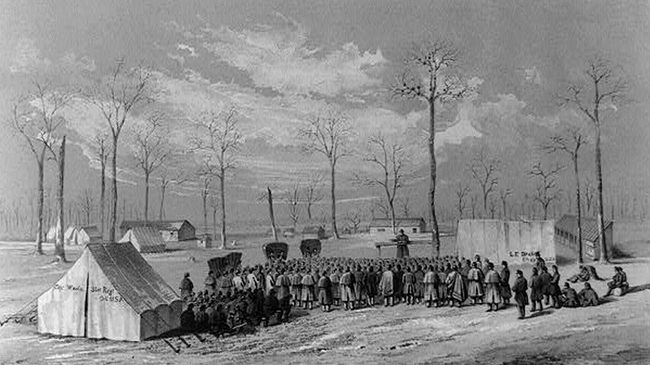 James Atcherley would come to change his opinion about conditions in the South, but not yet awhile. In these early days of his involvement on the periphery of the civil war, life was generally good and there was much to amuse and entertain. Evidence from this can be found in a further letter from James, sent from Camp Dick Robinson and dated 10 November 1861  – on which date the Rev Drake, chaplain, preached to the 31st Ohio Volunteers, as shown in the picture above.