Germany does not want to fight England, but the spirit of the new Germany will brook no interference from any Power which attempts to hinder the attainment of what the Germans consider to be their lawful and rightful aims. The advent of air power has placed a weapon in their hands by which they can impose the same pressure on England which the British Navy imposed on them in the last war. In an amazingly short time they have developed an Air Force which is the most powerful in Europe …

With these words, Squadron Leader Herbert Rowley began setting out the conclusions that he and Group Captain Richard Atcherley [

] had reached as a result of their visit to Germany in October 1936. Rowley and Atcherley had wanted to see “something of the German Air Force’s personnel, aeroplanes and methods of expansion”, and that’s exactly what they did.

On Saturday 10 October, ‘our men in Berlin’ were driven out to Damm aerodrome to see one of the squadrons of the Richthofen group. Rowley had a particular interest in this group – during the First World War he had fought on the same front as the old Richthofen Squadron, flying Sopwith triplanes and Camels in 1917. Along with ‘Dick’ Atcherley he was now able to tour the aerodrome and see how the men and their machines operated in 1936. A half-hour show by a flight of three Heinkels and a demonstration of the Focke-Wolf intermediate trainer was put on for their benefit. 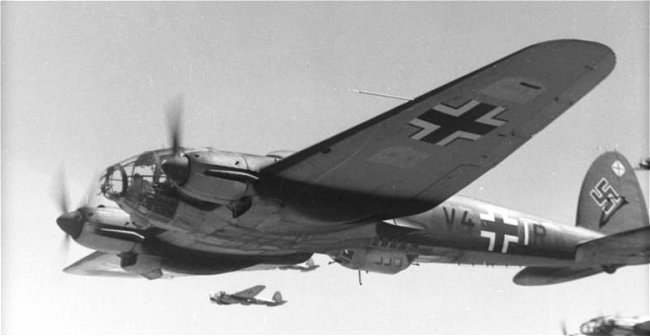 Weaponry was on show too, including a machine gun which could be fired at a rate of 1,000 rounds per minute without jamming. It appeared that experiments with the use of cannon were also being carried out. “Altogether we were very impressed by the personnel of the squadron”, wrote Rowley. He and Atcherley “left at a rather disgracefully late hour” after a long but enjoyable day. Rowley continued:

As we drove away we thought what a very fine gesture it would be if our Fighting Command were to present some piece of silver to the Richthofen Geschwader in honour of its reformation. After all even in the war we had the greatest respect and admiration for each other which almost amounted to friendliness, although we killed each other to the best of our ability. Such a gift to grace the Squadron mess-table would mean a very great deal to the officers of this famous German Squadron …  I commend the idea, (which originated as usual with Dick Atcherley) to the A.O.C. Fighting Command, and should like to subscribe a guinea or so, if the idea is approved.

Seeing German planes and the methods by which they were developed and produced were the objectives of most of the other ‘day trips’ undertaken by Rowley and Atcherley while in Germany. On Friday 9 October, at “the rather grim hour of eight-thirty” they were taken to the DVL (Deutsche Versuchsanstalt für Luftfahrt, the German Research Institute for Aviation) at Adlershof. Accompanying them were three American guests, including Mr Nutt, the Chief Engineer and vice-president of the Wright Corporation.

The tour of the DVL first took in a wind tunnel and an engine-testing department. The next stop, after “an excellent luncheon” was the spinning tunnel. “The Germans,” wrote Rowley, “are most interested in spinning and evidently have had a certain amount of trouble with their new aeroplanes.” In this tunnel, the air was conserved to flow round and round. According to Rowley, “Atcherley explained to the Professors that at Farnborough we let the air go as warm air is about the only commodity which our own D.V.L. can produce in quantity with the money allotted to it.”

After viewing the material testing station, the Germans showed their British and American guests the aeroplanes used for flight tests, mostly Heinkel 70s (Blitz),  Klemms and Messerschmidts. An opportunity to examine more German planes was provided on the afternoon of Sunday 11 October during a visit to Tempelhof. There, Rowley and Atcherley “looked all over the civil versions of the Heinkel 111 and Junkers 86, which are, in my opinion, both structurally and aerodynamically as good, if not better than any of our latest civil or military aircraft.” On the following day, Monday October 12th:

One of our professor friends had kindly arranged for us to fly the Focke-Wolf aerobatic aeroplane at Tempelhof, and Col. Hannesse had promised to have us flown out to Rostock to the Heinkel works. But to our great chagrin, having got up at a most frightful hour, we found that the clouds were almost on the ground, and not only the birds but even the Germans were walking. We were greatly tempted to get into our Gull and fly to Rostock ourselves, as I knew Dick could manage it, provided he could see ten yards ahead, but on second thoughts decided it might be rather tactless.

After getting up close and personal with the civil version of the Heinkel 111 on 11 October, Rowley and Atcherley were able to “crawl all over” the military version, the Heinkel 111 bomber, two days later at Rostock (thanks to the application of Richard Atcherley’s charm upon Prince Henry Reuss on the evening of the 12th). Rowley was of the opinion that this bomber was “an exceptionally clean twin-engined low-wing monoplane” which, aerodynamically, looked “as nice as one could wish. … There is not an airframe in England among all our latest bombers which looks better.” He concluded: “The Heinkel 111 struck me as being an extremely fine bombing weapon”.

Perhaps the most eye-opening day of Rowley and Atcherley’s visit to Germany was Wednesday 14 October, when a tour of the Junkers aircraft works at Dessau took place. A number of other observers also participated in this tour, one of whom, arriving in his own light plane, observed “85 aeroplanes on the aerodrome of which 45 to 50 were new bombers.” Based on this information, Rowley stated: “it is reasonable to suppose that Germany possesses hundreds of these weapons.” He also noted:

Like everyone who visits the Junkers organisation one comes away with but little information in the shape of concrete facts.   The organisation is so vast that it is quite impossible to grasp it during a short visit. … The erecting plant on the aerodrome was estimated by one of the Americans to be as large as the complete Douglas organisation in America. Another American stated that the whole American aviation industry could be lost inside the Junkers organisation. There must be from 5 to 10 thousand men here alone.

Following a demonstration flight of the new bomber, Richard Atcherley was allowed to fly it (“unofficially of course”). He found that “it was extremely pleasant and easy to fly and had no vices.” Junkers were turning these weapons out at a rate of 45 per month. “The construction is extremely simple,” wrote Rowley, “and it is clear that it has been designed expressly for mass construction. … When I think that the Junkers 86 bomber is a fine weapon, almost equal to the best of our new types and superior to most, and when I realise that we have one only of each of our new types, it makes me realise the present Air power of Germany and wonder what it will be like in two or three years time.”

In concluding his report, Rowley contrasted the British and German approaches to military aircraft production. The Germans, he stated, “are concentrating on producing an efficient bombing force first of all … and what is most important, they have realised one simple and commonsense fact which so far has escaped our Air Staff. This is the principle that mass production is not possible on many different types, and that the Air Staff must select one or two good weapons and get them in quantity.”

Britain meanwhile was “ordering many different types of bombers or potential bombers … all of which demand their share of the country’s productive power. … Give us the Vickers and the Bristol bomber in quantity for our striking force, backed up by the Hurricane and Spitfire for our defences, and we shall have a force superior to any in its equipment, and, because of its simplicity, one which can expand readily in time of war.” 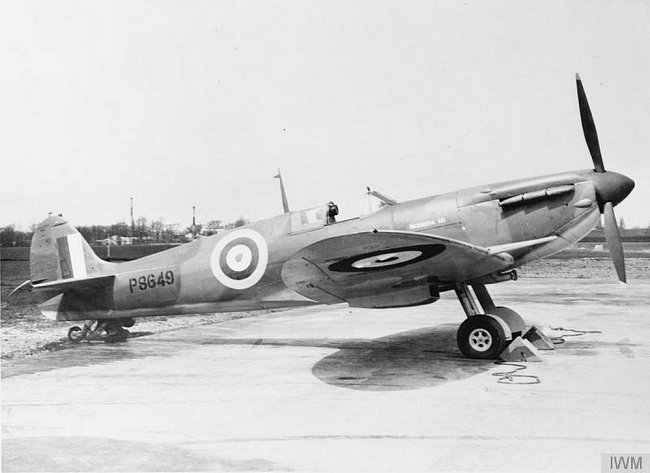 Rowley stated: “I think I am not wrong when I state that there is a large body of experienced and keen Officers in the Royal Air Force who are in complete agreement with my own and Atcherley’s views, and therefore we earnestly hope that they may be given consideration by the Air Staff…”. The final paragraph of his report, which was signed by both Rowley and Atcherley, read as follows:

Unfortunately in these days, when instead of the collective security we had hoped for, we find collective madness, our only hope for peace is to prepare for war. From the point of view of the Royal Air Force, such preparation means building up a powerful striking force. Let us, therefore build it up in the logical way by selecting our best weapon and producing that weapon in quantity.

Rowley’s report probably went unread by those in the Air Ministry who needed to see and act on it. But Rowley had also sent a summary to Wing Commander Charles Anderson, who in turn supplied it to a certain back-bench MP who had managed to get himself appointed to the Air Defence Research Sub-Committee in 1935. That MP was Winston Churchill. He later got to see an edited version of the full report, and meet Rowley in person. What Churchill learned from Rowley (and other sources) helped him to criticise Government policy in the years just before the Second World War.

One of Churchill’s earliest acts after he became Prime Minister in 1940 was to create the Ministry of Aircraft Production. It was decreed that production should be concentrated on the four key types of aircraft which Rowley and Atcherley had called for – the Vickers Wellington and Bristol Blenheim bombers, plus the Hurricane and Spitfire fighters – along with the Whitley V bomber. Though its methods were unorthodox, the Ministry ensured that Britain had sufficient airpower to fight and win the Battle of Britain.

[1] The National Archives, Kew, item ref AIR 40/2086: Report on a visit to Germany by Sqn. Ldr. H.V. Rowley and Flt. Lt. R.L. Atcherley. Indexed at TNA Discovery catalogue.
[2] Timothy Neil Jenkins (2013), The Evolution of British Airborne Warfare: A Technological Perspective. A thesis submitted to the University of Birmingham for the Degree of Doctor of Philosophy. Copy viewed at University of Birmingham website.
[3] Vincent Orange (2006), The German Air Force Is Already “The Most Powerful in Europe”: Two Royal Air Force Officers Report on a Visit to Germany, 6-15 October 1936. In: The Journal of Military History, Volume 70, Number 4, October 2006, pp. 1011-1028. Copy viewed at the Project Muse website.
[4] David T Zabecki (ed.) (2015), World War II in Europe: An Encyclopedia. Page 1406. Previewed at Google Books.
[5] Stories of the Battle of Britain 1940 – Lord Beaverbrook, a Week at the Office. At: The Spitfire Site (website, accessed 10 Jul 2015).