Notice is hereby given, That we, whose Names are hereunto subscribed, being inhabitants of the townships of Kinnersley, Preston, Hoo-Hall, Horton, Lubstreepark, Buttery Farm, Cheshall, Longford, Brockton, Tiberton, Cherrington, Dearyhouse Farm, Rowton, Moortown, Sambrook, and Eyton, near Wellington, in the County of Salop, have formed ourselves into a Society, to prosecute, at our joint Expense, all House-breakers, Horse-stealers, or Persons guilty of any Manner of Felony that shall be committed against any of our Persons or Properties; […] – Adams Weekly Courant, 17 January 1775.

In The mothers of the Moortown Atcherleys, we saw that John Atcherley [

], in the tenancy of the family farm at Moortown, in the Shropshire parish of Ercall Magna. John was not the only child of Elizabeth (by her husband, also named John [

]), nor was he the eldest son – but he was the only child of hers to survive long enough to marry and continue this Atcherley line.

] son of John Atcherley born at the moor was baptized the second day of September” in 1737 according the parish register of High Ercall St Mary & All Saints. A little over four years later, the same register recorded that “Samuel Son of Jo: Atcherly & Elizab: his wife was buried the thirteenth day of February”, 1741/2. In between these two dates, the baptism of John himself took place on 4 January 1738/9, and that of his younger brother Thomas [ 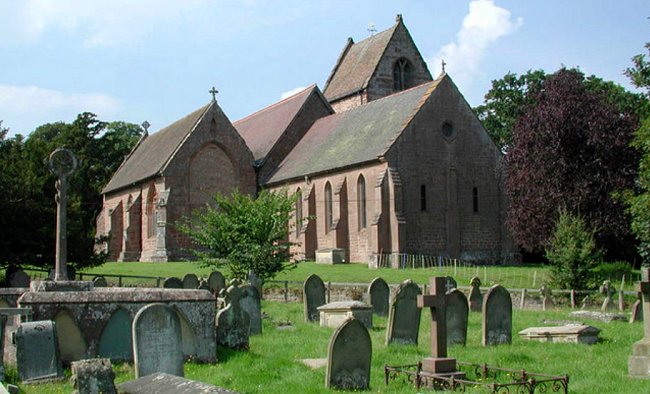 These two baptisms took place not at High Ercall, but at another Shropshire parish church some distance away – St Michael & All Angels in Alberbury (pictured above). It would appear that this Atcherley family was residing within that parish at the time, although the family’s abode was not recorded in the register. I have found no other records connecting these Atcherleys to Alberbury: records from 1750 onwards almost always place them in the parish of Ercall Magna. Almost always…

1750 was the year in which John Atcherley the elder died, aged about 35, and was buried at High Ercall. Thirteen years later, in 1763, “Thomas Son of Mrs Elizabeth Atcherley of the Moor was Buried May the Twenty Second” at the age of 22. Just over a month before this sad event, a happier one had occurred – Thomas’s brother (and the subject of this story) John Atcherley, by that time aged 24, was married. His wedding was one of the events which did not take place in the parish of Ercall Magna.

The venue was in fact a long way from Shropshire, the nuptials being held at St George Hanover Square in Westminster, Middlesex. Its register shows that “John Atcherley of this Parish, Batchelor, & Elizabeth Beech of this Parish, Spinster, were Married in this Church, by Banns, This Twentieth Day of April, In the Year One Thousand Seven Hundred & Sixty three.”

] with any certainty. The age attributed to her on her burial suggests that she was born around 1730/31, so she may have been “Elizath: Beech D: to Will: by Elizabeth” (Elizabeth Beech Daughter to William by Elizabeth), born 3 November 1730 and baptised at Westminster St Margaret on the sixteenth of that month. If she was, it is possible that her parents were wed on 19 September 1719 at Covent Garden St Paul, the register of which recorded the marriage of “William Beech of St Leonard’s Shoreditch & Elizabeth Funnell of this Parish”.

It appears that John and Elizabeth Atcherley continued to live in Westminster for a while after their union. Although their first child, Samuel [

], was baptised at High Ercall (on 2 March 1764), Samuel was described in the parish register as “Son of John Atcherley a Sojourner at the Moortown”. John was staying at Moortown (as no doubt was his wife), but only on a temporary basis. The couple’s second child, named John [

] after his father and grandfather, was baptised at St James Piccadilly in Westminster on 6 June 1766, having been born (presumably in the parish) on the 18th of the previous month.

] son of John Atcherley of the Moor” was baptised at High Ercall, it is probable that John had brought his family back to Moortown for good. By that time his mother Elizabeth was aged about 55, and it might be that she had finally decided to hand over the running of the farm to John. Elizabeth died in 1777, her gravestone recording her age as 64. Two records placing John at the Moortown in the years immediately following his mother’s death are his inclusion in a list of subscribers to The History and Antiquities of Shrewsbury, published in 1779, and a document dated 26 July 1781, held by Shropshire Archives, which described him as “John Atcherley of the Moortown, Salop farmer.”

It was as a local farmer, in the 1770s, that John Atcherley became one of nearly 40 people who formed and subscribed to a society to prosecute “all House-breakers, Horse-stealers, or Persons guilty of any Manner of Felony” committed against any of the society’s members. The earliest record of this society I have found so far is the notice published in Adams Weekly Courant of 17 January 1775, the first part of which appears at the head of this article. The notice continued:

And by Articles entered into for the same purpose, any of the Persons so subscribing, having any of their Properties stolen or taken away from them, shall give the earliest Notice to the several Persons who form this Society, who shall immediately, upon such Notice given, go or send a sufficient Man and Horse to the Place or Places assigned them, in Pursuit of such Felon or Felons, as they are determined to spare no Cost or Pains to bring the Offender or Offenders to publick Justice.
N. B. If any Offender shall be apprehended and convicted, by Means of any information given by any Gate-Keeper, or other Person, he shall be handsomely rewarded by the said Society.

Further notices publicising the society, its objects and its subscribers appeared in the Chester Chronicle in 1775 and 1776, and in the Shrewsbury Chronicle in 1775, 1776 and 1778. It was one of an increasing number of such organisations, typically known as societies (or associations) for the prosecution of offenders, which were created around that time. In making themselves known to the public through notices in newspapers, those societies no doubt hoped to deter would-be felons from targeting their members.

It is through such notices that I have been able to get some idea of the extent of these societies and their activities in and around Shropshire in the 1770s. In the Shrewsbury Chronicle of 30 October 1773, for example, three societies – for Whitchurch, Shawbury and surrounding villages, and the parish of Llangollen in Denbighshire – advertised their objectives and memberships.

The Whitchurch society raised a fund for prosecuting those committing burglaries or felonies, not only against its 27 subscribers but also against “any other Person or Persons within the said Town and Parish, who shall be thought a proper object or objects to be entitled to their protection and assistance.” The 20 subscribers of Shawbury, Wytheford, Edgboulton and Muckleton promised to prosecute “all felonies done within [their] bounds” and that they were “determined to ride England through, in order to bring them to justice.”

Further notices in the Shrewsbury Chronicle (dates of publication given in brackets) gave details of: 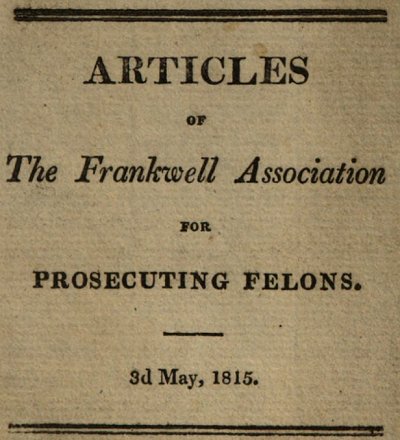 From the cover of the Articles of of The Frankwell Association for Prosecuting Felons, 3d May 1815. Frankwell is a suburb of Shrewsbury.

Why were such associations formed? A clue can be found in the notice announcing the establishment of association for the Oswestry area, described above. To quote Matthew White (who wrote an article for the British Library website in 2009): “18th-century law enforcement was very different from modern-day policing. The prosecution of criminals remained largely in the hands of victims themselves, who were left to organise their own criminal investigations. Every parish was obliged to have one or two constables, who were selected every year from local communities, and were unpaid volunteers. These constables were required to perform policing duties only in their spare time, and many simply paid for substitutes to stand in for them.”

The failure of the parish (or township) constables to adequately protect people’s property was also highlighted by historian Jim Sutton in his well-researched paper of 2004, Protecting Privilege and Property: Associations for the Prosecutions of Felons. Jim traced the history of these associations from their origins in resolutions adopted at parish vestry meetings (which set out terms for using parish funds to prosecute felons), to the ‘mutual subscription societies’ which then arose and came to prominence in the late 1700s and early 1800s, and their eventual decline as the 1800s progressed. The formation of the Shropshire county police force in 1840 (following the passing of the County Police Act in 1839) made the county’s societies and associations for prosecuting felons largely obsolete.

John Atcherley of Moortown, subscriber to the society covering his part of Shropshire, did not live to see the transition from parish constables to a publicly funded, professional police service. Predeceased by his youngest son Robert (who died in 1795 at the age of 26 – see Robert Atcherley and the ‘Rutlandshire Cavalry’), “John Atcherley of the Moortown was Buried February 21st” in 1803 at High Ercall. He left a widow, Elizabeth, and sons Samuel and John junior – but he did not leave a will. Administration of John Atcherley’s estate was granted to Elizabeth, who lived for nearly 18 years after her late husband’s demise. Elizabeth Atcherley (née Beech), of Moortown, aged 89, was buried at High Ercall on 15 December 1820.

Picture credits. Alberbury St Michael: Photo © Copyright John Salmon, taken from Geograph and adapted and used under a Creative Commons licence. Extract from cover of Articles of The Frankwell Association for Prosecuting Felons, 3 May 1815: image taken from Google Books.