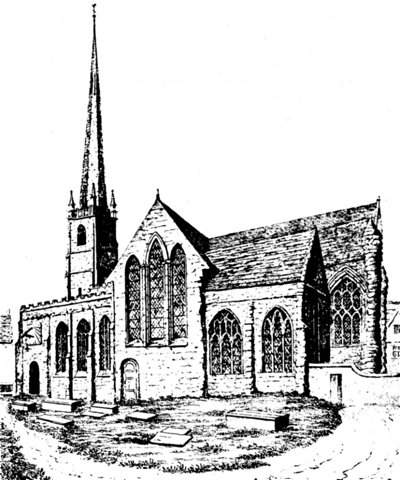 At the churches of Shrewsbury St Alkmund (pictured right) and St Chad, from 1692 to 1698, four Atcherley children were baptised, sons and daughters of Thomas and “Jane his wife”. But where was the record of Jane’s marriage to Thomas Atcherley? Even when Jane’s maiden surname became known to me, I was left wondering about the whereabouts of her wedding. In the end a Chancery case has explained the missing matrimonial information – and revealed much more besides.

] was the youngest son of John Atcherley of Stanwardine in the Fields. Baptised on 3 May 1668 at the parish church of Baschurch All Saints, he was the fourth of five children born to John (then aged 56) and his second wife Mary (née Spendlove). Following John Atcherley’s death in 1672, Thomas and his siblings were brought up by their mother.

It was most likely the widowed Mary Atcherley who arranged Thomas’s apprenticeship to George Evanson of Shrewsbury’s Mercer’s Company in 1682. (Thomas’s father John had been apprenticed, but to a member of the Drapers Company, in a similar fashion back in 1627 – see John Atcherley, draper of Shrewsbury). The Mercers, Ironmongers, and Goldsmith’s Company (to give this body its full name) had been in existence since at least 1424-5. Along with the Drapers Company it was one of the “two most important Guilds of Shrewsbury”. Thomas was “turned over from George Evanson to Robert Hill” in 1688, and would have completed his seven years apprenticeship about a year later, aged around 21.

Almost certainly it was through his association with the Mercers Company that Thomas Atcherley met his wife-to-be Jane. Although the renowned genealogist Joseph Morris (1792 – 1860), in his Genealogy of Shropshire, claimed that Thomas married Jane Williams of West Felton, Jane’s true identity was revealed to me by the Atcherley pedigrees and genealogical notes from the collection of the Rev John Newling (1762 – 1838). (See also Atcherleys reunited, in which this same source resolved a mystery involving Thomas Atcherley’s younger sister Mary.) Through the Rev Archdeacon Plymley, Newling knew that Thomas Atcherley of Salop, mercer, had married Jane [ 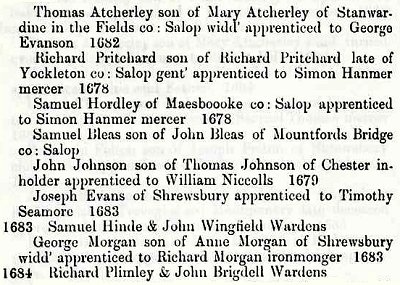 Richard, his surname written as Plimley, was listed as one of the Wardens of the Mercers Company in 1684. The following year however, he was recorded as “Mr Richard Plimly mercer from Snt Chads” in very different circumstances – an entry in the parish register of Shrewsbury St Julian for his burial on 2 July 1685.

Three days before his burial, “Richard Plymley of the Town of Shrowesburie in the County of Salop Mercer” made his last will and testament. He made provision for Anne his wife (who was to receive £200 plus an annual payment of £40), for his daughters Jane and Anne (they were bequeathed £500 apiece, to be paid to them on marriage or at the age of 20 whichever came first, with an annual sum of £10 each in the meantime) and for his son Joseph (who was to receive Richard’s lands and property in Shrewsbury and at Norton in Hales).

Richard Plymley’s will ended with a request “to my deere wife to bee kind unto my poore Children” and the appointment of his “said deere wife” to be sole executrix. But just four weeks after Richard’s burial, “Mrs Anne Plimly widow from Snt Chads” was also interred at St Julian’s. Jane, the eldest surviving child of Richard and Anne, was only 16 (or thereabouts) at that time, having been baptised at Shrewsbury St Chad in 1669.

Before she died, Anne Plymley had taken steps to ensure that her children would receive the legacies bequeathed to them by their father. In her own will, made on 21 July 1685, Anne stated: “And whereas my late deare Husband Richard Plimley did make his last Will and Testament which I have not yet proved … my mind is that the contents of my said Husbands Will shall be performed in every thing by my Executors hereafter named”.

Jane Plymley probably reached the age of 20 in the Summer of 1689. It appears however that she did not receive the inheritance which was then due to her. Nor, it would seem, did she receive it when she married Thomas Atcherley. Thomas and Jane therefore submitted a bill of complaint to the Court of Chancery in London, in an attempt to obtain what was rightfully theirs. 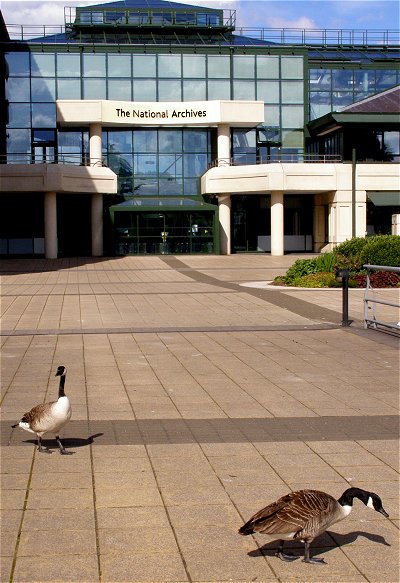 Although various documents relating to this and subsequent cases have survived and are now kept at The National Archives at Kew (pictured right), they do not seem to include the outcome of Thomas and Jane’s actions. What I do know is that in pursuing their legal case, one of the problems that Thomas and Jane came up against was the same one which I encountered over 300 years later while pursuing the couple’s genealogy. That problem was the absence of a record of their marriage! To address this issue, Thomas Atcherley’s brother Roger, a Counsellor at Law, prepared a list of questions (or interrogatories) which were to be answered under oath by witnesses:

Imprimis Doe you know the parties plts & Defts or any & which of them & how long have you soe known them. Speake yor Knowledge herein with reasons of and for the same.

Item Were you present when the Complts were married when & by whom were they married, have they cohabitted together since as Husband & Wife, speake your Knowledge & beliefe herein with yor reasons of & for the same

Item have the Defts or any & which of them received all or any & what parte of last Michas [= Michaelmas] & Lady Day Rents due for certaine Messuages Lands & Tenements late of Richard Plymley deceased late ffather of the Complt Jane situate lying and being in the Towne of Shrewsbury & Norton in the County of Salop, speake your Knowledge & beliefe herein with yor reasons of & for the same

The “Depposicons and sayings of Witnesses” were “taken at the dwelling house of Dorothy Cotton widow situate in Baschurch in the County of Salop” on 4 May 1693. One of the three witnesses was Robert Yates, a yeoman of Baschurch aged “ffifty yeares or thereabouts”. He deposed that he had known Thomas Atcherley from his childhood, and Jane for about five years.

Robert Yates also stated that he had been present and had seen Thomas and Jane married by “George Hudson Vicar of Baschurch in the parish Church of Baschurch aforesaid neere about Two yeares since about Eight of the Clocke in the Forenoone of one Lords day and that they have Cohabited loveingly as husband and wife ever since And the reason of this his beliefe is that hee hath bin severall tymes att their dwelling house in Shrewsbury in the said County of Salop and particularly at the baptizing of a child of their bodies begotten as this Deponent is informed”.

Another witness was Thomas Atcherley’s sister Mary, then aged about 19. She deposed that she had known Jane for about seven years, which gives us a clue as to when Thomas might first have met the young lady who was to become his wife. The record of Mary’s deposition concluded:

The key witness was George Hudson himself, then aged “ffifty one yeares or thereabouts”. He had known both Thomas and Jane from their childhoods, and had in fact baptised Thomas. His deposition continued:

Even though George Hudson made a deposition along with Mary Atcherley, to confirm details of the marriage which he had failed to record in the Baschurch parish register, I suspect he also neglected to enter details of Mary’s own marriage – which almost certainly took place at Baschurch – a few years later (see Atcherleys reunited). On the plus side, despite his failure to record Thomas and Jane’s marriage in the parish register – because of it, in fact – I now know far more about that happy couple than would otherwise have been the case.

To be sure, I don’t have an exact date for the nuptials. But I can say that Thomas Atcherley and Jane Plymley, having met around 1686, were married by licence at Baschurch one Sunday morning in August 1691; that family members saw them “bedded” on the first night after their wedding; and that Thomas and Jane cohabited together lovingly at their home in Shrewsbury, where they were visited by both family and friends. I am very glad that when I chose the documents I wanted to study at The National Archives on Saturday, I took a chance on the Chancery case of Thomas and Jane Atcherley!

Picture credits. Shrewsbury St Alkmund: from The History and Antiquities of Shrewsbury, 2nd edition, volume I, published 1837 and therefore out of copyright. Apprentices and Wardens of the Mercers Company: from Transactions of the Shropshire Archaeological and Natural History Society, published 1885 and therefore out of copyright. The National Archives, Kew: photo by the author.