Another opportunity to buy copies of historic birth and death register entries at a lower price is in progress, and I have taken full advantage! The opportunity takes the form of a second, extended pilot of providing these uncertified extracts in electronic (PDF) format by the General Register Office (GRO) for England and Wales. The cost of the PDFs – £6 each – is a great saving on the £9.25 which is normally charged for a paper certificate (or certified copy). [Update: The PDF trial has, since I wrote this article, ended and the cost of PDFs has risen to £7 each, with the cost of paper certificates has risen to £11.]

Thanks to this and previous pilots my collection of Atcherley BMD (birth, marriage and death) ‘certificates’ has grown considerably. The collection is available to view online via my Atcherley Flickr photostream – where you will notice that the collection is rather heavily biased towards Atcherley deaths. 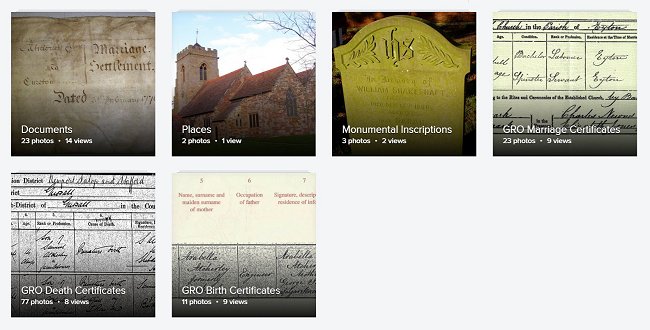 Government records of BMDs – which have been kept in England and Wales since the middle of 1837 – are vital components in the early stages of building accurate family trees. A birth certificate usually gives the names of the subject’s parents (including the maiden surname of the mother). From this information, hopefully, a record of the parents’ marriage can be found and that (in England and Wales) should give the names and occupations of the fathers of the newlyweds. All being well, the birth certificates for the bride and groom can then be tracked down, and so on. Once the trail goes back into the years for which census records are available, there are additional clues to help with the detective work. But where do the death certificates fit in?

A frequently quoted family history mantra is that we should “Hatch, match, and dispatch” our ancestors. It’s a crude but memorable saying, which encourages us to find all of our ancestors’ vital records: birth (or baptism, or both), marriage (if applicable), and death (or burial, or both). These set the framework for telling each subject’s life story from beginning to end. All stories need an ending, and for the genealogist, establishing with certainty when a person died means the search for them in later records such as censuses can stop.

The information which is recorded at the end of a person’s life – in the aforementioned burial (or cremation) records, or at inquests, in death notices or obituaries, on gravestones or memorials, in probate or other documents – can reveal a great deal about that person’s circumstances at the time of their decease, and about the life they led before they passed away.

Some of the data from the sources I have just listed replicates that which can be found in death register entries, such as the date and place – and perhaps the cause – of death. But those sources aren’t always available, especially for our poorer ancestors. Even if such records do exist, I have been amazed at some of the additional information I have been able to glean from the Atcherley death register entries which I’ve obtained copies of. Let me give some examples, as I dissect the death records of England and Wales and explore their anatomy. I shall concentrate primarily on those which were kept from 1837 until early 1969, which recorded details of the deceased and the registration of their passing under nine headings.

1: When and Where Died

The two key pieces of information for the genealogist are given here. The ‘where’ has proven to be of particular interest. Most Atcherleys (in common with the population at large) died in their homes, with deaths in hospitals not becoming commonplace until well into the 1900s. There were of course exceptions: deaths due to accidents while working or travelling for example, and for those of limited means, death in the workhouse infirmary.

In many cases, death register entries were unambiguous about workhouse deaths. In 1874, John Atcherley [

] was recorded as dying in the Union Workhouse in Wellington, Shropshire (see image of death certificate). I suspect the same place of death was given in the entry for John’s sister Sarah [

] passed away in Manchester Workhouse in 1893 (image of death register entry).

Workhouse deaths featured in another, closely related branch of the Atcherley family tree, but not all of these are obvious from the associated death register entries. The life of Mary Palin, née Atcherley [

] ended in Tunstall Workhouse Infirmary in Staffordshire in 1911 (image of death register entry), while her brother Samuel Atcherley [

] – my great grandfather – died in the Newport Workhouse Infirmary in Shropshire, in 1914 (image of death register entry). The deaths of two siblings of Mary and Samuel, John Atcherley [

] (in 1930; image of death register entry) were both recorded as taking place at 18½ Holyhead Road in Wellington, Shropshire. However researching this address online reveals (via a Rootschat discussion and Peter Higginbotham’s excellent Workhouse website) that 181-2 Holyhead Road was the address of the Union Workhouse. I’ve now amended the end of John’s story, The life of John Atcherley, waggoner of Kinnersley to include this information.

It was recognition of the stigma associated with workhouses which led to deaths in those institutions being ‘hidden’ when the place of death was recorded. According to Peter Higginbotham (again on his Workhouse website) the change was made after a recommendation from the Registrar General in 1918; this followed a similar recommendation in 1904 relating to births in workhouses. The practice continued even after workhouses were superseded. The 1947 death registration for Samuel Atcherley’s widow Jessie [

], my great grandmother (image of death register entry), shows that she died at 52 Marston Road Stafford – the address of Stafford’s Public Assistance Institution which was, prior to 1930, a workhouse.

Other institutions recorded as places of death for members of the Atcherley family include:

These few records alone hint at some very sad stories.

] was born at 69 Marlborough Road in Camberwell on 29 July 1876 and died there on 22 February the following year. His death was registered not by his mother, but by Eva J Branton. Looking at the census entries for 69 Marlborough Road in 1871 and 1881 I found that Eva’s mother-in-law Charlotte Branton was the head of the household, and the schedule of 1871 showed that Charlotte was a nurse, with three nurse children. This provided some useful information for my story about The six sons of Sarah Atcherley.

Sometimes people died in the homes of relatives, rather than in their own homes. On 11 December 1848 for example, 1-year-old Fanny Atcherley [

] passed away at Waters Upton (image of death register entry), not at nearby Moortown with her parents. In this case the informant was Eleanor Icke [

] died one week later, at home at Moortown (image of death register entry), so it seems likely that grandma was caring for granddaughter Fanny so that daughter Elizabeth Atcherley [

] did not have to look after two ailing children at the same time. Another example is the death of Eliza Atcherley in 1896 (image of death register entry), who was a long-time resident of Aston in Birmingham, but died at the home of her sister Priscilla Matthews.

Confirmation that a death took place at the home of the deceased can in some cases be obtained from the address of the informant – if this role was undertaken by the surviving spouse for example, their address should match the place of death of the deceased. If the death did not take place at home, the actual address of the deceased may be given under Rank or Profession. This part of the above-mentioned record of Thomas Atcherley’s death at the Manchester Workhouse in 1893, for example, gave his address as 259 Hardman Street in that city.

There have been no real surprises here – the names on the death register entries I have ordered being known in advance from the various online indexes I use (FreeBMD, FamilySearch, the commercial genealogy websites, and the GRO’s own index – you need to be registered with the site and signed in to use this).

One thing that has gratified me is that in ordering death register entries for Atcherley women who married and gained more ‘popular’ surnames (including Pye, Palin, Ferrington, Griffiths and Brown), checking the other information given within them has confirmed that I identified the correct ones in the indexes! There is also an Atcherley woman who died as a Jones, and I’m fairly confident that I have the correct death register entry for her too!

As with the name, there have been no surprises regarding the sex of the deceased in the historic death register entries I have ordered copies of. But I am always prepared for errors in the ages which are given in death records! The persons acting as informants sometimes did not know exactly how old the deceased was, and even if they were told before the death it is possible that they were deliberately or unknowingly misinformed. To give one example, when the death of Helena Anastasia Atcherley [

] was registered in 1919 (image of register entry) her age was given as 58 – but she was actually 62. The informant in this case was not a family member, and may have been a servant. Other examples of dodgy or incomplete ages or dates of birth, which I know of from death register index entries, include Mary Atcherley née Rennell [