The marriage of William Henry Atcherley [

] on 11 April 1882 at High Ercall in Shropshire was one of many unions between members of the parish’s farming families. Given the number of intermarriages between these families, in particular the Atcherley, Brookes, Icke and Shakeshaft clans, some of the weddings were, inevitably, between people who were related. William and Charlotte for example were second cousins, their common ancestors being their great grandparents William Icke and Margaret Humphreys. Tracing the connections between these families reveals not so much a family tree as a complex web of “kissing cousins.”

] (on 10 June 1912 in Solihull, Warwickshire). The common ancestor for these two was their great grandfather Samuel Shakeshaft. They did not have a great grandmother in common however. Joseph Baxter Shakeshaft was a great grandson of Samuel and his first wife (Ann Skitt) while Ada Mabel Atcherley was a great granddaughter of Samuel and his second wife (Catherine Parton). Another, indirect connection between Joseph and Ada was that Joseph’s grandfather, also named Joseph Shakeshaft, had been married to Emma Charlotte Atcherley, Ada’s great aunt (or grand aunt). The younger Joseph was descended from the older Joseph’s second marriage, to Martha Wright. 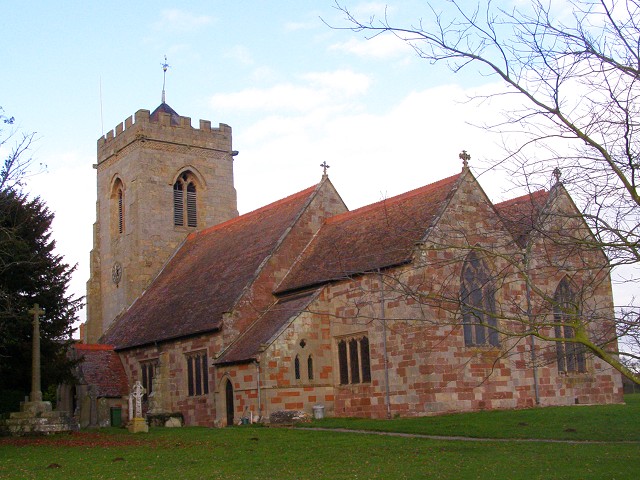 The church of St Mary and All Angels, High Ercall, where many Atcherley, Brookes, Icke and Shakeshaft marriages (and baptisms and burials) took place.

Two of the children of William Atcherley’s sister Charlotte Emma Atcherley (by her husband John Brookes, who she married on 2 October 1867 at High Ercall) married first cousins. Gertrude Elizabeth Brookes [

] (a daughter of Charlotte’s sister Mary Ellen Atcherley, by her husband Edward Ryley) in Durban, Natal, South Africa on 2 March 1899. Both of these couples therefore had shared grandparents: Robert Atcherley and Elizabeth Icke. The marriage of first cousins is legal in Britain, and has been since an Act of Henry VIII passed in 1536 [1]. There are mixed messages about the possible health risks for children born to parents who are closely related [2], but since neither of these couples had any children the point is moot.

], had married at High Ercall in 1862 and lived in Market Drayton before emigrating to Natal, South Africa with their children. Following the untimely death of Mary Ellen in 1879, not long after the family’s arrival in South Africa, Edward married her sister Margaret Jemima Atcherley [

] at Pinetown, Natal in 1883. Meanwhile the weddings of the parents of Thomas and Gertrude Elizabeth Brookes (John Brookes [

]) both took place in the same year, 1867, at High Ercall, with John and Samuel marrying each other’s sisters. And while the Atcherley siblings were not directly related to the Brookes siblings, Samuel and Charlotte Atcherley’s great uncle (or grand uncle) Robert Icke was married to John and Helen Brookes’ aunt Ann Brookes. 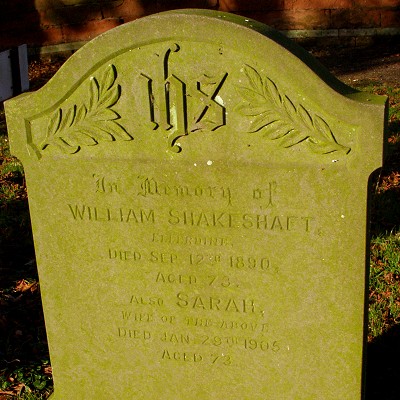 To conclude this everyday story of intermarrying country folk (to misquote the original tagline of The Archers), let’s look at the marriages of three Icke sisters and those of some of their children. Elizabeth, Sarah and Margaret Icke were daughters of Robert Icke and Ann Brookes (who married at High Ercall on 12 September 1815). Sarah Icke [

], a son of the above-mentioned Samuel Shakeshaft, on 4 May 1852 (William and Sarah’s gravestone is pictured right).  William and Sarah’s son Edwin Wilfred Shakeshaft married Mary Brookes, who was a daughter of John Brookes and Charlotte Emma Atcherley and consequently also a descendant of Sarah’s paternal aunt and maternal uncle.

], the only surviving son of John Titley and Mary Atcherley, on 2 February 1852 at High Ercall. Thomas and Elizabeth had a daughter named Mary Jane Titley [

Oh what a tangled web they wove, when first they practised to betroth! To illustrate and hopefully make some sense of this tangled web of weddings I have produced a Kissing Cousins chart (in PDF format, with a link back to this article).